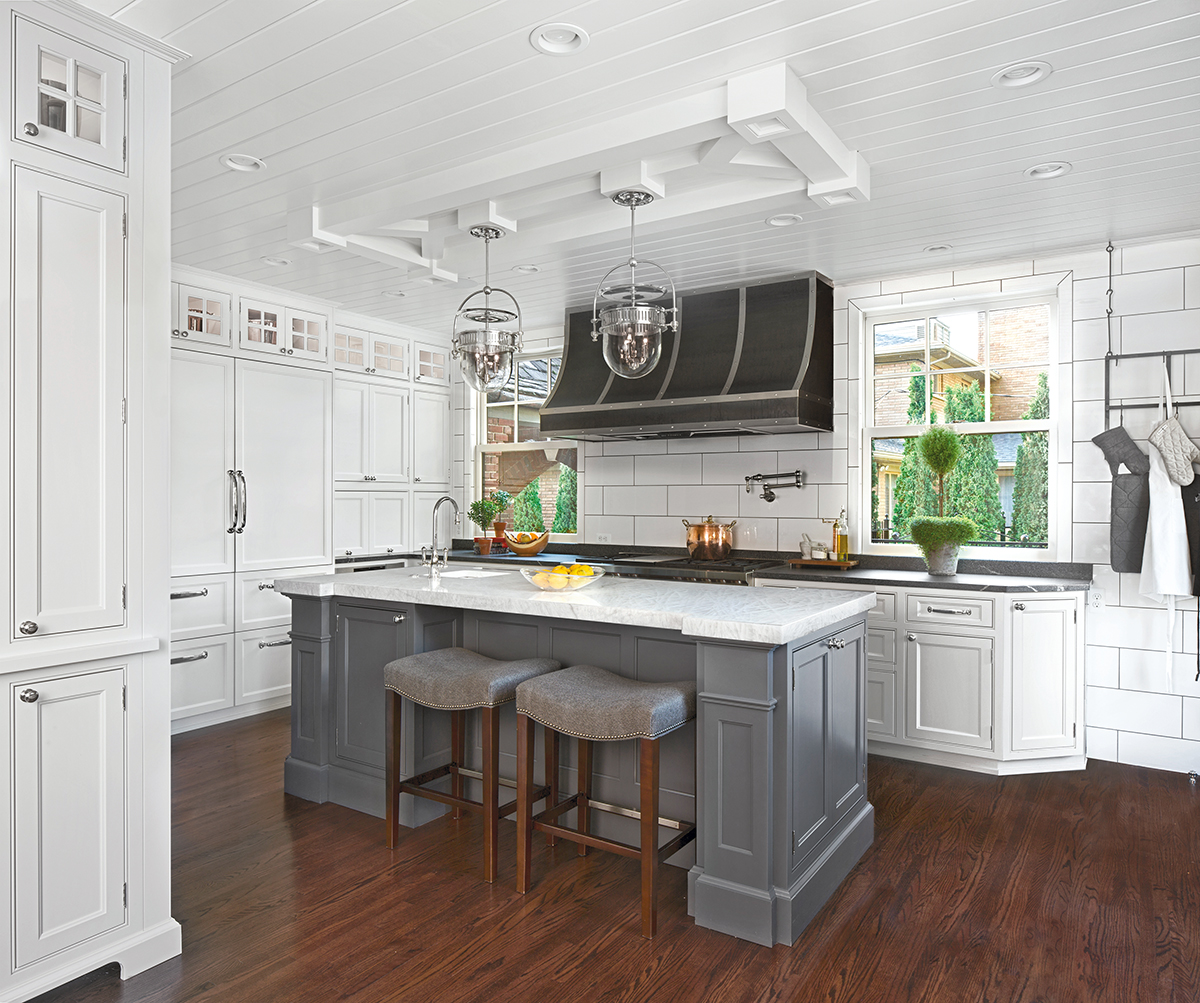 The remodel of this 90-year-old home in prestigious Palmer Park was managed by the interior design team of Arturo Sanchez and Barry Harrison of Art-Harrison Interiors and features a period-based kitchen with cabinets designed by E.W. Kitchens and built by Amish-made Ayr Cabinetry.

DETROIT — Heritage is important to James Eathorne. It can be heard in his voice when he speaks about his father Quentin Eathorne, and is reflected in his words when he relays the story behind E.W. Kitchens, the family business the elder started 70 years ago that he proudly runs today.

Originally a contracting firm that was one of the first Formica laminate distributors, E.W. Kitchens changed direction 30 years ago when James Eathorne took the reins from his father as general manager and CEO. The younger Eathorne pursued the custom cabinetry side of the kitchen and bath company, but it took a few years and some adjustments before that move paid off.

“Back then, there was a two-spot business model: We would buy cabinetry from the manufacturers who would only sell through distribution, and then we would sell to the kitchen and bath dealer,” Eathorne explains. But, within five years or so, the business wasn’t progressing because manufacturers started selling directly to dealers. That’s when the switch was made to provide cabinetry to builders and remodelers – people in the business.

Today, E.W. Kitchens operates two showroom locations in the Detroit area, with Mouser Custom Cabinetry as its primary line. “It’s the product that put us on the map as the go-to cabinet showroom for custom kitchens in Metro Detroit,” Eathorne reports.

Between the two showrooms, the company employs 26 people, including seven lead designers, two of whom are CKDs and three of whom are degreed interior designers. The designers have a combined 170 years of experience designing custom cabinetry.

“So, E.W. Kitchens is a second-generation business that evolved from providing materials for custom cabinet makers who built their products to designing, specifying and installing custom cabinetry,” explains Eathorne.

As the company celebrates its 70th anniversary, it is changing once again – consolidating services and looking to the future. As part of its new business plan, the company is moving from operating as two business entities – E.W. Kitchens and Extraordinary Works – back into one single brand, to be known only as E.W. Kitchens going forward.

“We had been marketing two different brands right up until a few months ago,” notes Eathorne. “But, we were spending resources marketing two brands even though everyone knows us as E.W. Kitchens.” So, the decision was made to drop Extraordinary Works.

During an anniversary celebration in November, the firm revealed a new logo, website and brand message to promote its new strategy. The brand’s new tagline – “Imagine That!” – reflects a company-wide effort to serve as partners in remodeling projects and “inject innovation and imagination to turn dreams into reality.”

While changes are in the works, what won’t be changing is how the company’s employees interact internally and with clients.

“During the 1990s, we hired a number of sales/designers, but we eventually realized that the skill set for a person who sold kitchens was very different from the one who designed kitchens,” he reports. To capitalize on this, the company began implementing a team approach when handling a project. “The people who were good at selling sold the client and prospected for business, while those with stronger design skills worked with the 2020 design software and handled the order entry,” he explains.

The collaborative team approach has been in place since 2005, and it’s worked out quite well, notes the firm’s leader. “And, if there is a hurdle or a particular design problem, someone from one of the other teams may help out,” Eathorne offers. “We have a great leadership staff here, and a culture that thrives on people working together.”

Beyond the internal team pairings, a key to the company’s success is its partnerships with manufacturers. Mouser Cabinetry and Aristokraft are the company’s two longest tenured business partners, and products from those lines have served E.W. Kitchens’ customers well. But, while 10-15 years ago price was no object for most clients, more recently customers would come in looking for something else.

“We would have potential clients who were building million-dollar-plus homes, but didn’t want to spend $100,000 on their cabinets,” Eathorne explains. “Or, people were building a second home with a more modest budget, having already done their dream kitchen. We were just letting those homeowners go.”

About a year ago, the company added Yorktowne Cabinetry to help broaden its reach. “The addition of Yorktowne has opened up some opportunities for those with more modest budgets,” he observes. “We now have almost a full option of product for anyone’s budget.”

Through the incorporation of Yorktowne, “we have added 20% to our business.” Eathorne is very positive about the company’s continued work with the brand going forward, and expects continued growth with the line.

And, even in Michigan, the desire for outdoor kitchens is heating up. “It’s very unusual to see a home today that doesn’t have an exterior kitchen almost adjacent to the main kitchen in the home,” he states. Because of this, the company has begun to offer Atlantis Outdoor Cabinetry from CWP for its outdoor kitchen designs.

While Eathorne sees himself directing the firm’s future for another 20 years, he adds that the family’s third generation is becoming integral to business operations. His daughter now handles all the social media for the firm.

There are a lot of new initiatives to manage, including rebranding and marketing E.W. Kitchens. That ‘evolutionized’ brand image will place greater emphasis on the company’s mission to empower its clients to dream big, to challenge its team members to serve bold, and ensure that everyone works together to deliver beauty into people’s homes, Eathorne reports.