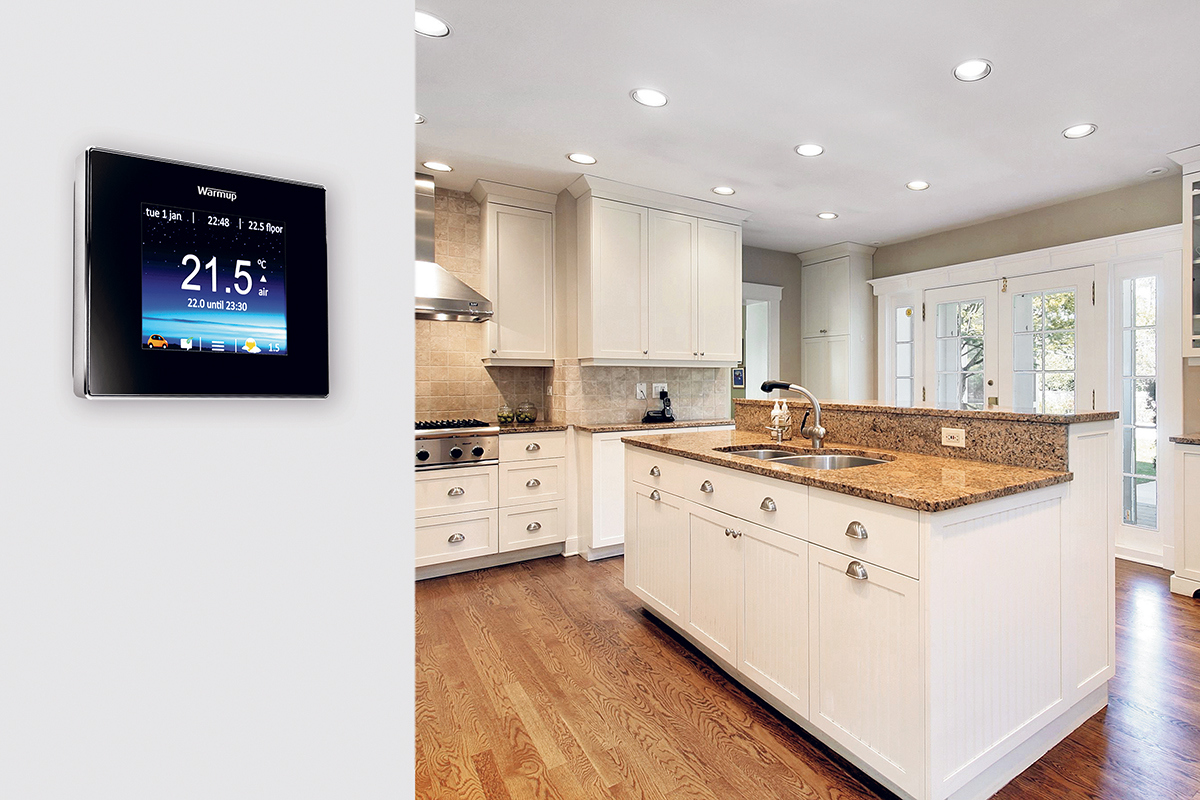 Design & Construction Week made a successful return to the Las Vegas Convention Center in late January. It was the third year for the consciously happy coupling of the Kitchen & Bath Industry Show and International Builders’ Show, with more exhibitors and attendees than ever. That in itself is a positive trend worth noting.

Returning to the KBIS side this year – and contributing to some of the top trends worth spotting – were American Standard, Grohe and AGA Marvel. LG also made a return to the show floor and displayed its new up-market Signature Kitchens line.

While roofing widgets and exterior cladding products won’t entice too many designers to their booths, some of the exhibitors on the IBS side also had notable offerings worth seeing. Did you make it to any of them?

CONTINUING CONNECTIVITY
One of the major trends of the kitchen and bath industry over the past few years has been connectivity. It’s seen in a growing array of products that can be operated via smart phone or tablet, or that integrate their features, such as Bluetooth streaming. It’s also seen in storage options, countertops and outlets accommodating chargers, acknowledging how regularly our devices are used in the kitchen and bath. A perfect melding of old world problems and new world opportunities, Delta’s iDevice can alert your mobile device if there’s a leak under your sink or water heater, and NuTone’s Garage Door Controller will not only let your device know if you left the door open, it can close it for you that way, too.

The latest incarnation of the connectivity trend to hit the residential construction and remodeling sector is geofencing, (also called geo-fencing). Taking smart to a new level, geofencing technology can determine your location via your mobile device and make operating choices accordingly. Using Warmup’s radiant floor-heating system as an example, when your phone gets within a certain distance of the house, the software tells it to start warming the room, so that it’s comfortable when you arrive home. When you head out, it works in reverse to save energy.

LED ON THE MARCH
You might have heard the recent announcement that GE will be phasing out production of fluorescent bulbs completely in favor of LEDs. This won’t come as a surprise to anyone attending DCW; LEDs had a very strong presence at the show. Tresco, Rev-A-Shelf’s lighting brand, showed off a new RF-based under-cabinet line called FREEDiM that can be installed without tearing up a wall.

Even a casual stroll around the exhibit halls showed numerous vanity mirrors with built-in LED lighting. This abundance of low-energy technology is having a healthy impact on costs, as well, and will likely continue to do so as selection increases. It will also help designers in states like California that have ever-stricter energy codes.

INDUCTION EXPANDING
Induction technology is another example of widespread adaption. Not only is it available on more ranges and cooktops, it’s taking new forms, as well. AGA introduced its 48″ Mercury Range at the show, sporting what is likely the industry’s largest induction cooktop at 44″. Viking showed off what might be the smallest. Hidden below the countertop, its Incogneeto induction cooking system can’t be seen at all, but can slow cook or warm up a meal via a trivet you put between your conductive cookware and the counter. (A similar system that operates without a trivet has been displayed at European shows, though it hasn’t come to the U.S. yet.) Even standard induction tops are getting
sleeker, with more flush-mounted models to choose from.

PLUMBING TRENDS
We saw hands-free flushing debut at a previous show and it is quickly gaining acceptance by germ-phobic homeowners. American Standard showed its version this year. Will the other manufacturers without such models be far behind?

One new trend was swiveling lav faucets. KWC and Grohe were showing off these. While swiveling is probably not a feature you need with a standard lav, it could come in handy with the increasingly popular trough-style models.

Speaking of lavs, TOTO and American Standard’s DXV both introduced their own slim-side sink series. Stronger, thinner ceramics made their U.S. debut at a previous show by Laufen. Expect to see more of these sleek options and, as always, beware of inevitable knock-offs that rival style but not construction.

Last but definitely not least is the growing availability of high-efficiency low-flow toilets. It’s no longer rare to find 1.0 gallon per flush models in a product line. TOTO’s booth had an entire wall of them.

ALTERNATIVE FINISHES
Manufacturers are still looking for the next stainless or polished chrome/brushed nickel leader in the appliance and plumbing spheres. While those finishes are as strong as ever, you do have more alternatives to choose from than ever. On the plumbing side, bronzes, coppers and golds were easy to spot and lent a warm glow to the faucet scene. Even a pewter finish gave an old-new update to the silver scene. On the appliance front, Monogram was the latest entrant with its Graphite series, and Elmira Stove Works expanded its vintage color series to its first range.

LAST WORDS
You couldn’t walk the KBIS side of the show without spotting a gray or taupe surface somewhere within eyeshot. This color trend was not only visible (and cited in the 2016 National Kitchen and Bath Association Design Trends Report), it was absolutely dominant. Many of the attendees at this year’s show are probably too young to remember earlier dominant trends: pickled oak cabinets and avocado appliances. Does more need to be said about following color trends in design elements designed to last 10 to 20 years?