Kitchen Accommodates Groups of All Sizes 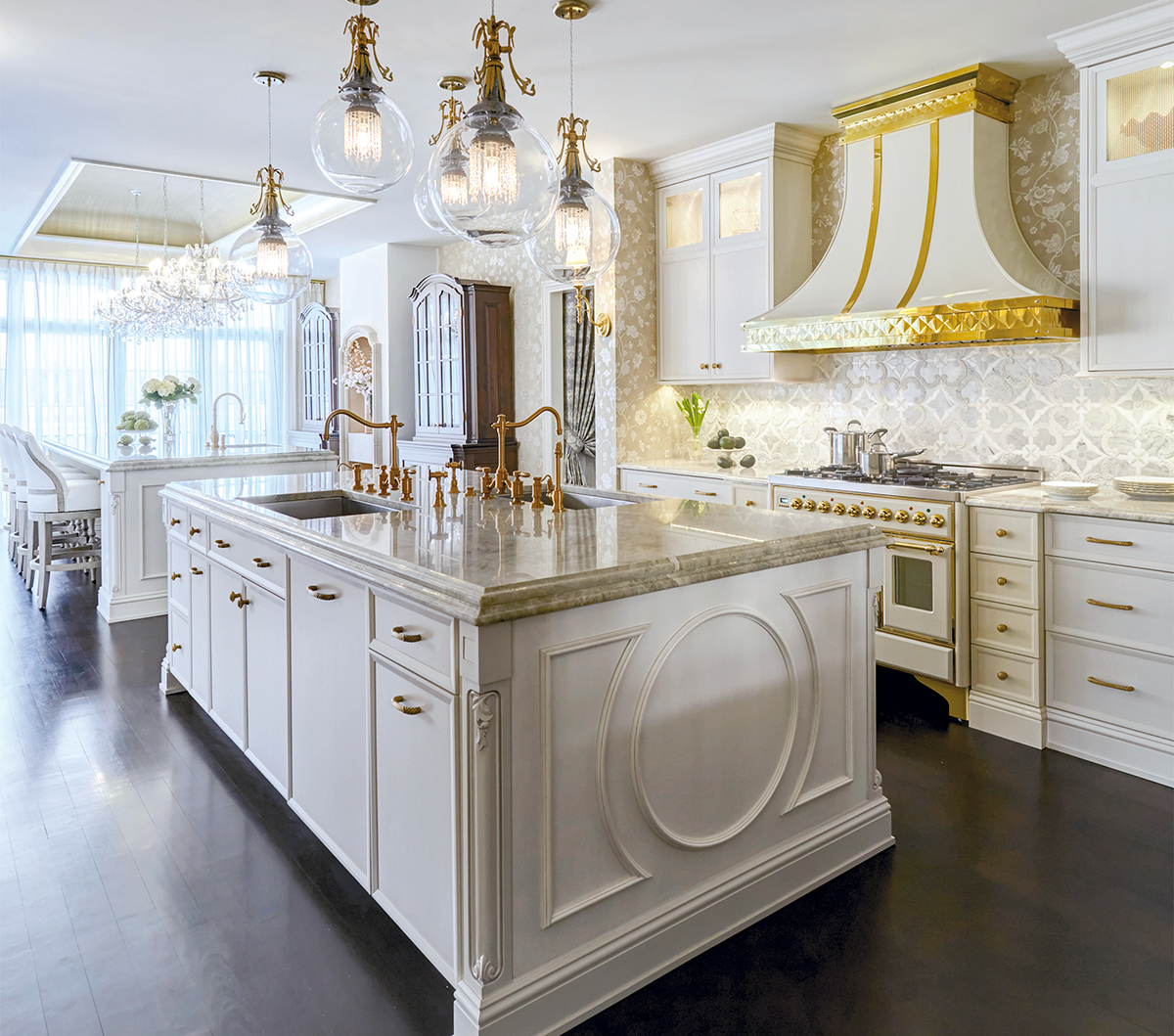 Highland Park, IL — Designing a kosher kitchen is challenging enough given the need to create a space that can accommodate a separation of dairy and meat during prep, cooking and cleanup. However, Rick Glickman remained unfazed, even when given the extra task of remodeling this Skokie, IL kitchen so it could not only function efficiently on a relatively small scale for his modern, Orthodox Jewish clients and their three young children, but also routinely accommodate large gatherings.

“My clients have a large extended family,” says the designer/president, Dream Kitchens in Highland Park, IL. “They are also very active in their community and they host many philanthropic events. Often, they offer their home as a venue, free of charge, for charities with gatherings of up to 150 people. She also often cooks kosher meals for fellow members of her synagogue who are sick or in need, so between everyday family meals, weekly Sabbath dinners, Jewish holidays and catered events, this kitchen gets used heavily on a daily basis.”

The dairy cooking area features a cooktop and single oven that are flanked by tall, pull-out pantries. Designed to blend rather than compete, it includes a custom ventilation hood crafted to match the cabinetry. Glickman positioned the refrigerator and freezer between the meat and dairy cooking areas, providing easy access from either side of the kitchen. To give the appliances furniture-style appeal, the designer paneled them with walnut and antique mirrors.
Photos: Michael Alan Kaskel

To be effective for both small-scale daily cooking and large-scale charity and family events, Glickman focused on creating work triangles centered around a pair of islands within the traditional/eclectic kitchen, which was part of a larger, three-floor renovation project that also included the dining room, secondary eating area, multiple bathrooms and closets, two outdoor kitchens and an art room. Within close proximity to the kitchen, Glickman also created a new walk-in pantry, which features an abundance of pullouts and bins for ultimate organization, as well as extra beverage and bulk storage. Dream Kitchens was also responsible for all the flooring and millwork while an interior designer was hired to specify finish selections, light fixtures and furniture.

“In the kitchen, we wanted to fulfill kosher requirements while providing entertaining space, without making it tiring for my client to facilitate food preparation, especially when it was just her family,” he says. “We didn’t want her to be exhausted running around a large kitchen preparing smaller family meals.”

While the double islands complement each other, they were designed to coordinate rather than match.

“We wanted the islands to relate to each other, but they have different functions so they aren’t exact copies of each other,” he says.

The main island is divided into two sides that essentially mirror each other. One side is for dairy prep and cleanup while the other side is for meat. Each is equipped with a Miele dishwasher, a trash pullout, plenty of storage and an Artisan sink, which is accented with a Waterstone faucet in a Classic Bronze finish. Pop-out outlets concealed in recessed receptacles within each of the island’s corner pilasters provide handy but hidden power.

The second island is for parve (‘neutral’ foods such as fruits, vegetables, fish and eggs) prep and for serving when Glickman’s clients host large gatherings.

“She often uses this island for buffet serving since it also offers seating,” he says, noting its close proximity to the newly designed secondary eating area that features a paneled ceiling.

The kitchen’s second island is positioned adjacent to an eating area that features a paneled ceiling. The island is used for prepping parve foods and for serving when Glickman’s clients host large gatherings. It includes a beverage refrigerator, microwave, sink, storage and seating.

The designer equipped this island with a Sub-Zero beverage refrigerator, a Sharp microwave, an Artisan sink with a Waterstone faucet, recessed pop-out outlets and more storage. A barrel ceiling above, which is wallpapered and accented with a trio of decorative chandeliers, adds a special touch. This area is also highlighted by a fireplace flanked by a pair of walnut hutches that are custom designed with arched tops that echo the curved top of the fireplace.

“The fireplace is unique in that it is raised to 36″ high so it is at eye level when guests are seated at the island,” he says.

Both islands are crafted from custom white painted/glazed Dream Kitchens cabinetry with captured inset construction and walnut drawer boxes. Glickman accented the cabinetry with Edgar Berebi hardware in a Florentine Gold finish and Swarovski crystals for added sparkle and topped the islands with Bianca Perla quartzite with a double ogee edge profile.

“Quartzite is a popular material right now, and we wanted to give my clients something special,” he says. “They wanted a high-style kosher kitchen that matched the aesthetic of the rest of their home, so we made sure to include beautiful materials.”

The kitchen’s perimeter also features several distinctive pieces, including the custom ILVE dual-fuel range that is located close to the meat prep/cleanup side of the main island. It is flanked on each side by base cabinets painted to match the range’s enameled finish, distinguishing them from the rest of the kitchen. Their pull-out functionality provides easy access to spices. While these cabinets stand out, Glickman used a drawer head painted in the cabinetry’s dominant color to conceal the Thermador warming drawer so it blends with the rest of the cabinet drawers.

Pop-out outlets in the islands provide handy but hidden power.

A custom Modern-Aire ventilation hood is highlighted with brass, which coordinates with the adjacent upper cabinets that feature mesh inserts crafted from the same metal. The dimensional backsplash, comprised of Carrara marble mosaic, gives this cooking area focal-point status. Incorporating pop-out outlets in the bottoms of the wall cabinets eliminates the need to include any outlets within the backsplash to maintain an uninterrupted continuity.

The secondary cooking area, positioned on the opposite side of the kitchen and across from the dairy side of the main island, features a Wolf cooktop and single oven that are flanked by tall, pull-out pantries. Designed to blend rather than compete, it includes a more subdued ventilation hood, which is crafted to match the Dream Kitchens cabinetry. To tie it back to the focal-point cooking area, Glickman included brass mesh inserts in the upper cabinets and repeated Carrara marble as the backsplash, which in this area is mixed with natural stone.

The designer positioned the Sub-Zero refrigerator and freezer between the two cooking areas, providing easy access from either side of the kitchen. To give the appliances furniture-style appeal, Glickman paneled them with walnut and antique mirrors.

“They were designed to look like accent furniture,” he says. “Using walnut, which is a ‘hot’ wood right now, ties them back to the hutches used at the other end of the kitchen as well as to the interiors of the drawers. Bringing in another color to contrast with the white cabinetry also helps break up the large room.” ▪