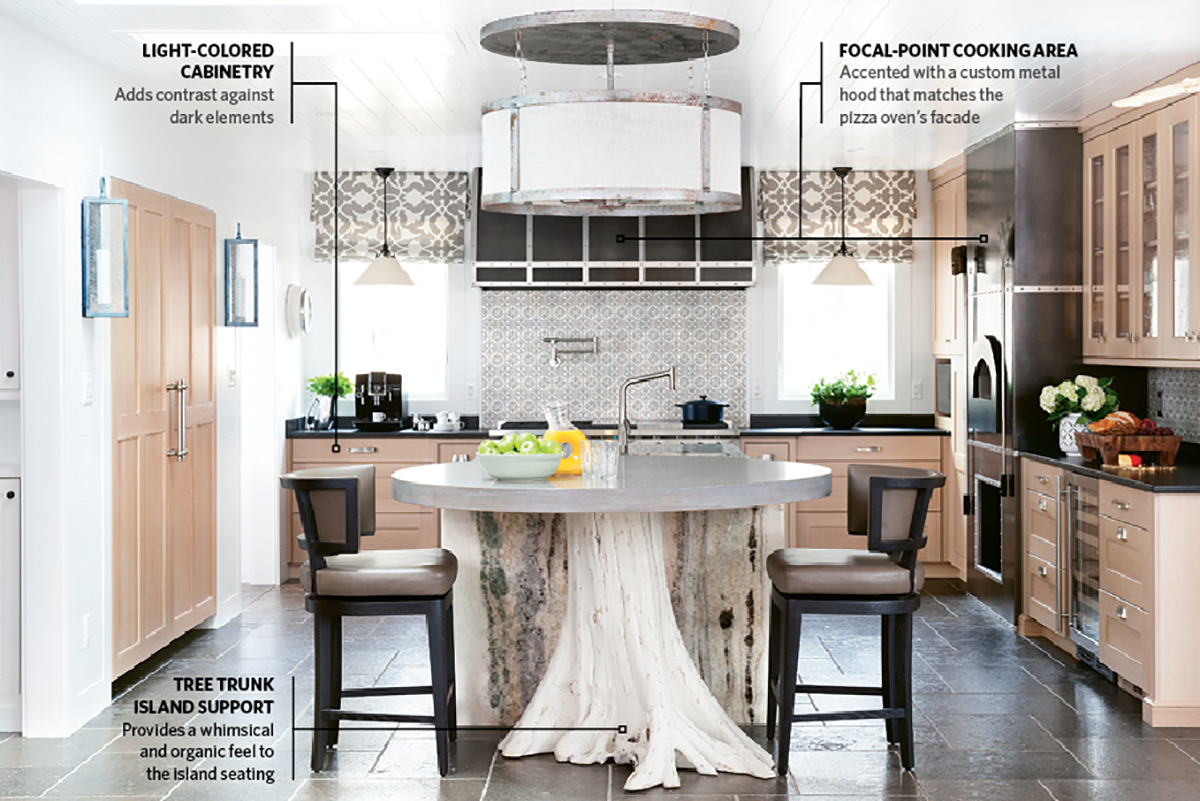 POTOMAC, MD — Extensive appliance wish lists can challenge even the most creative kitchen designer. This is even more evident when the designer is tasked not only with integrating the essentials and a few extra indulgences, but also expected to maintain optimum functionality and flow – without sacrificing aesthetics.

But the most difficult appliance to integrate was the wood-fired pizza oven, which was a steadfast requirement of the husband who loves to cook for his wife and four children.

“Their extensive selection of appliances was a big challenge…and so was the large scale of the appliances, with a 60″ range, 6′ of built-in refrigerator/freezer space (36″ for each appliance), a 48″ wide x 48″ deep pizza oven and two dishwashers,” says the designer with Jack Rosen Custom Kitchens, in Rockville, MD.

To maintain flow throughout the kitchen, Shashaani carefully positioned each appliance in a location that offered minimum interference with each other so multiple people can work in the kitchen without being in each other’s way. As an example, the refrigerator and freezer are positioned in relative isolation on one side of the kitchen, providing the ability for someone to grab something quickly without disturbing anyone else. Continuing around the perimeter of the kitchen, she added the coffee station with dedicated countertop space next to the focal-point range and ventilation hood, which sit between two windows that were added during the renovation to provide brightness and symmetry.

Rounding the corner, the designer sandwiched the potentially cumbersome pizza oven between the microwave and wine cooler, taking advantage of the ability to recess some of its depth into the screen porch behind it to limit its projection into the kitchen.

“It wasn’t easy to accommodate the pizza oven because it is very deep,” she says. “By recessing it into the screen porch, it’s now close to the cabinetry and countertop depth.”

Its location also allows other elements to shine. “It’s really a matter of juggling,” she points out. “I didn’t want a bulky appliance to take away from the windows, range and ventilation hood on the back wall. The area in front of the pizza oven also needs to be fairly open so they can use the long pizza peel and not interfere with everyday kitchen function.”

Shashaani located the warming drawer – concealed behind an integrated drawer front panel – and two dishwashers in the centrally located island, one to each side of the sink. Across from the dishwashers, she added dish and glass storage, which is just a few steps from the dining table in the adjacent room.

“Everything had to be planned so appliances are located in different areas of the kitchen, yet still reachable if several people are in the space at the same time,” she notes, adding that ensuring wide traffic paths and comfortable work zones was also paramount.

The extensive appliance wish list, as well as minimal wall cabinets, negatively affected the availability of storage space, so Shashaani added a tall cabinet next to the pizza oven to accommodate daily-use pantry items. To provide additional storage, she replaced the rarely used butler’s pantry in the previous kitchen layout with a new walk-in pantry behind the refrigerator and freezer. In this area, she also included a charging station and desk space that is concealed behind a barn door.

With functionality and traffic flow addressed, Shashaani enlisted the help of Don Bostick, Bostick Design, LLC, in Montgomery Village, MD, to assist with the finish selections.

As the kitchen’s base, they selected bluestone limestone for the floor. The mix of large-format squares and rectangles creates a fun, interesting and organic pattern, notes Shashaani, who adds that the natural stone is easy to maintain.

Other dark hues include the ventilation hood and façade of the pizza oven, custom fabricated by AK Metal. “We designed the kitchen around the pizza oven, and it gets used a lot,” he says, noting its metal face evokes the natural, modern look they were hoping for. The metal was also used to accent the fireplace in the adjacent dining room to tie the rooms together.

The duo contrasted the dark surfaces with a relatively light-colored quartzite on the island top. The one-of-a-kind slab showcases dark, dramatic veins flowing within a light background that complements the colors of the kitchen, particularly the grays and tans, according to Bostick. A waterfall edge on each end provides a contemporary feel.

To add a touch of whimsy, as well as an organic feel to the room, the island seating area features a cozy and casual circular oak top supported by a cypress tree trunk. “It’s a cool way to add a natural element to the space,” says Bostick. “It’s definitely something that is unexpected.”

The top is custom made by Van-Walker Woodworking and features a radiating center design and gray finish, while the cypress base, supplied by Groundwork, boasts a complementary whitewash finish. A custom light from Low Country originals shines above. “The wood top’s pattern is beautiful and the color picks up the etched marble backsplash tile nicely, carrying the light gray tones around the room,” adds Shashaani.

Rift-cut white oak cabinets from Rutt Cabinetry also provide a light element. “We knew we wanted wood cabinetry,” says Shashaani. “Don and I both felt like we needed something to warm up the gray. These cabinets have a bit of grain as well.

“The cabinet color provides a nice contrast with some of the dark elements,” she continues. “Dark wood was out of the question because it wouldn’t go with the floor selection, and natural cabinets would have looked unfinished, so these rift-cut cabinets are a nice touch. Light-colored cabinetry is becoming very popular now. I see a lot of homes going back to the bleached look.”

The recessed-panel doors feature a small bead around the center panel to provide a transitional feel, while the Schaub & Co. cabinet hardware resembles jewelry, literally. “There are differing styles [of knobs and pulls] throughout the kitchen,” says Bostick. “One of them looks like half of a cuff bracelet with a hand-hammered finish for an artisan look. These clients wanted something different for their new kitchen, and they were open to doing some unusual things. They gave us a lot of creative leeway to do something fun, which resulted in a great project.”▪