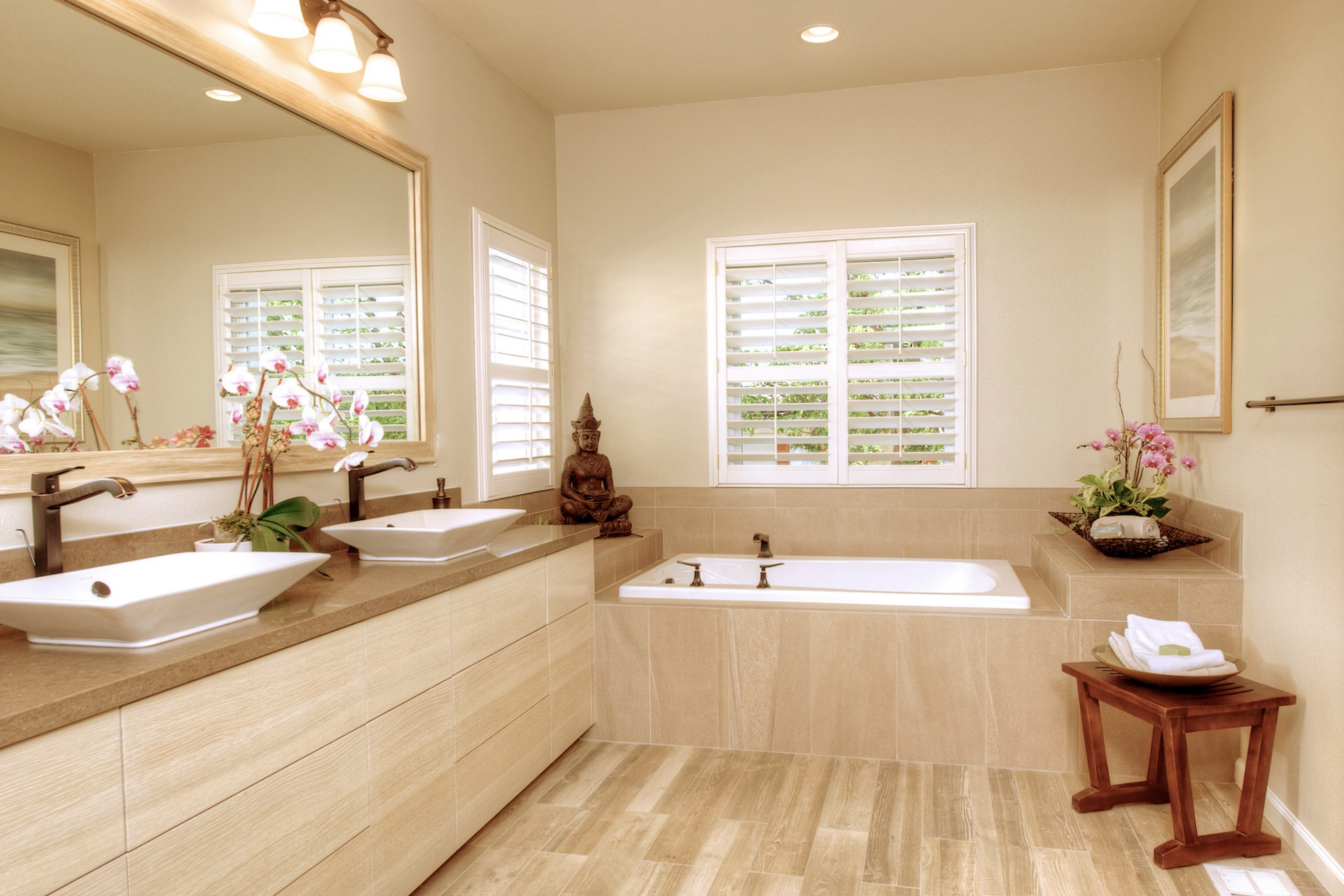 Rectangular vessel sinks add sculptural interest and dimension while emphasizing the linear grain of the vanity; a bleached, rift-sawn oak vanity fulfills the homeowners’ desire for a serene, natural and Zen-like aesthetic; and ‘neutral’ porcelain tile behind the tub resembles wood and shifts the space toward a cool color palette.

Inspiration for design projects can come from just about anywhere – or anything. In the case of this Napa, CA, master bath remodel, it came from the homeowners’ frequent trips halfway around the world to visit their daughter in Asia.

“Style-wise, they developed an appreciation for a peaceful, harmonious ‘Zen’ ambiance from their many trips,” says Patti L. Cowger, owner of PLC Interiors, also in Napa. Words like ‘serene’ and ‘natural’ defined their general vision. So did sculptural elements such as their daughter’s unusually shaped vanity sinks. “They also emphasized the need for easy maintenance and aging-in-place strategies,” she adds.

With this ‘guidebook’ in hand, Cowger and Steve Silva Plumbing, who served as the contractor for the project, set out to transform the 15-year-old bath with its builder-grade materials into a space with an updated style, customized for better function and more pleasing aesthetics.

FOCUS ON UPGRADED MATERIALS
Since the original floor plan was highly functional, Cowger was able to maintain the original footprint, focusing on upgrading the generic materials while expressing the homeowners’ own style and adding individualized amenities.

Some of the first decisions centered around the flooring and vanity. Cowger had originally entertained the idea of keeping the original tile, but opted to replace it with Fioranese Cottage Wood porcelain tile, which the homeowners selected in less than two hours. Its 6″x36″ linear design resembles wood in multi-grey and beige tones that shift the space away from the original warm, terracotta colors to a more neutral and cool palette.

The color scheme also complements the custom-designed and custom-built rift-sawn white oak StoneHill Woodcraft vanity, which Cowger set in a horizontal direction to fulfill the desire for a serene, natural and Zen-like aesthetic. “I drew all nine drawers the same height and two doors of equal height that lined up with the drawers,” she says. “This design reflects balance and continuity.”

European construction minimizes the visibility of frames around each drawer and a bleached finish satisfies the clients’ wish for light cabinetry that was not painted. “The finish they selected was first bleached, then lightly brushed with white paint which was quickly removed before being finished with a protective topcoat,” she says. “The result was the light coloration they wanted.”

To incorporate the aging-in-place elements her clients also wanted, Cowger added tap-open mechanisms to all of the doors and drawers. “Each opens with a mere push and eliminates any fumbling with handles or knobs,” she says. “As a bonus, the absence of decorative hardware on the vanity emphasizes our clean and serene intention and keeps the fronts of the vanity clean and uninterrupted.”

Cowger topped the vanity with Caesarstone Wild Rice quartz with a simple, straight profile that maintains a Zen appeal. Its dusty-brown coloration contrasts with the white oak. “Since the color scheme is tone-on-tone grey-beige, the brown quartz adds a grounding contrast,” she says.

SCULPTURAL INTEREST
To bring in the sculptural interest her clients wanted, the designer added two Kohler vessel sinks, accenting each with a Hansgrohe single-handle faucet. “The sinks automatically add dimension,” she says. “Their rectangular shape emphasizes their stylized lines as well as the linear grain of the vanity.”

The height of the vessels necessitated the tall faucets, which add architectural and graceful stature. “They also trigger an aging-in-place feature by operating with a single, easy, ergonomic handle,” she says. “I also purposely chose an oil-rubbed bronze finish instead of nickel to add depth and a pop of color.”

Initially Cowger planned to highlight the sinks with two mirrors, one above each sink. “My reasoning was more practical than design oriented,” she says. “The vanity is 100 inches long and I had frightful visions of installing a mirror big enough to complement it. But during one of my trips to check on progress, we revisited the subject and agreed that one large mirror would reflect more light from the windows and just ‘feel’ better.”

Cowger edged the single mirror with a MirrorMate frame, highlighted with a faux-finished wood made to resemble bamboo. “That finish inspired much of the design of the space,” she says. “It led to the design of the vanity, its custom finish and the room’s entire coordination of color and texture.”

SERENE AMBIANCE
While city codes would not permit a barrier-free shower – which would ideally suit aging-in-place concerns – Cowger lowered the threshold of the new shower by several inches, making it easier to step over. She also added a shower bench, topping it with a single slab of Wild Rice quartz. “While solid slabs on vanity tops are the norm these days, using them on other areas eliminates a lot of grout lines,” she says, noting the addition of quartz to the half-wall as well.

The shower walls feature Kenai Sand 12″x24″ gray porcelain tile, finished with a tiny grout line in a coordinating color. “With little or no pattern, the tile maintains a serene ambiance,” she notes. “It also has the same value in hue as the floor tile to circumvent any possibility of jolting contrasts or conflicting focal points.”

Initially Cowger planned to set the tile in a horizontal pattern to flow with the grain of the vanity, providing for serene consistency. “But after sketching the shower in both directions, staggered and not, we agreed that there was something regal and contemporary about a vertical, non-staggered installation,” she says, noting the vertical set also eliminated the need for a horizontal row of grout on the tub skirt, which also utilizes the same tile.
Cowger finished the shower with a floor comprised of multi-gray and beige Venetian Spliced Pebbles river rock. “It’s very spa-like and is a nice accent to all of the rectangular tile,” she states.

Thinking ahead, Cowger noted placement for grab bars should they be needed at some point in the future. Improved lighting – with two wall-mounted fixtures above the sinks as well as can lights in the ceiling and shower – adds to aging-in-place design and complements the natural light flowing in from the windows onto three walls.

“Overall, the whole space is a unified design,” she says. “I strive to design in a way that one’s eye first notices a room as a whole, then sees its general parts and lastly zeroes in on the details. In this bath, the general parts are the custom vanity and mirror as well as the interesting wood-look floor tile. The details and ‘punch’ are the vessel sinks, tall faucets and pebbled shower.”