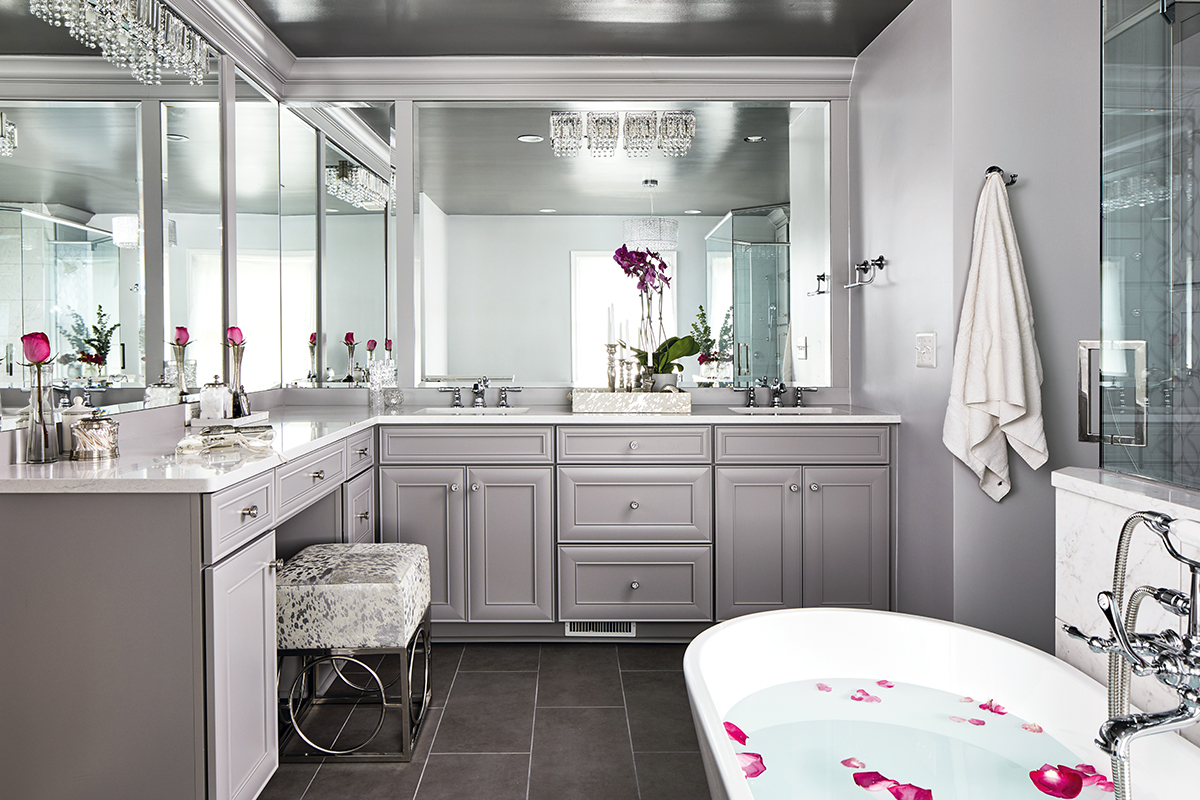 Rockville, MD — Initially, the owners of this Rockville, MD home were only going to renovate the kitchen after they purchased an older home in their dream neighborhood. However, once they saw the plans that April Case Underwood and Elena Eskandari drew up for the master bathroom, they knew they had to move forward with both projects without delay.

“The bathroom was supposed to be a down-the-road project, but they fell in love with the proposed design and just had to go for it right away,” says Underwood, CR, CKBR, GAC, director of project development at Case Architects & Remodelers with locations in Maryland, Virginia and Washington, D.C.

To enhance symmetry, Underwood and Eskandari included two entries into the shower, one on each side, while dual benches and showerheads create a his/hers environment. A niche offers storage for toiletries.
Photos: Stacy Zarin Goldberg

The immediacy of the renovation meant the designers, who worked with Justin Speer, project manager at the firm, had to be mindful of money to keep the project under a certain budget…without compromising the original design.

“I think this bathroom is a great example that shows you don’t have to have the most expensive materials to create a luxurious feel,” says Eskandari, allied member ASID, CKBR, UDCP, designer/interiors specialist.

“When our clients decided to renovate the bathroom in addition to the kitchen, they wanted to find money in their budget to do both projects, so we steered them toward more modest products,” adds Underwood. “It can be a challenge with a more limited budget, but I think the room is a great example of affordable and timeless luxury.”

A better use of space

Fortunately, they could maintain the same footprint for the relatively large space so no funds needed to be allocated to adding square footage. However, the designers did need to totally revamp the layout.

“The room was square shaped with a lot of wasted, open space in the middle,” says Eskandari. “It also had a teeny tiny shower in the corner and a giant sunken tub that made the ceiling shorter and created a step-up from the bedroom. Storage space was almost non-existent as well, and builder-grade, off-white tile was everywhere, but the room had nice depth to it.”

After removing the raised floor to create one level with the bedroom, the designers turned their attention to the layout. Both knew the room’s shape would give them the perfect opportunity to create a spacious shower with a striking accent wall that would serve as a backdrop to the freestanding tub positioned in the foreground.

“The tub and shower are centered on the door so when you walk into the space, they are the first things you see,” says Underwood, noting that the arrangement also better utilizes the space in the middle of the room.

An oval freestanding tub softens the room with its organic silhouette and plays off of the accent wall.

Because of the shower’s focal-point status, the designers paid special attention to the shower’s accent wall, choosing to use Viviano Mosaici Carrara Thassos Hera waterjet marble mosaic that cascades to loosely form ‘ribbons.’ The pattern is made more visually prominent by setting it within a frame of quieter large-format 12″x24″ Carrara marble-look porcelain tile that contrasts against the darker 2″x2″ gray mosaic porcelain tile on the floor.

“Our client wanted something striking that gave a spa-like feel with gray and white colors,” says Underwood.

“The pattern is very timeless,” adds Eskandari. “And since we used gray and white, it will last longer. It isn’t super trendy.”

To create a sense of symmetry, the designers included two entries into the shower, one on each side, while dual benches and showerheads create a his/hers environment. A niche, recessed into the pony wall, offers a place to store toiletries.

“We like to hide our niches so when you walk in, you don’t see all of the bottles of shampoo and conditioner,” says Eskandari. “You can repour them into nicer bottles, but most people don’t want to do that so hiding the niches keeps products nicely tucked away.”

Because of the room’s square footprint, the design duo chose to include an oval freestanding tub from Signature Hardware, which softens the space with its organic silhouette.

“We wanted something without sharp corners,” says Underwood, adding that its shape also works better for where the tub is placed within the room. “It also plays off of the focal-point tile on the shower wall.”

Accenting the tub with a wall-mount filler – specifically a Newport Brass filler in a Polished Chrome finish that is plumbed into the pony wall – helped control costs.

“We wanted to be conscientious of the budget and tub fillers aren’t cheap,” Underwood indicates. “A wall-mount one is typically a little less than a floor-mount style…and we already had the wall so we took advantage of it.”

Improved storage was also a consideration in the remodel, so the designers addressed their clients’ concerns with Waypoint Living Spaces’ Duraform cabinetry in a Stone colorway. This was topped with Cambria’s Weybourne quartz, which offers a relatively calm veining pattern with minimal movement so as not to overwhelm the room.

“These cabinets have a nice door style and they will hold up well in wet areas,” says Eskandari. “Plus, they are priced modestly compared to wood.”

Originally, they had planned for wall-to-wall cabinets, but ultimately opted for an L-shaped layout with dual Mirabelle sinks and Kohler faucets in Polished Chrome finish on one wall and a make-up station with seating on the other.

“It made a huge difference in the overall design and use of the space,” says Underwood.

While designers sometimes lower the seating area, Underwood and Eskandari chose to keep it at the same level as the rest of the vanity top.

“We don’t usually drop that area because it breaks up the design,” says Eskandari. “There are also a lot of stools available so people can find one that gives just the right height.”

To improve functionality, the designers incorporated a hair station with outlets and a pull-out trash bin. Adding tall linen cabinets near the shower, one at each entrance, offers easy access to towels.

“They provide more storage than the small closet that was there before,” says Eskandari. “And the contents are more easily accessible because they have roll-out shelves.”

Adding millwork, including crown moulding, frames the mirrors and dresses up the vanity area while creating a more finished aesthetic. To further the level of sophistication, they added a bit of bling with crystal knobs for the cabinetry and crystal lighting for the ceiling, which is painted a dark gray that mirrors the dark gray floor.

“I love painted ceilings,” says Underwood. “Everyone always seems to do white, but I think the dark gray makes the room look very elegant, and it creates a warm ambiance for the space.” ▪