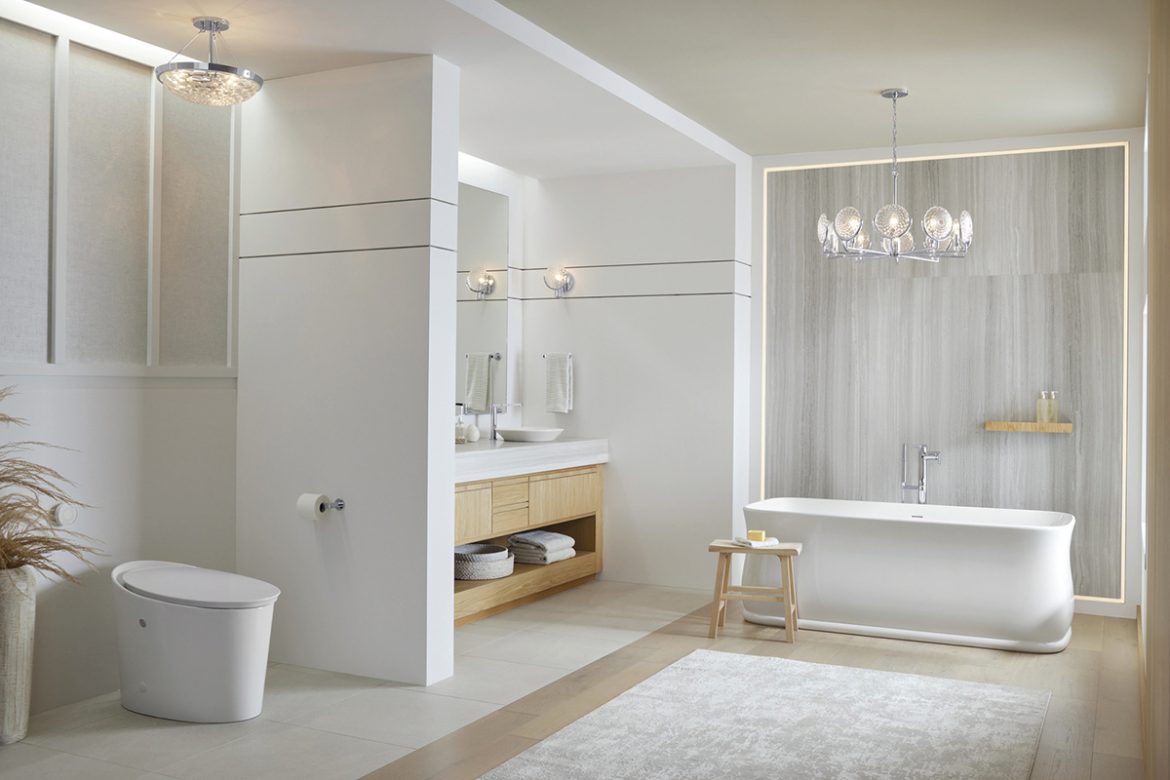 White continues its dominance in the bathroom, with wood vanities also leading the way, according to Houzz. Photo: Kohler

PALO ALTO, CA — Homeowners, driven by both aesthetic desires and functional necessities, “are doubling down” on their investment in remodeled bathrooms, with vanities increasingly assuming center stage as the primary component for the remodels.

That is the key finding of a major new study about bathroom remodeling conducted by Houzz Inc., the Palo Alto, CA-based online platform for home remodeling and design. The 2022 U.S. Houzz Bathroom Trends Study is based on a survey of more than 2,500 homeowners who are in the midst of, are planning, or have recently completed a bathroom renovation, according to Houzz.

“Bathrooms have always been a top room to renovate, and we’re seeing that homeowners driven both by aesthetic desires and functional necessities are doubling down on their investment in these private sanctuaries,” said Marine Sargsyan, Houzz staff economist.

“While the cost of products and materials has increased due to inflation and supply chain disruptions, renovation activity remains strong, propped up by high home equity and homeowners’ desire to stay put, given limited housing supply,” Sargsyan added.

Houzz’s survey found that more than three-quarters of surveyed homeowners (76%) upgraded their vanities during primary bathroom renovations, “turning vanities into a focal point as one of the few areas of the bathroom to offer a splash of color,” with 30% of surveyed homeowners choosing wood, followed by gray (14%), blue (7%), black (5%) and green (2%), respectively.

Three in five homeowners chose custom or semi-custom options for their vanity.

According to Houzz, increased costs are often tied to projects with major changes such as upgrades to home systems, which remain the most frequent enhancement in the bathroom (62%), up 3% from last year. Top home system projects include ventilation upgrades (59%) and heating installations such as radiant heating and tankless water heaters (14% and 9%, respectively), Houzz said. More than one in five homeowners increased the size of their bathroom during renovations and three in five bathrooms are 100 square feet or more following renovations, the company added.

Additional findings from Houzz’s study include:

Variety in Vanity Design: Among those upgrading their vanities, engineered quartz is the top choice as a countertop material (40%), followed by natural stones such as quartzite (19%), marble (18%) and granite (16%). Shaker dominates in door style (51%), followed by flat- and raised-panel doors (27% and 16%, respectively). Bar pulls are the most popular vanity door handles (61%), followed by knobs and finger pulls (32% and 9%, respectively).

Transitional Style Leaps Forward: Considering that outdated style is the top trigger for bathroom renovations, it’s not surprising that nearly nine in ten homeowners choose to change their bathroom’s style. Transitional style has taken a more substantial lead, followed by modern and contemporary.

•   Solid Colors Abound: White continues its dominance in primary bathrooms across vanities, countertops and walls, though gray walls are popular among homeowners both outside and inside the shower. One in ten homeowners choose blue walls outside the shower. Upgraded bathroom elements are gravitating towards solid colors as multi-colored countertops and shower walls have decreased in popularity among homeowners.

Shower Updates Gain Steam: Consistently popular, shower upgrades are becoming increasingly common during bathroom renovations (84% of those surveyed). When removing a bathtub, nearly four in five homeowners enlarge the shower, often making it at least 25% larger. Over the past year, more homeowners have relocated their showers following a bathtub removal.

Seeing Green: Homeowners are increasingly adding greenery while renovating their bathrooms (35%), up 3% from last year. The overwhelming majority of those surveyed say it adds to the aesthetics of the room, while a smaller majority believe it creates a calming environment. Practical benefits also noted include air purification, odor-fighting ability and antibacterial attributes.