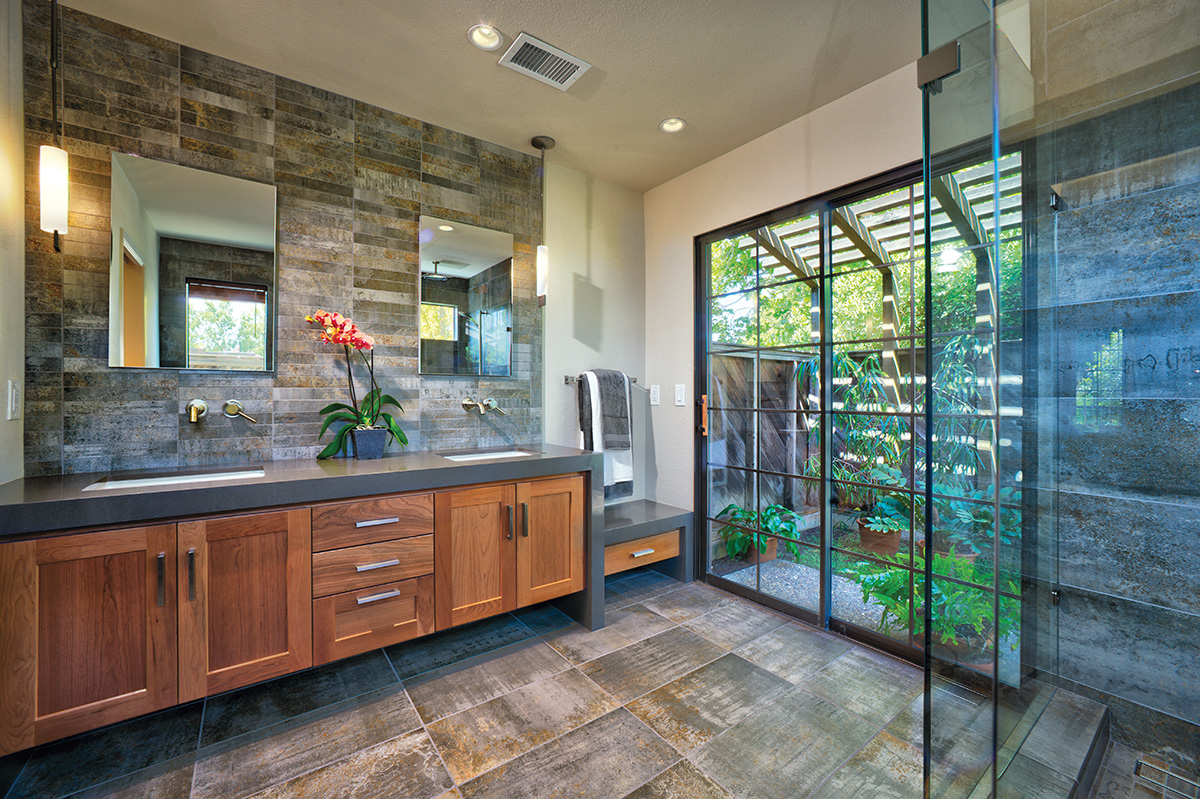 Davis, CA — Often, it takes just one or two design elements or material finishes to influence the entire direction of a new or renovated space. In the case of this Davis, CA remodel, the homeowners wanted a Zen space with an organic vibe that maintained a connection to nature. Elma Gardner, CMKBD, CID, owner/principle of By Design Studio in Davis, CA, achieved this both physically and figuratively in collaboration with J. Hill Construction.

The former was accomplished via sliding glass doors that give the homeowners direct access to their private courtyard, which they often use. “They were determined not to give up those doors, so I had to work within the parameters they set,” she explains, noting that their location created challenges regarding the size and placement of other elements within the space, such as the shower and vanity.

“The master bath had a fairly small footprint, so we didn’t have a lot of options,” she continues, adding that her clients had a relatively extensive wish list that also included a dual vanity, separate makeup station and large, walk-in shower.

To accommodate her clients’ must-haves, the designer completely reconfigured the bathroom, which ultimately affected the adjacent laundry room and closet (see sidebar page 38), since she moved a wall to gain an extra foot of space from the laundry room, which shares a wall with the new dual vanity. Gardner located the makeup area, complete with a sink, in the new custom closet, which is positioned between the master bath and bedroom.

The expansive shower now not only has ample room for two, but it’s also large enough that Gardner could design it with an open concept.

“Their previous shower wasn’t enclosed, and they liked that idea so we made it large enough to eliminate any issues with water [over] splash,” she says.

Adding a single linear window in the shower emphasizes the homeowners’ connection with nature. Its placement and size were specifically chosen to allow visual access while providing privacy.

“There is a Greenbelt walking trail adjacent to the bathroom,” she says. “We positioned the window low enough so my clients could see the trees but high enough to maintain privacy.”

Gardner conveniently located the adjustable hand shower and rain head controls at the shower entrance and added two small hooks that loop over the top of the glass so her clients can hang towels within easy reach as they enter/exit the shower.

“It’s very organic with a rustic, metal look,” she says. “They fell in love with the tile and initially wanted to use it with other styles. But the tile in and of itself is so beautiful that I suggested they use it by itself so it wouldn’t muddy the waters. Using just the one color keeps the room simple, with a focus on the tile.”

To create interest while maintaining serenity, the designer utilized a variety of shapes and sizes, ranging from 12″x24″ on the floor and shower walls to 2″x12″ mosaics on the vanity wall and shower floor and as an accent on the plumbing wall in the shower. Stacking the narrower tile horizontally on the vanity wall elongates the relatively small room and provides a cleaner look compared to laying it in a brick pattern, the designer notes.

“Also, stacking it vertically in the shower brings the eye up to the [Grohe] fixtures,” she adds.

The tile colorway also influenced the cabinetry and vanity top choices, with its hints of rust inspiring the rich Wood-Mode Brookhaven Colony cherry cabinets with a Sierra finish and gray hues guiding the selection of the crisp Caesarstone Concrete quartz top.

The cabinetry’s simple doors and drawers lean toward a Craftsman style, which melds with the rest of the home, while its floating design creates an open feel, which is important for the relatively small space, the designer notes.

The vanity top’s thick 3″ mitered edge mimics the ‘legs’ created by its waterfall edge to promote uniformity and to anchor the vanity. Gardner repeated the quartz as a seat top for the adjacent bench.

Two recessed Robern medicine cabinets double as mirrors above the undermount Ronbow sinks, which are accented with wall-mount Grohe single-handle faucets. Two Hubbardton Forge pendants illuminate the vanity area and complement the recessed can lights in the ceiling. ▪