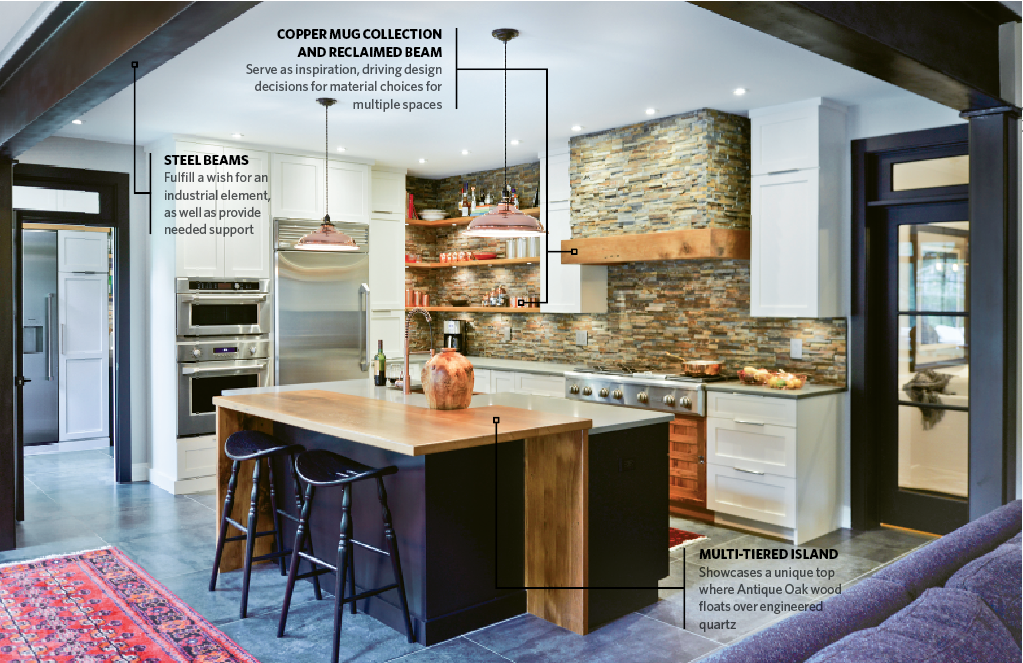 CLIFTON, VA — When clients are brave enough to make bold design decisions, the end result can be a win-win for everyone, even the designer. Such was the case with Sandra Brannock, who was commissioned to transform this kitchen, multi-purpose laundry/mudroom/pantry and powder room into more functional spaces with unique aesthetics.

“You can learn a lot when a client pushes you and allows you go somewhere where many don’t want to go,” says the owner and CPA, AKBD, Expert Kitchen Designs, in Amissville, VA, who created the spaces in collaboration with Brannock Enterprises and RKC Engineering. “It’s hard to find clients who are brave enough to make bold leaps, especially in the DC area where people tend to be a bit more conservative with design. But this client was willing to make decisions that made this white kitchen anything but a cookie-cutter, white kitchen.”

Aesthetically, the heart of the design builds upon inspiration taken from an antique beam the clients had purchased on a whim, as well as a collection of copper mugs the homeowner wanted to display. Brannock was also asked to incorporate ledgestone and at least one element that satisfied an industrial vibe.

“At our first meeting, she brought me downstairs to show me a beam that she and her husband had fallen in love with,” she says. “We hadn’t even designed anything yet, but she knew she wanted to incorporate that beam somehow.”

Unfortunately, it was too warped and misshapen to use – “things need to be straight in a kitchen!” says Brannock. But the designer did use it as inspiration, ultimately finding a reclaimed beam at Shenandoah Furniture Gallery that was incorporated as an accent for the ventilation hood. Reclaimed wood also served as inspiration for additional wood pieces Brannock peppered throughout the kitchen, including floating shelves – which showcase those beloved copper mugs – sliding cabinet doors beneath the cooktop and a unique wood island countertop, all of which were also sourced from Shenandoah Furniture Gallery.

Building upon her client’s copper mug collection, Brannock brought additional copper elements into the space, such as the copper faucet and sink as well as the pendants that hover above the island. Mixing the ‘warm’ metal with ‘cool’ stainless steel, as found in the appliances, as well as with Brushed Satin Nickel cabinetry hardware, proved to be one of those bold design moves Brannock indicates pushed the design envelope.

“I admit that I was hesitant,” says the designer, “but she liked the idea and it proved to be the right move!”

The homeowner also wanted to include ledgestone into her kitchen backsplash, initially falling in love with a collection of light colored stones. “Aesthetically, there are a lot of textures, finishes and colors in the kitchen, so we needed to proceed carefully so as to not lose sight of the ‘whole,’” says Brannock, also adding that a multi-colored, earthy collection of ledgestone sheaths the fireplace in the adjacent Great Room. “I convinced her to stick with the same – or, at a minimum, a monochromatic color that would pull a single tone from the fireplace – in order to integrate the space successfully. She was hesitant but acquiesced and, in the end, she agreed this was the right way to go.”

To make a more dramatic statement, Brannock faced the ventilation hood with the ledgestone and extended it along the entire length of the wall.

Her client’s request for an industrial element is fulfilled by the steel beams that visually, at ceiling height, delineate the kitchen from the eat-in breakfast area and Great Room. The beams also provide support that was needed when Brannock removed a post between the original kitchen and Great Room, as well as shortened the wall between the kitchen and breakfast area.

While aesthetics were important to Brannock’s clients, improving the new kitchen’s function was also paramount, especially as it related to her kitchen sink, which was previously underneath a window in her laundry room directly behind the kitchen.

“If my client was cooking and needed to visit the sink, or vice versa, she would have to cross the room!” she says.

“Her husband used to be a chef, so it was important that he have a ‘proper’ cooking appliance,” she says, adding that additional appliances include a 36″ GE Monogram refrigerator, a GE 15″ built-in Gourmet Clear Nugget ice maker and a GE Monogram wall oven with Advantium Technology.

“Initially she wanted a 48″ built-in refrigerator/freezer, but we just didn’t have enough space for it,” explains Brannock, noting that her clients wanted a number of appliances that challenged the footprint of the kitchen. “Instead, we included the single refrigerator in the kitchen and added a single freezer, with water dispenser, in the laundry/mudroom/pantry. They cook more with fresh foods, so the freezer access isn’t as frequent, nor is it that far away. She also wanted double ovens, but the Advantium Technology gives her convection and microwave capabilities in a single appliance.”

Brannock also gave her client a larger, more functional island, enhancing its aesthetics with an interesting combination wood/quartz top that sits atop a Brubaker Kitchens cabinet base painted in a custom Sherwin-Williams Tricorn Black, which contrasts boldly against the white perimeter cabinets and harmonizes with the 32″x32″ porcelain Evoque Carbon floor tile.

“It’s a cool version of a two-tier island, without being too tiered,” she states, noting that the wood, Antique Oak with a natural stain, floats on top of the Cosmos Granite and Marble Light Silt engineered quartz. The designer purposefully gave the wood portion enough width so anyone sitting at the island can have enough space to set down a drink without having it fall onto the lowered quartz. And, because there wasn’t enough space to fully extend the wood the full length of the island, the designer opted to give it interesting beginning and end points that are ‘stepped’ from the quartz.

“There wouldn’t have been enough space between the island and the wall for an adequate walkway,” she explains. “The stepped top also gives the island a funky, quirky look that totally works in the space.” ▪

Kitchen Pushes the Boundaries of Design