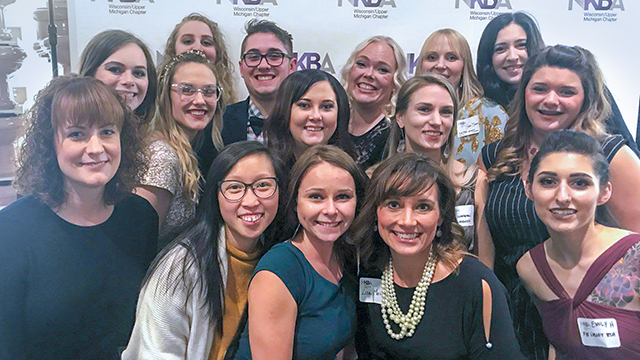 One of the most fascinating conversations to have with any kitchen and bath designer is the classic “so how did you get here?” Some stories present a neat narrative arc from a childhood spent arranging furniture in a Barbie Dreamhouse to a design undergrad degree to firm ownership. Others may have taken a more meandering path, perhaps reinventing themselves professionally after some watershed moment of personal crisis.

Regardless of the route that brought them to the industry, though, most designers’ stories seem to have one element in common: a more experienced professional who took the budding designer under their wing or gave them the chance they needed. Few became successful in a vacuum; at some point, a helping hand was extended to pull them up to the next level in their career.

It was with the critical importance of such connections in mind that the Appleton, WI-based Fox Valley Technical College, in conjunction with the Wisconsin/Upper Michigan chapter of the National Kitchen & Bath Association, established its Student Chapter in 2016. For the past few years, the school has been actively working to connect the students of its Kitchen and Bath program with local professionals in the field through networking events, seminar series and other initiatives.

“I started adjuncting here when they started the kitchen and bath program back in 2011, and I started out with maybe three students,” recalls Lisa Martinek, interior design instructor at the NKBA-affiliated Fox Valley Tech. “Once I was no longer an adjunct and fully employed by Fox Valley Technical College, it allowed me more involved time to grow with the students, so we created the first NKBA Student Chapter. We were the first student chapter to be created in Wisconsin, and mainly we created it to bridge the gap between the professionals and the students.”

Student Joan Watson, who recently took second place in the 2019 NKBA National Student Design Competition, agrees. “For the meetings, they would bring in guest speakers, or we would go offsite and have our meetings at, say, a kitchen and bath store. The benefit [of this] was that you got introduced to a lot of aspects of the kitchen and bath industry, and it was also an excellent way to network and to meet a lot of people and professionals in the industry.”

Now a designer for Valley Cabinet in Neenah, WI, Watson finds that these connections have continued to benefit her in her professional life. “On the job, you come across questions that you don’t know how to answer, but you know somebody who’s familiar with the subject matter and you’re able to reach out to them and get your answers.”

Interestingly, the benefits of these connections appear to be reciprocal. “For the professional members who are involved, the students bring something new to the table – new insight,” Merbeth notes. “One recent graduate from Fox Valley was hired by somebody who said she’d been instrumental in helping with the business’ social media.”

Martinek adds that the professional designers see a return on time investment when they contact her looking for interns or new hires and find a whole host of student designers who are essentially “ready to go right out of the gate,” requiring less hand-holding than a typical new hire might.

While fostering beneficial mentor connections is certainly one of the most valuable pursuits for the Student Chapter, the organization’s activities are also designed to encourage students to take charge of their own educational experience.

According to Martinek, events such as the Fall Speaker Series are completely coordinated by the Student Chapter, with students handling everything from raising funds, to determining topics of interest and inviting the speakers, to working with the school’s culinary department to cater the events.

She says, “Typically about 25% [of the students] just really take charge and they go for it and it shows, and it’s so beneficial to their career. It depends what they want. Some people don’t want that. It’s not for everybody, but we’re giving them the tools.

“[In particular,] the students who have been board members have placed really well in their careers because they put forth the effort and they invested in themselves,” Martinek adds.

Graduate of the program Kimberly Kamke notes that her involvement with the Student Chapter as a board member not only helped her to become a leader, but also taught her more efficient management methods. “I really got to hone my leadership skills [such as] time management and how to delegate, because I’m very much the person that will do it myself,” she explains. “Something I really learned through the Tech was that it’s okay to ask other people to do stuff, too. You don’t have to do it [all] yourself.”

For Kamke, these opportunities to develop her leadership skills have paid off after graduation – not only has she secured a position as a full-service designer with local firm Der Meister Custom Cabinetry, she will also be serving as the 2020 Communications Chair for the NKBA Wisconsin/Upper Michigan Chapter.

So what is this next generation of designers and industry pros shaping up to look like? What can the industry expect from its future? According to Merbeth and Martinek, as well as graduates of the program, they are digitally savvy, highly social aspirational thinkers with a lot to bring to the table.

“They’re very in tune with the online world, but I think that they still appreciate the live environment and I see them engaging in person. They want to have a relationship with both their peers and their clients in person and not just digitally,” Merbeth observes.

“They don’t really appear to be afraid of anything, because they seem to be very resourceful,” Martinek notes. “A lot of them, when they’re doing their kitchen and bath designs in class, they’re really coming up with some unique ideas, and it’s all based on their inspirational research.…If a client were to say to them, ‘Well, I really like what I have now, I just want to do an update,’ they’re not going to settle for just that. They’re going to give them that, but then they’re going to politely try to show them what they also could have.”

Kamke points to her generation’s digital acumen as a definite advantage. “[We] deal with social media networking differently – that was something that [2019 Communications Chair Cathy Driftmier] really liked about me. I’m a millennial, so making posts on Facebook was so much quicker for me, since it’s not something that she grew up doing, whereas it’s something that I did. So I think that having that youthful, more digital thought process is really beneficial for sure.”

Merbeth and Martinek also have noticed a trend toward environmentally and socially conscious design, and the graduates agree. “There are a lot of people out there who want a kitchen that is energy efficient and water saving, and they also want a kitchen that is high tech, and [we’re] able to provide that to the customer,” Watson believes. ▪