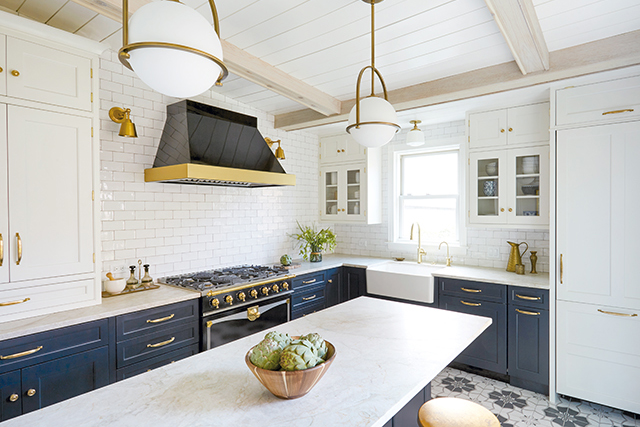 Chicago — Rebekah Zaveloff’s millennial client was excited for her first home, a cute bungalow in Chicago’s Wicker Park neighborhood. While the home had good bones, the kitchen – an addition from a previous renovation – seemed to be an afterthought. Accessed via a step down from the dining room, it was basic and builder grade.

As she considered a remodel, the homeowner wanted something that better reflected her style and would be a fun place in which to entertain friends. She also wanted to bring back some of the historical character that had been lost along the way. 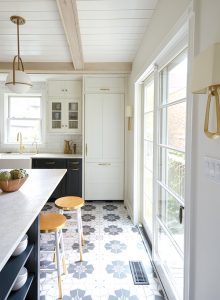 One of the homeowner’s ‘luxury’ items is the paneled refrigerator, which she wanted concealed because it is one of the first things visitors see when they walk into the room.
Photos: Michael Alan Kaskel

While the client wasn’t averse to taking risks on the design, she was budget conscious, which meant some concessions needed to be made.

“We had to be careful not to overinvest,” says Zaveloff, CKD/principal designer, KitchenLab Interiors in Chicago, IL. “She needed a lot done on a minimal budget.”

One of the sacrificed expenses was to remove the wall between the kitchen and dining room. However, during demolition they discovered a window that had been closed up within the wall. Turning it into a doorway created two entrances into the room, allowing a bit more light to flow in.

In the end, the renovation, which included the entire first floor, is a great example of how to mix high- and low-priced materials to create a charming, dramatic space that didn’t break the bank.

For example, one of the splurges is a black La Cornue CornuFé Series range accented with a matching custom ventilation hood by Avenue Metal.

“She wanted a feature range and hood…something that was eye catching,” stresses Zaveloff.

Another ‘luxury’ item is the paneled Bosch refrigerator, which her client wanted concealed because it is one of the first things visitors see when they walk into the room.

Leathered Bianca Perla quartzite serves as the countertops throughout the space.

“When you consider smaller kitchens, it may be possible to splurge on something that might otherwise break the budget on a larger job,” she says. “Plus, this stone adds such a nice warmth to the space, and I’m a big fan of mixing ‘warm’ and ‘cold’ elements.”

On the more conservative end of the budget spectrum is the flooring, which is Merola’s Twenties Collection porcelain tile. The highly graphic pattern, inspired by encaustic tiles, also brings back a bit of that historical character her client was looking for.

“The pattern craze is relatively new here, but patterns have been around for ages in other parts of the world,” Zaveloff notes. “However, we did want to stay away from anything too trendy.”

“The floor is so dramatic and iconic,” she continues. “It’s a total show stopper. The range and hood are stunning, but when combined with the floor, it’s really sophisticated. It shows how far black, white, dark navy and cream can take a space. It combines a bit of modern farmhouse feel with charming country bungalow…without being too feminine.”

Zaveloff also loves how the floor mixes with the ceiling, which is comprised of relatively economical shiplap and faux cedar beams finished with an exterior deck stain that gives it an aged look. Vaulting it gives the room additional height.

“I really wanted something special for the fifth wall,” she says in reference to the ceiling. “Between the floor and ceiling there’s a lot of drama for such a small space. Even with a small kitchen you can make big, dramatic statements.”

Another budget saving item is the 3″x6″ Lancaster tile that sheaths the walls.

“It looks handmade,” she says. “When it comes to authenticity, I’m pretty particular, and this tile is a really good reproduction. It has nice reflectivity, irregularities and waves…without being too faux.”

Using it to cover the walls helps make the space feel larger by bringing the eye up. It makes for easy clean up as well.

Since the tile is white, the upper cabinets also seamlessly blend in, making them almost disappear. Adding glass to those that flank the window furthers their lightness.

“Because this kitchen is small, mixing white wall cabinets with dark bases – in this case dark navy Inkwell from Sherwin Williams – doesn’t look choppy,” she states. “In a bigger space, mixing cabinetry sometimes doesn’t work as well because it can seem like the homeowner couldn’t make a decision. But since everything on the walls in this kitchen is white, you almost don’t notice the wall cabinets. There isn’t any ‘fighting’ and everything from the counter up is light and airy.” 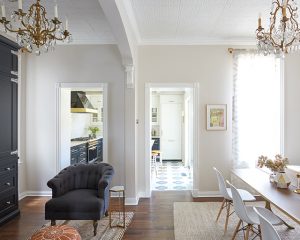 One of the sacrificed expenses was to remove the wall between the kitchen and dining room. However, during demolition Rebekah Zaveloff discovered a window that had been closed up within the wall. Turning it into a doorway created two entrances into the kitchen, allowing a bit more light to flow in.

Including a hutch-style cabinet to the left of the range eliminates a single floating cabinet that Zaveloff indicates can look lost on its own.

“You don’t always need miles and miles of counter space if you offer plenty of it in places of use,” she stresses.

Zaveloff also likes to mix cabinetry construction and design styles. In this kitchen, which features Greenfield Cabinetry, the upper cabinets are inset with visual hinges while the bases are frameless with concealed hinges. Antique Brass hardware matches the pendants that hover above the island, sconces that flank the ventilation hood and multiple faucets that accent the apron sink.

Cognizant of the kitchen’s petite footprint, Zaveloff included a peninsula rather than an island, sandwiching it between the two entrances so as not to impede flow.

“Getting everything to fit and still keep the room airy was a challenge,” she comments. “I think the peninsula helps the room read larger than it actually is. If we had included an island, you would notice how small the kitchen really is because you would need to maintain circulation around it. Plus, an island sometimes hides the range, which in her kitchen is a feature item.”

The designer also suggested a GE Advantium oven in place of a second oven because it combines multiple functions into one, thereby eliminating several additional appliances, including a microwave. ▪