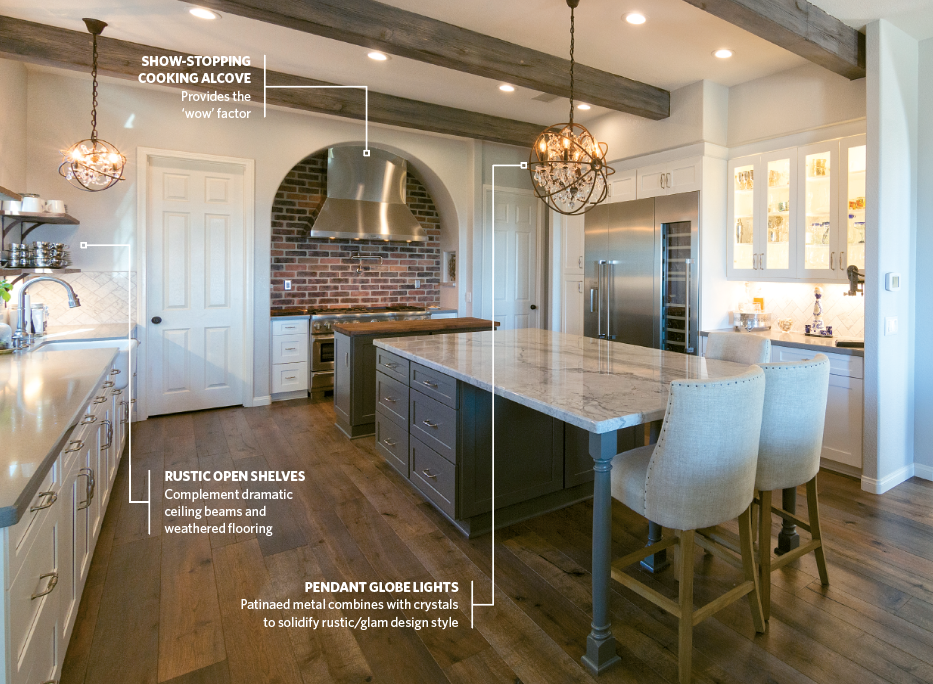 SAN MARCOS, CA – When this couple approached designers at Home Remodeling Center in San Marcos, CA, to transform their kitchen, they wanted their new space to reflect a combination of California glam with bursts of rustic charm in a transitional style that would blend the best of traditional details mixed with trending colors and finishes of today. Blending the distinctive design styles seemed appropriate given their own personalities, notes designer Barbara Preston.

“This family is charismatic…glittery, yet down to earth and full of positive energy,” says the designer, who worked with her clients to select materials and finishes while co-designer, Nora Bloomfield, CKD, focused on space planning and cabinet layout. “Rustic touches allow the kitchen to be a true workhorse, without the fear of dents and nicks, while the glamorous elements shine in a kitchen that is both beautiful and useful.”

Open shelves made from reclaimed barn wood – a 100-plus-year-old ‘find’ diligently researched and selected by the homeowner – replace upper cabinets along the outside perimeter of the kitchen for an open, contemporary look that also supports the rustic vibe. Although a relatively short four feet in length, each 50-lb. shelf is supported by hand-forged iron brackets that are securely bolted to the wall. This rustic combination of wood and iron complements dramatic ceiling beams and also ties in with the wide LM Flooring weathered/distressed oak planks that provide a hand-scraped look.

Additional rustic touches include a Rohl Fireclay farm sink, accented with an industrial-style Kohler faucet with pull-down spout that gives a nod to the rustic side as well. “She entertains a lot and is always cooking for guests,” Preston says. “A large, open sink – rather than one that is divided into two sections – can accommodate the big pots she uses. Plus, she just fell in love with the look of a farm sink.”

Opaque gray Qortstone Steel quartz countertops around the kitchen’s perimeter provide a scratch- and heat-resistant surface that can withstand the rigors of food prep. “Quartz also won’t stain, so we wanted to use it for the counters that get the most use,” she adds.

As a complement, Preston incorporated Super White Quartzite on the large ‘eating/entertainment’ island. It serves as a glamorous element while offering a lot of visual movement. “Quartzite is beautiful, but it takes a bit more maintenance,” she notes. “It needs to be sealed and isn’t quite the workhorse of quartz so we used it on the eating/entertaining island. It’s the ‘beauty’ while quartz is the ‘beast.’”

Dark walnut butcher block on the small island fulfills the client’s desire to include wood. “She really likes the richness of wood, and it was important to her that it be included in the design,” says the designer.

All three surfacing materials sit atop Shaker white and charcoal gray cabinets from Envoy Cabinetry. “Mixing the color of the cabinets plays into the overall yin-yang balance of the design…glam versus rustic, light versus dark,” she says. “We also wanted to incorporate some of the trends seen on shows where designers, such as Chip and Joanna Gaines, are using a lot of white and gray. We didn’t want to go quite as rustic, so we chose glossy finishes while staying with trending colors. It’s a bold design move that helps create an unforgettable kitchen for this jet-setting couple who travel the world, but who also want a comfortable nest to come home to.”

Striking pendant globe lights hover above the sink and large island, providing a complementary mix of rustic and glam. A third sphere located in the living room melds together the two rooms, which flow into each other. “Solidifying the rustic/glam styles, the spheres are made from patinaed metal with dripping crystals inside,” notes Preston.

Furthering the ‘glam’ look, illuminated glass cabinet doors showcase a display of bar supplies used for entertaining. Undercabinet task lighting highlights Bianco Gioia marble laid in a herringbone pattern that serves as the backsplash. Preston repeated the marble on the sink side of the kitchen. Since the living room is connected to the kitchen, she also used it as a fireplace surround to tie the rooms together, using a herringbone pattern for the hearth.

While rustic and glamorous elements provide the foundation for the kitchen, attention to details – such as the quartz-lined niches to each side of the range for oils and magnetic spice jars, as well as the show-stopping cooking niche – further enhances the space.

“This project is a head turner from the moment you step in the door,” she says. “Rounding the corner, visitors come head on to a major ‘wow’ factor…the range nestled in an arched alcove and accented with recycled brick becomes the main focal point.”

The brick was chosen to tie in with a similar brick that was used in the office nearby. “As you come in the front door, you walk by the office and into the kitchen,” she says. “The brick used in this room provides reference to the brick backsplash.”

The designer’s clients selected the Thermador appliances – including the dual-fuel range with steam oven, 180-bottle wine cooler column, freezer and refrigerator columns, vent hood and dishwasher – to support their love of cooking and entertaining.

“We took into consideration the types of pots and pans she uses and adapted the design accordingly,” Preston mentions. “We chose mostly drawers in the islands to give full access so she can easily see and access everything stored within them.”

The two-island design also gives her client the ability to cook without guests crowding her. A pass-through between them keeps them separate but connected. “She has one space near the oven, while the long island with barstools nearer the living room keeps guests within talking range but out of the bustling cooking area,” she explains. “Wine and margarita glasses are conveniently located in the glass-front cabinets nearby for easy access.”

Part of the renovation also included a new laundry room, which was actually downsized from the original footprint to create a larger kitchen.

“We knocked down some walls to make better use of some wasted space in the existing laundry room, reconfiguring both footprints to expand the kitchen,” she says. “That meant we had to create more storage in the laundry room to make it more useful.”

As such, the designer added a slim cabinet between the washer and dryer, repeating the same materials from the kitchen, including the charcoal gray cabinets and gray quartz countertops. A pantry-style cabinet was also added to the opposite wall, while a second one was placed between the laundry room and kitchen to serve as overflow storage for both spaces.