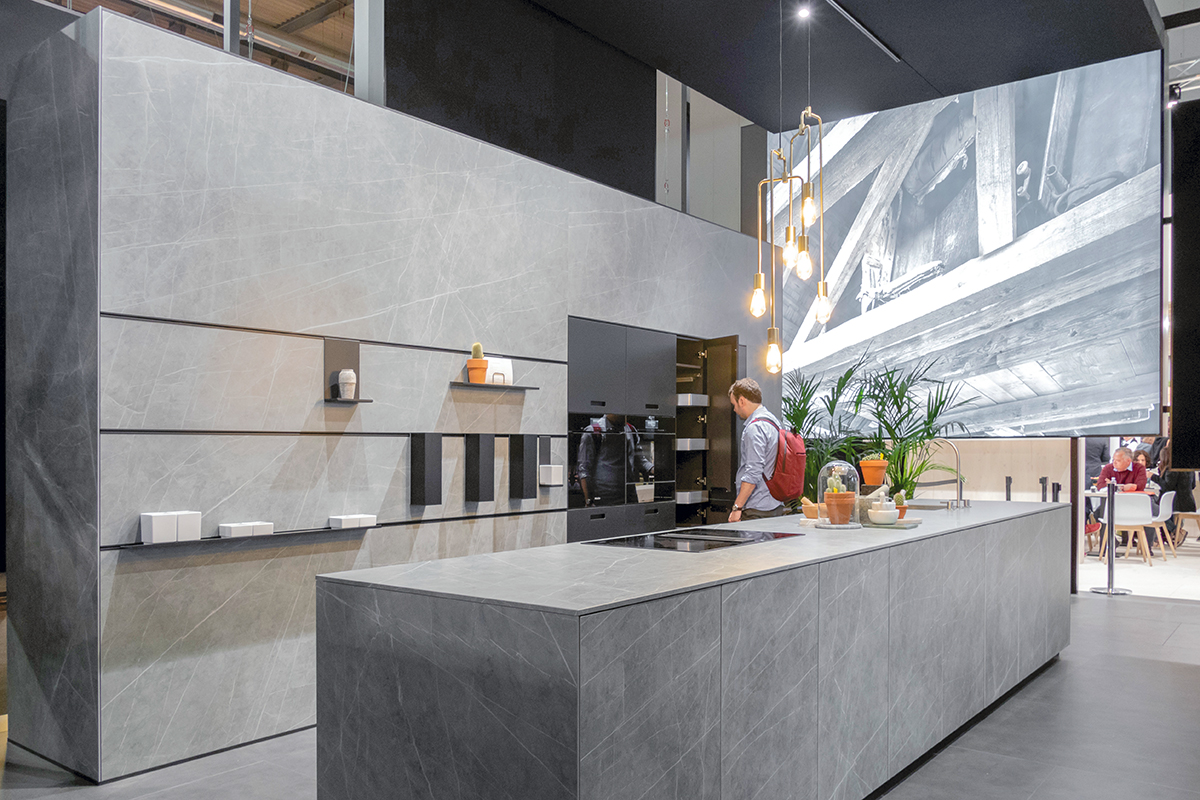 Stone was prominent at EuroCucina, as displayed in the Schüller booth, including on counters, backsplashes, walls and cabinet facing. Photo courtesy Salone del Mobile.Milano.

Fashion and design are key to Milan’s infrastructure, so when designers and manufacturers of all things for the home visit each spring, they are often invigorated with a renewed creative spirit. This spring, the 57th edition of Salone del Mobile.Milano 2018 delivered on this promise, showcasing the latest trends and fashion for home design.

Salone, held April 17-22 at Fiera Milano, Rho, welcomed a staggering 434,000+ attendees who reviewed displays from over 1,800 exhibitors over more than 2.2 million square feet of space. Included this year, and on a biennial basis, was EuroCucina and its collateral event FTK (Technology For the Kitchen), as well as the International Bathroom Exhibition.

At EuroCucina, today’s kitchen was depicted as a social, welcoming space, with materials, textures and design working together to emit a relaxed yet contemporary vibe.

“The popularity of the open-concept kitchen space was very apparent as a driving force behind one of the more pervasive trends,” notes Lauren Levant, principal and creative director of Lauren Levant Interior, in Pittsburgh, PA. “A ‘now you see it, now you don’t’ adaptable space strategy was a common thread in the development of product design across many categories,” Levant states. “Multi-function work tops, cooktops and sink tops were on display to offer ways to perform a myriad of tasks, and then to smartly adapt the space to another function, or even to conceal the functions altogether, when the needs of the space changed.”

For example, she reports, there were moving countertops that could cover the sink and cooking equipment at a moment’s notice. “We also saw advancement in the technology of induction cooking that will be concealed and/or fully integrated into countertop surfaces.”

“There were several automated cabinet features, such as countertops that moved effortlessly to expose cooking spaces and allow for island seating with physics-defying overhangs, and pocket doors that slid in and out on their own,” adds Cassia Wyner, principal, CW Design, LLC in Brookline, MA.

“What really caught my eye is what I would call the ‘hidden kitchen’ – the idea of integrating the kitchen and living area in a very organic manner, through the illusion of flat surfaces with depressed cooktops, sinks, faucets, etc., with kitchen islands, made of wood or stone, allowing for a seamless flow into the next space,” adds Sandra Diaz-Velasco, R.A., owner, Eolo A&I Design in Miami, FL.

Much of the story at EuroCucina and FTK was about surfaces. Materials, thicknesses and applications had visitors stopping, touching and taking notes.

Stone and porcelain were the main materials on display, followed by sintered stone, brushed metals, woods, glass and even laminate. Intricate edge details on countertops, matching slab backsplashes and patterns with dramatic movement were prevalent.

“A big new trend in Milan was the introduction of very heavily patterned counter surfaces, such as marbles and granites with active movement or enhanced with metallic stripping. For years, all counters at the fair seemed to be white or stainless,” states Ellen Cheever, CMKBD, ASID, CAPS, principal, Ellen Cheever & Associates in Wilmington, DE.

“I was impressed with the patterns recently launched by SapienStone, a through-body porcelain slab product now available in the U.S. It can be applied to both countertop and wall or floor surfaces thanks to the availability of thinner- and thicker-gauge slab dimensions,” reports Levant.

The expanding range of thicknesses are indeed having an impact on how surfaces are being used in the kitchen beyond countertops to backsplashes, island facing and more. “They were showing a lot of different thicknesses in countertops integrated into one kitchen,” offers Fisher. “It looked amazing.”

“A trend carrying over from EuroCucina 2016 was surfacing materials that are meticulously interconnected to one another – nothing just sits on top of another material,” notes Cheever. “This attention to detailing is so beautiful and adds such great sophistication to a contemporary room setting.”

She continues, “While thin countertops cascading to the floor have been a key part of the fair for about six years, this year thin materials [with no visible means of support] were seen in many settings interpreted as open shelf systems or as airy space dividers.”

Additionally, an expanding trend from the previous EuroCucina was the sense of gathering around a “table,” adds Cheever. “This is achieved by re-imagining a cantilevered countertop extension beyond an island end to allow people to sit opposite each other, rather than next to each other at a back-of-the-island extended counter so often seen in the U.S.”

“The most interesting new trend that caught my eye in the kitchen can be summed up by the word ‘texture,’” says Wyner. “On cabinet doors we saw stone veneers, rough-hewned wood, new metal treatments (brushed, patina) and dark, smoked glass with interior lighting. The interiors of cabinets were not neglected, and featured automated lighting and contrasting wood or even painted color finishes.”

Cheever agrees. “One of the newest and biggest trends at the fair was the use of porcelain and stone as cabinet fronts.”

Glass front and open shelving were also on display, though with a purpose.

And, because the shelving is being used to showcase collectibles and beautiful serving pieces, integrated lighting was carefully placed to add drama.

“LED technologies have advanced to the point that they are now able to be incorporated in increasingly elegant details,” emphasizes Levant.

The cabinets on display went beyond beautiful, however, providing optimal functionality. “All of the cabinets had thought-out storage,” stresses Fisher, who cites the importance of this element. “I believe many designers leave a lot of money on the table by not thinking storage out fully,” she says.

One of the newest places shown for storage was the backsplash – and not just magnetic strips and hooks on the surface. Instead, visitors were treated to a range of sliding doors and pop-out panels in the backsplash that were hiding spices and utensils out of sight.

“I think the concept of re-thinking the back-space area as a new site for a storage system or a much more interesting material is a great ‘take-away’ for U.S. designers,” notes Cheever.

While tones of black – from charcoal grey to onyx – graced much of the cabinetry, the darkness was permeated by pale wood tones and bursts of bright colors.

“There were pink cabinets and blue cabinets, and they used a lot of color in combination with black cabinets,” reports Fisher. “The trend is definitely getting away from doing a monochromatic kitchen.”

“Gray seems to have been replaced with black and brown on cabinetry,” confirms Wyner. “And, on the other extreme, more color is being introduced on appliances.”

Dolce & Gabbana designs for Smeg turned appliances into works of art, while Bosch offered colorful refrigerator door panels that could be changed out for the indecisive client.

Striking colors were also used in combination – cabinets with bold hardware, appliances in bold high-gloss colors and burnished finishes of pewter, copper and gold. There were colored cooktops and textured wall ovens in addition to colored cooking appliances with metal accents in mixed materials.

Whether appliances went into hiding behind panels or took a colorful spot at the center of the design, one thing they all seemed to have in common was their high-tech abilities.

Gas burners resting on surfacing was something seen repeatedly from booth to booth. Fisher favors the idea as one that makes sense for many kitchens. “It would be nice to separate the cooking areas – to have two burners in one area, then two burners in another space,” she comments.

Range hoods also made quite the statement at EuroCucina, and didn’t necessarily resemble vents of years past.

In this display from Ernestomeda, the wood cutting board can slide, becoming a countertop as it conceals the cooktop. Shelving also disappears into the countertop when not in use. Photo courtesy of Salone del Mobile.Milano

“I love the new hood ideas that resemble a pendant light on recirculating hoods,” exclaims Diaz-Velasco.

Turning to the bath, predictable trends such as saving water, antimicrobial surfaces and geometric shapes all took on new meaning at the International Bathroom Exhibition. Smart showerheads not only mimic natural rainfall, but do it using less water. Glazes on fixtures incorporate antimicrobial properties and provide a non-stick surface that makes cleaning easier. Innovative solid surface materials also enable manufacturers to stretch the limits of design.

One of the most talked about elements was the Wet System wallpaper for the shower from Wall&Déco. The wallpaper is designed for damp environments, so it can be used in the shower and even on the exterior of the house.

“Wallpaper in the shower opens up a whole new design area,” says Fisher.

“Wallpaper throughout the entire shower and on the floors!” adds Diaz-Velasco. “I totally dig this concept and am trying to convince clients to incorporate this.”

While most of the trends seen at Salone were contemporary and European in scope, designers note that many ideas can be incorporated into American homes.

“Many of the trends are universal in their appropriateness for contemporary settings, so they can be employed when creating a U.S. kitchen,” remarks Cheever. “To me, there is no longer a ‘line of difference’ between U.S. kitchens and those seen in other parts of the world from a style standpoint.”

“Regarding what trends can be transferred to the U.S., it’s really up to the designer to sell the concept,” stresses Fisher. “It’s up to us to get clients to try something new.”▪