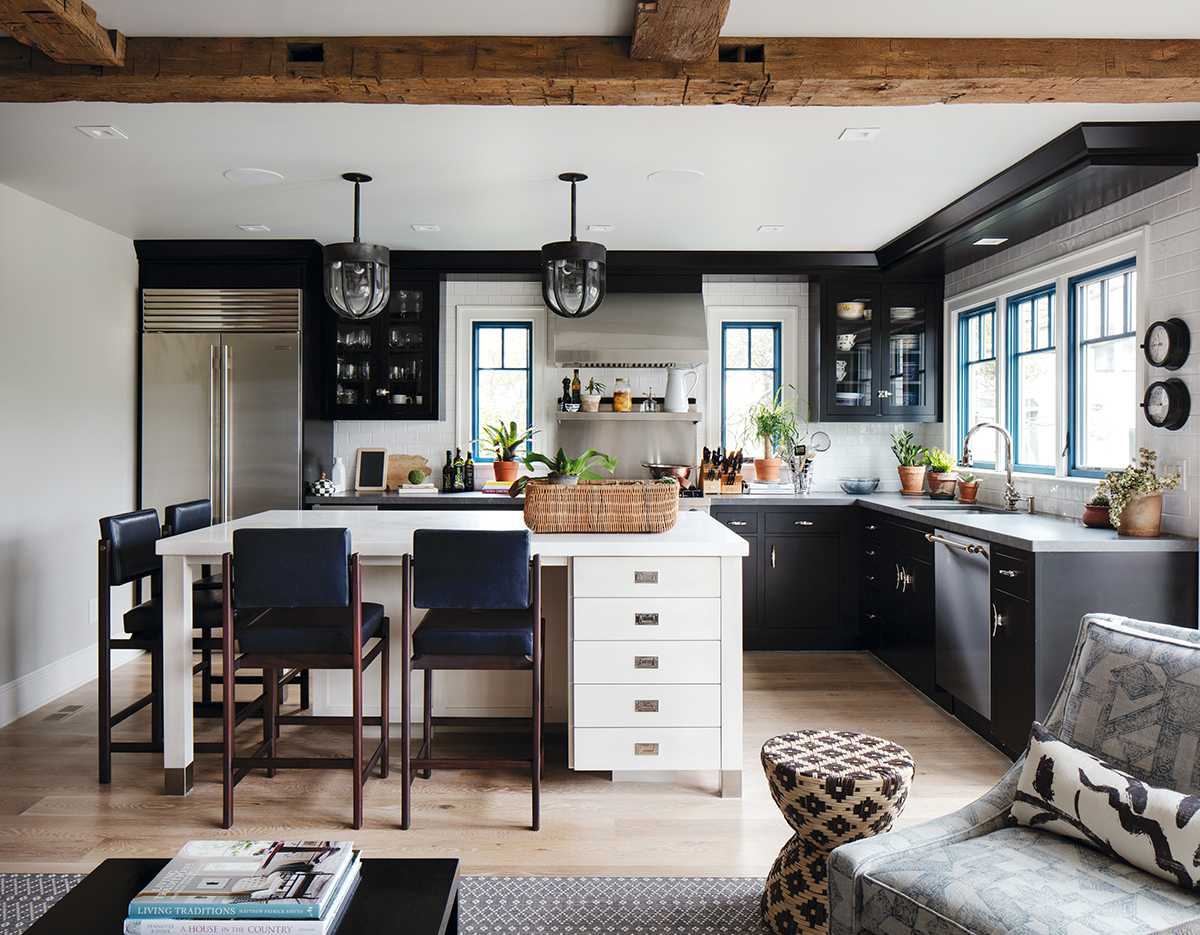 Rowayton, CT ­— Karen Berkemeyer and Leslie Dunn often work together to create their clients’ dream kitchens and baths, with the former focusing on kitchen/bath design skills and the latter incorporating interior design touches for their respective companies of Karen Berkemeyer Home in Westport, CT, and Dunn Designs in Norwalk, CT. This kitchen, along with the master bath and a guest bath, was no exception…however, this time the resultant collaboration was showcased in Dunn’s personal residence.

“We work really well together,” says Berkemeyer, noting a mutual respect for each other’s talents, which makes for great collaborations. “As a kitchen and bath designer, I focus on making sure these spaces technically and functionally work correctly. Partnering with another professional, such as an interior designer, gives clients the best of two worlds since multiple people are working on the same project. I love working with Leslie because she is so creative and has great taste. She is especially talented and creative with paint.”

In addition to the black cabinetry, dark-hued accents include deep blue paint that adorns the window trim.

Paint, at opposite ends of the color spectrum, is a focus of Dunn’s kitchen, where the bright white island is contrasted with dark black perimeter cabinets.

“The use of color – combined with very simple cabinet door styles, which are a great choice for today’s kitchens – makes this design stand out,” says Berkemeyer.

Black perimeter cabinets served as the starting point for color. “She really wanted to do black cabinets,” Berkemeyer indicates.

As a contrast, the island was designed to look like a table that Dunn found, notes the designer. “Island and perimeter cabinets don’t necessarily have to match in cabinet style or color,” she says. “In fact, when done well, like in this kitchen, having them not match shows a lot of creativity and makes for an interesting design.”

Keeping cabinet styles simple is the key to making a ‘mismatch’ work, says the designer in reference to the flat-panel, flush-inset Wood-Mode perimeter cabinets and full-overlay, shallow-cut, Shaker-style Signature Custom Cabinetry cabinets on the island. Both are sheathed with custom colors selected by Dunn.

“You would never do this perimeter with oak raised-panel doors on the island,” she says. “This perimeter features a very simple door style, as does the island. They play off of each other well. This entire kitchen has created so much interest from people. They see things they would have never thought of doing…and they like the result.”

Berkemeyer added custom brushed steel accents at each leg base for the island to add texture and make the island more interesting.

The designers also kept the cabinet hardware unpretentious. Pulls on the perimeter cabinets bring to mind cleats used to anchor boats to a dock, giving the space a bit of a nautical vibe that pays homage to the water just beyond the kitchen windows. For the island, they incorporated drawer pulls that resemble those found on a filing cabinet. Berkemeyer also designed the island with seating for four, positioning stools at a right angle to facilitate conversation between guests. The designer also added custom brushed steel accents at each leg base.

“They add another texture to the space and make the island more interesting,” she says.

To continue the contrast between light and dark, Berkemeyer topped the island with white marble, which she built up with a 2″ mitered edge. The perimeter features median-black, charcoal-colored quartz with a leathered finish for added texture.

White 3″x6″ subway tile covers the walls, extending from the countertop to the windows and beyond. Its undulated surface offers a rippled appearance while its stark light color juxtaposes against the blackness of the shallow-depth soffit on the ceiling.

“I thought the kitchen stopped too abruptly in the corner,” notes Berkemeyer in reference to the soffit. “I suggested that we add the soffit, extending it to the refrigerator on one wall and across the length of the windows on the other. It really helps pull the whole kitchen together.”

Additional dark-hued accents include the deep blue paint that adorns the window trim. “She really likes to include the unexpected!” she says.

To make better use of the kitchen’s footprint and gain a few extra feet of space, the designers removed walls between the living room and kitchen, eliminating a hallway in the process. To provide visual differentiation between the two spaces without adding a physical barrier, they added reclaimed antique beams in the ceiling, extending them into the living room.

“Previously, her home had an enclosed little kitchen with separate living room,” says Berkemeyer. “Now, the kitchen is more open and looks so much larger. Taking down the wall also made it possible to include the island.”

Even with the additional space gained by removing the hall, storage was a challenge for the relatively petite kitchen. “When spaces are smaller, like in this kitchen, the biggest design challenge is usually storage,” she says. “It’s important to make the most of whatever space you have, and to make everything accessible, especially focusing on corners. Taking cabinets up to the ceiling maximizes the space. It’s important, too, to pay attention to clearances, ensuring that walkways are technically correct and easy to maneuver.”

Glass panels in the wall cabinets provide a brief glimpse of their contents and keep the space visually ‘light.’ “Like the rest of the kitchen, the glass is kept clean, without any mullions, to maintain the desired look for the space,” she concludes. ▪