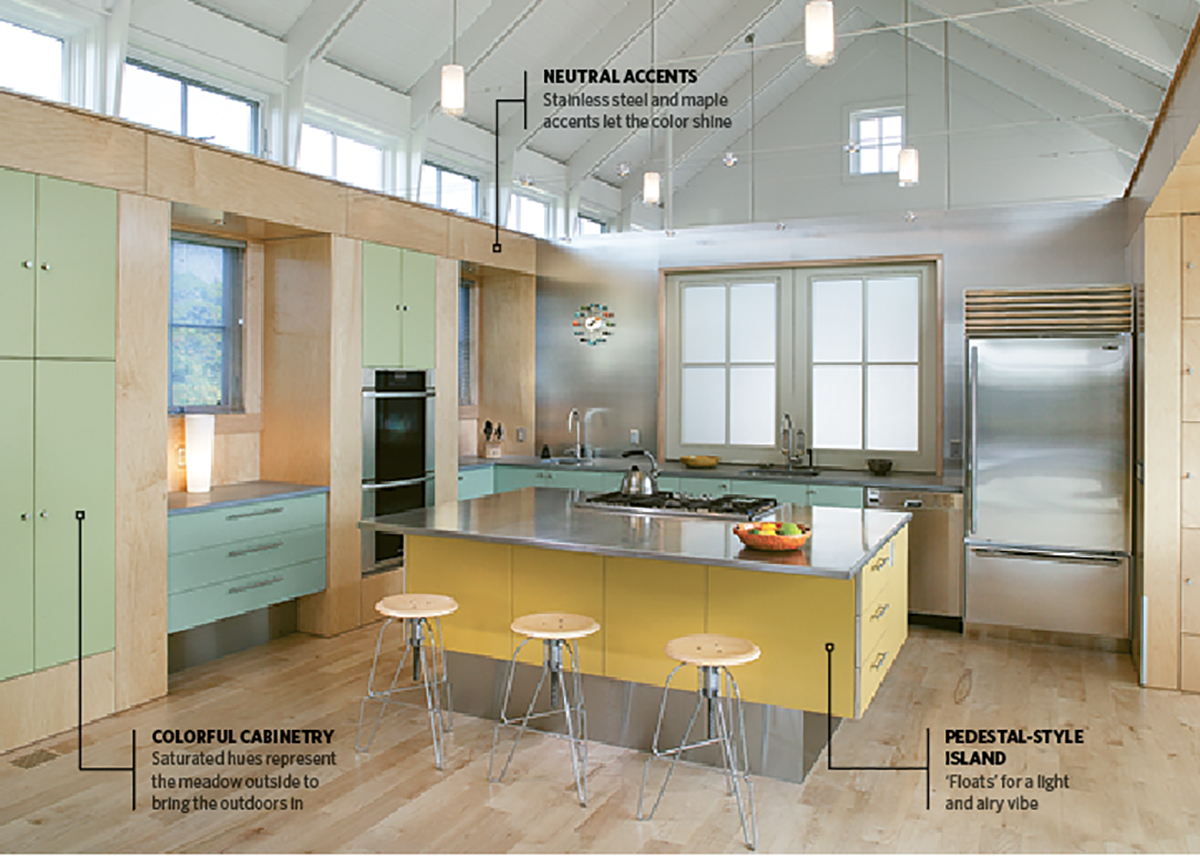 MARTHA’S VINEYARD, MA — When finding inspiration for projects, designers often reference a client’s desire to bring the outdoors in. They frequently accomplish that goal by creating textures that emulate nature such as trees, grasses and flowers, or by showcasing the exterior view through a window. However, in this kitchen, it’s all about bringing the outdoors in with the use of color.

Located in a meadow on Martha’s Vineyard, the home features an interior that draws on a color palette of blues, greens and yellows – with pops of reds – found in the landscape that encompasses the house.

“We drew on the colorscape of the surrounding meadow,” says Christine Ingraham, designer, Fletcher Cameron Kitchens, in New Haven, CT. “When we considered the palette, we went outside and picked a bouquet of colors in the spring and fall…focusing on the greens and blues of spring, and oranges and burgundies of fall. We wanted to bring the outside in, on a year-round basis.”

Ingraham worked with fellow design team member Gregory Spiggle to develop interior design elements – including cabinetry and furniture for the entire house – and finishes that coordinated with the home’s design created by Hutker Architects.

“We collaborated with a very sophisticated architectural firm that has a keen eye for detail,” says Ingraham. “We worked closely with them to make sure we complemented each other while keeping the spaces light and airy…reflective of the meadow, as well as the casual nature of living on Martha’s Vineyard.

“We also worked closely with very artistic clients who knew something about design and aesthetics,” she continues. “Not only did we have to make it functional, but we were also acutely aware of the design aesthetic. Working with Hutker Architects also provided us with great support and additional design input.”

The color palette for the kitchen, as well as the adjoining dining and living rooms, is omnipresent of the meadow, represented by laminates from Abet Laminati in blue, green and yellow hues with accents of burnt red in the attached dining area. “Laminate is a great material to work with,” she notes. “It is very durable, and washable. But the colors were what we were really looking for. From day one, it was all about color, and Abet Laminati offers the most unique and gorgeous color selections.”

To further enhance the cabinetry and to provide an elegant and sophisticated element, Fletcher Cameron mounted the laminate on a multi-ply core with exposed edges. “We needed to keep the element of sophistication at a high level…not just for our clients, but for the interior spatial characteristics,” Ingraham offers.

To complement the colorful cabinetry, Ingraham added natural maple and stainless steel elements. Maple is represented in the flooring as well as the thick wood ‘columns’ that frame the cabinetry and niches throughout the space.

“The exterior of the shingle-style house is a mix of modern and traditional features, with beautiful gray tones that fit beautifully on Martha’s Vineyard,” says Ingraham. “But we wanted to make sure the inside evoked a very contemporary, modern feel. Maple certainly provides that with its light richness. For years, maple has been equated with Swedish and Scandinavian design and, in this home, it doesn’t compete with the color. We do a lot of kitchens with other wood species and color, such as walnut and teak. But to get the lighter, blonde feel we wanted, maple was the perfect choice.”

Stainless steel offers another relatively neutral element to offset the colorful cabinetry. Ingraham added it to the island top to provide a durable work surface for cooking and food prep. She also incorporated it into the toe kicks of the perimeter cabinetry and the island, and also as a backsplash for the sink/refrigerator wall.

“Stainless is another great material,” says the designer. “Some clients may hesitate because it can scratch and show fingerprints, which it does. But it’s impervious to anything, and it’s sterile and very easy to clean. It will last for years…getting better, and more beautiful, with time.”

Stainless steel is also well represented in the appliances, including the Miele cooktop, dishwasher and ovens as well as the Sub-Zero refrigerator. The designer chose to emphasize their facades, rather than conceal them behind matching cabinet panels. “Showcasing the stainless was intentional,” she notes. “We wanted to pick up on the other stainless features in the space, so we didn’t want to disguise the appliances. Instead, we wanted, for example, the refrigerator to look like a refrigerator…and ultimately the space to look like a kitchen.”

Ingraham combined the stainless accents with Pietra Cardosa limestone for perimeter countertops. “We do a lot of combination materials, not just on cabinet doors, but also on countertops,” she mentions. “We’ll often do one material on the island, with another on the perimeter…something that complements rather than competes.”

Because the space is so voluminous, Ingraham included a pedestal-style island with a 12″ toe kick and seating for three. “The kitchen is tied into the dining and living room, so it’s a large, open area,” she says. “We didn’t want a ‘weighty’ island that goes all the way to the floor, so we created a ‘floating’ island with a pedestal effect. We wanted something that was light and airy to fit the feel of the entire house.”

The room’s tall ceilings also created a challenge for lighting. Natural light flows into the space from multiple windows near the ceiling, which Ingraham accented with cove lighting to add beauty, especially at night. Additional light is provided by low-voltage cable lighting and well-placed pendants. “We needed task lighting as well as ambient lighting,” she concludes. “The cable lighting strung over the island is perfect for task lighting, bringing the light low enough to work by. It also provided a nice contrast to the pendants suspended throughout the rest of the space.” ▪