Continued Growth Seen in Cards for 2019 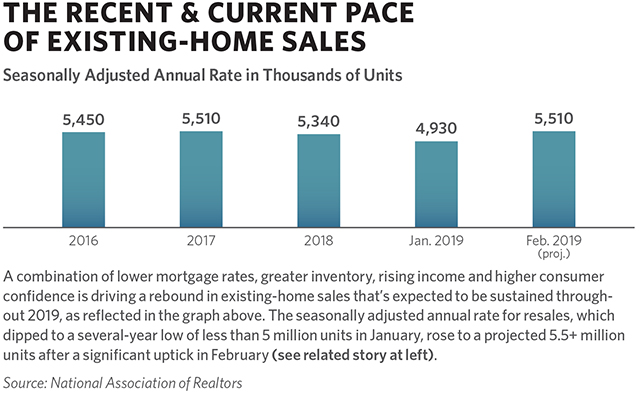 Job growth, rising household incomes, lower mortgage rates and higher consumer confidence are expected to fuel continued housing and remodeling growth into the future, according to the latest forecasts by market analysts. Among the key statistics and forecasts released in recent weeks by government agencies, research firms and industry-related trade associations are the following:

Home builders who can produce affordable housing will be able to meet sales demand being fueled by “healthy household formations [along with] solid job and wage growth,” according to Robert Dietz, chief economist for the National Association of Home Builders. The Washington, DC-based NAHB said last month that an early-year rebound in housing starts mirrors home-builder confidence, which declined in the latter part of 2018 but rebounded early this year. “Declines in mortgage rates brought buyers back into the market,” said NAHB Chairman Greg Ugalde. “After a challenging period last fall, builders expect a solid spring home buying season.” But despite the uptick in starts, “builders remain cautious” in light of single-family permit numbers that remain soft, NAHB officials noted.

A “powerful combination” of lower mortgage rates, greater inventory, rising income and higher consumer confidence is driving the latest rebound in existing-home sales, according to the National Association of Realtors, which reported that resales posted strong gains in February, experiencing the largest month-over-month gain since December 2015 (see related graph, above). While existing-home sales remain down from a year ago, moderating home prices combined with gains in household income are expected to boost housing affordability, luring more buyers to the market, according to Lawrence Yun, chief economist for the Washington, DC-based NAR. While recent mortgage-rate declines have had only a modest impact on 2019 sales thus far, the lower rates “will inevitably lead to more sales,” Yun said, adding that the market is still suffering from an inventory shortage, particularly on the lower end.

Sales of kitchen cabinets and vanities gained ground in 2018 over sales a year earlier, the Kitchen Cabinet Manufacturers Association said last month. According to the Reston, VA-based KCMA, manufacturers participating in the association’s monthly “Trend of Business” survey reported that 2018 sales of cabinets and vanities, after posting a 0.7% gain in December, were 2.0% above those of the previous year. Sales of stock cabinets gained 5.3% for the year, while custom cabinet sales were up 3.5%, the KCMA said. In contrast, semi-custom cabinet sales declined 5.7% in 2018 compared to the previous year, the KCMA added.