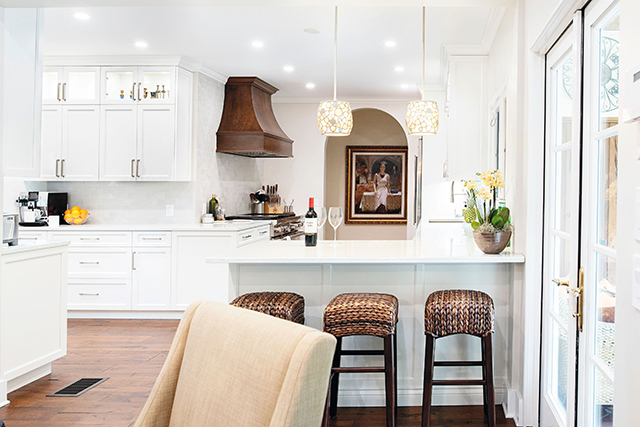 Designer Gloria Sollecito renovated the kitchen of this 100-year-old home in Boca Raton, FL with the objective to update and improve function while maintaining the historic flavor of the home – very much a fusion of technical and aesthetic know-how. Photo: Shanna Morgaine

It’s one of those questions that anyone even tangentially involved in any facet of the residential industry will have not only an answer to, but often very strong opinions about: what is the difference between an interior designer and a kitchen and bath designer? For some, the two professions are more or less one and the same; for others, to speak of them in the same breath is tantamount to blasphemy.

All the same, as the pandemic drags on and the demand for remodeling and redesigning services increases accordingly, kitchen and bath designers and interior designers will inevitably find themselves either collaborating on, competing for or coexisting on projects. This might necessitate a frank examination of where each profession’s lane is, so to speak, in order to head off potential collisions and client confusion. What defines each profession, really? Have those roles changed in recent years? Do they intersect? If so, where? 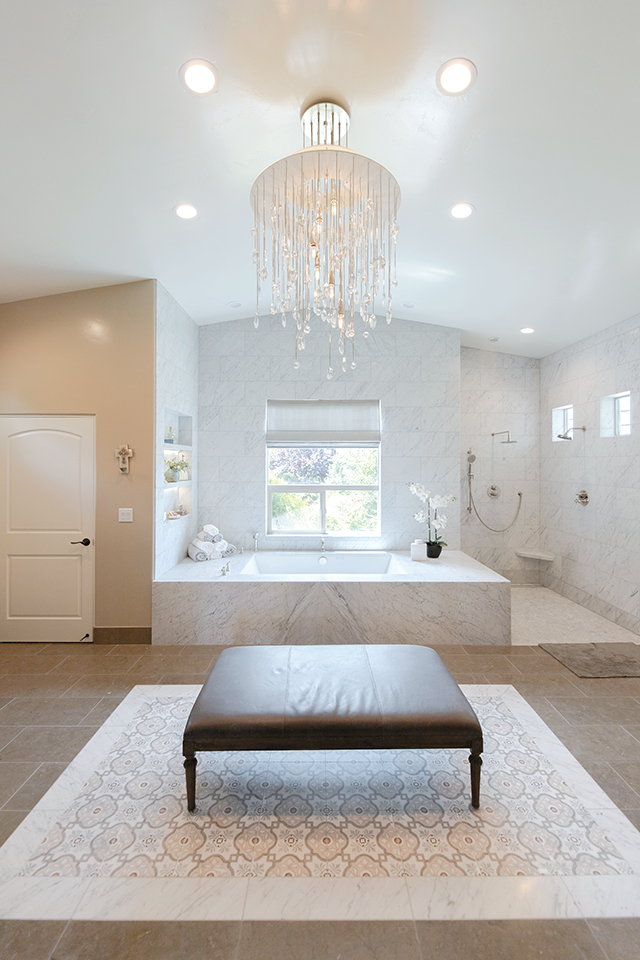 Ariana Lovato, AKBD, of Honeycomb Home Design, designed this bath as part of a full-home transformation of a builder spec house. It is common for interior designers to work not only in the kitchen and bath, but in the other rooms of the house.
Photo: Emily Elise Photography

Pinning down an exact definition of either profession is somewhat difficult, but there do seem to be some points industry professionals can agree on. Although the tendency might be, on the part of some designers and architects, to ascribe more skill and training to kitchen and bath designers and dismiss interior designers as mere selectors of soft goods and color palettes, according to designers interviewed by Kitchen & Bath Design News, it’s more accurate to look at kitchen and bath design as a specialty beneath the umbrella of interior design.

Ariana Lovato, AKBD, owner of Honeycomb Home Designs in Pismo Beach, CA, which advertises itself as an interior design firm, is more or less in agreement. “I would define interior designer as someone that is responsible for specifying anything on the interior of the home. Anything that you would see, and sometimes it’s even things that you don’t see, but it’s typically anything that you would see and touch, an interior designer will specify. A kitchen and bath designer is micro-focused in the kitchen and bathrooms. And so their responsibility is to make sure that the space is not only designed properly, but safely and to code, but also aesthetically pleasing and functional.”

Kitchen and bath designer Ebony Stephenson, CLIPP, CAPS, of Designs by Ebony in Newport News, VA, offers an elucidating comparison. “I define interior designer as being more broad-scope, more of an overall blanket of design, versus a kitchen and bath designer being a specialty. You know, there’s a primary care physician, and then you have your specialists who only work on specific body parts.” She adds that each profession has its own specialized knowledge and resources. “I can’t tell you where to buy the perfect couch, but I can tell you how many linear feet of storage you will have and how it will be accessible.” 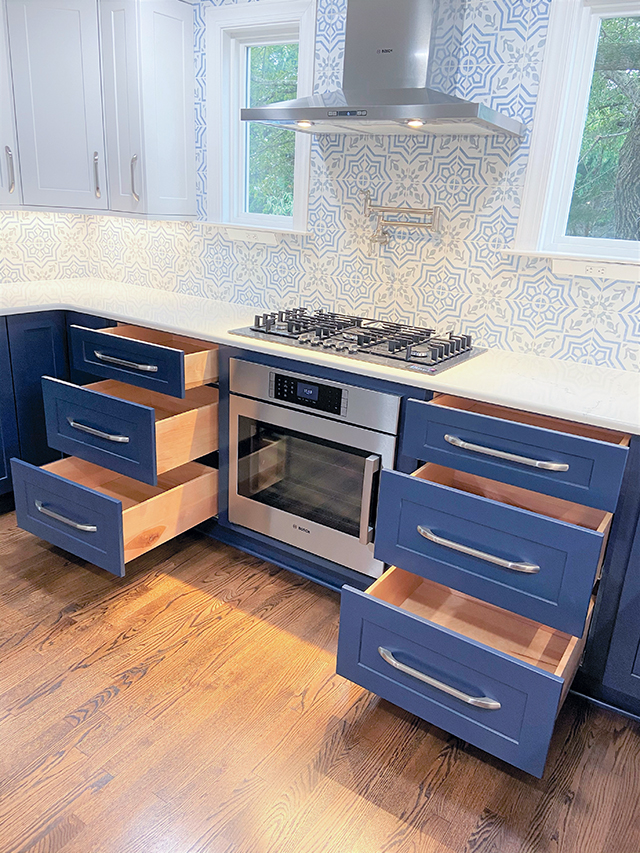 Ebony Stephenson, CLIPP, CAPS, who is solely a kitchen and bath designer, compares the relationship between kitchen
and bath design and interior design to that of a medical specialist and a general practitioner.

According to Davis Brown, it’s not only possible for kitchen and bath designers and interior designers to collaborate, but beneficial. While kitchen and bath designers have more technical know-how where those rooms are concerned, an interior designer’s role “is to keep the integrity of the aesthetics rolling throughout the whole project. So you kind of need both, in my opinion, for the best outcome. [The kitchen] needs the technical design and it needs to have the colors and the integrity of the design, the balance of textures and all those things that the interior designer brings to the table.”

“Typically for kitchen and bath designers, we know it’s going to take up to a month or more to get our cabinets, so we know to be patient, not to start jobs expecting things immediately,” Stephenson adds. “What I’m hearing right now from so many interior designers is they’re having to pivot more because they’re having their orders come in delayed because of COVID. So they’re learning patience right now.” She notes that interior designers may find themselves giving clients longer lead times and having to work to manage client expectations of the timeline in the way that a kitchen or bath designer might, in light of the pandemic. 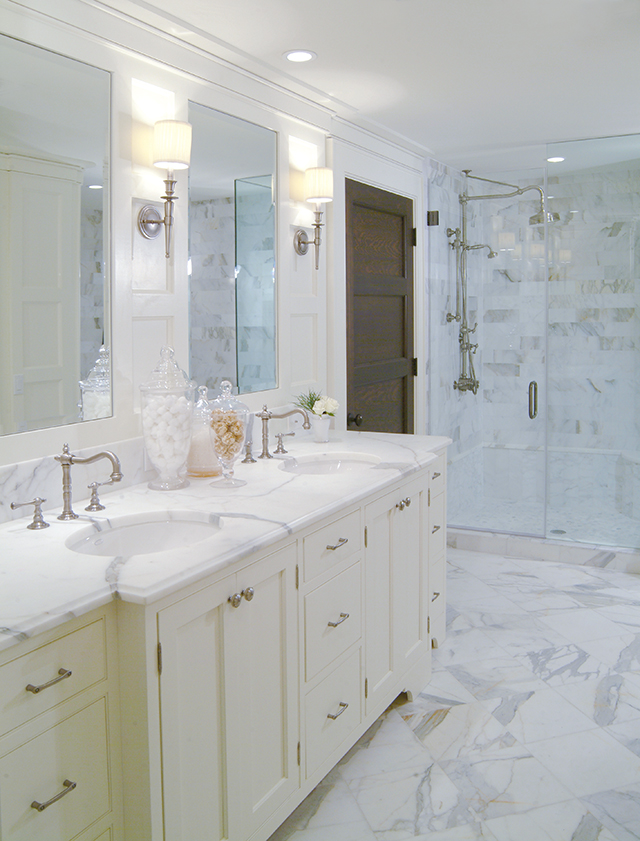 This bath remodel by Patricia Davis Brown, CMKBD, was part of a larger home remodel in an oceanfront townhouse development that necessitated a balance of technical and aesthetic know-how.
Photo: Rob Downey

Curated image-heavy social media such as Instagram and Pinterest seem to play a part in how kitchen and bath design is perceived in relation to interior design, and vice versa. Sollecito notes, “Kitchens are not separate but are a huge part of interior design. Open-plan kitchens, which continue to be popular, work best when they blend into and complement adjoining rooms. Countless images on social media illustrate kitchens that are artfully incorporated into the overall design of a home.”

For Davis Brown, who is both a master kitchen designer and an interior designer, “I use social to put my work out there as a professional designer, and its important that the end job looks like I’m telling a story on social media, which is super important for both interior designers and kitchen and bath designers. That type of thing is inspiring to people – you’ve got to have the finished projects looking great.”

Stephenson cautions that social media can contribute to a dilution in the ranks of truly skilled and certified designers, both interior design and kitchen and bath design, so it behooves both professions to educate clients as to the benefits of hiring a certified professional and not just a social media maven with flashy photography.

Lovato advises that collaboration with a good interior designer can draw more attention to kitchen and bath design on Instagram and Pinterest, in particular. “You see a lot of very stylized photo shoots of very stylized kitchens, and clients are noticing the barstools, the area rug, the lighting. Rarely will somebody really notice the way that the kitchen is laid out – unfortunately, they’re just looking at the aesthetics of it,” she says. “It’s kind of now showing how important it is to have a skillset for both, because we want to have a kitchen that’s functional and smart and all that, but you also want it to look good.” ▪