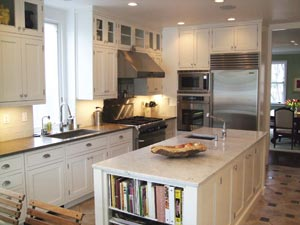 Washington, DC— From the moment she stepped into her new home, the owner of this bright, spacious kitchen knew she wanted a total teardown.

“Some clients take their direction from us, and others come in knowing precisely what’s wrong and how they want to see it fixed,” says Jeff Oring, CKBR of Bethesda, MD-based Case Design/Remodeling. “She had clippings from magazines to show us what she wanted, and we followed those directions pretty closely throughout the process.”

The couple had recently moved from England and immediately desired the renovations; Oring and designer Nicole Zeigler, CKBR were called in to plan a nearly whole-house remodel.

“We touched virtually every room in the house, save the basement,” says Oring.

Originally built in 1930 and extensively renovated in 1970, the kitchen hadn’t seen many changes since then. The original laminate cabinetry and countertops were worn, and the pantry doors were falling off. All of this was observed just during the designers’ first glance at the space.

“It was very contemporary, very sleek and white, lots of boxes and straight lines,” according to Oring. “The homeowners’ tastes ran to more of a traditional European sensibility, so our job was to take a contemporary design and completely rethink it.”

There was also the problem of an inefficient layout, thanks to an adjoining powder room. The flow of the room needed improvement before anything else could be done, so the decision was made to reorient the powder room to face a hallway on the other side to free up kitchen floor space.

“The powder room jutted into the kitchen, so we flipped it 90 degrees to run almost alongside the kitchen and hallway. This freed up about 14 square feet of additional kitchen floor space,” adds Oring.

Once that space was opened up, the new work triangle was patterned on the original design.

“We gave the homeowners many options as to where they could place their new appliances but, in the end, the old layout – in terms of proximity of refrigerator to cooking areas to sink, etc. – worked well and only needed a slight update,” he continues.

The 1970 renovation included a sizeable addition, so the decision was made to keep the room within its original footprint; the room was then stripped to the studs. New insulation created a “much warmer room,” per the clients’ wishes, and was helped by the removal of a wall-mounted air conditioning unit.

The original laminate-over-board cabinets were replaced with white Crystal Cabinet Works cabinetry. The upper cabinets on the perimeter walls as well as a custom hutch feature a number of doors with glass inserts, specifically requested by the client to create display spaces for artwork, and collections of cookbooks and stemware.

“We really updated the functionality in the cabinetry. Back when the kitchen was remodeled, inserts and pull-outs didn’t really exist,” says the designer.

The drawer and cabinet pulls, as well as the visible hinges on the doors, add a vaguely Arts-and-Crafts style to the room, which Oring now describes as evoking a modern French/European aesthetic. The cabinetry extends up to the 9’ ceiling, where it joins a sleek, minimal crown molding.

Light was also of concern to the clients. There is a large deck on the back of the home that the clients were concerned would obstruct natural light, and that the kitchen would be dark as a result. Period light fixtures were replaced by updated recessed cans. Undercabinet and in-cabinet xenon lamps add improved functionality and ease-of-use to the cabinet interiors.

The island originally had a white marble/wood combination top. “After 30 years of use, the white marble wasn’t so white anymore. There were spill rings in every color of the rainbow,” adds Oring.

White Carrara marble was specified for the approximately 8’5″x3’2″ island countertop, while Blue Lagos limestone is featured on the perimeter of the kitchen. Avid cooks, the clients required a sink in the island; the designers chose an undermount bar sink from Julien on the island, with a single-handle faucet and soap dispenser from KWC. An in-sink disposal unit from InSinkErator was included for easy clean-up during food preparation.

The main kitchen sink is also from Julien and features a Hansgrohe Swing faucet, and another InSinkErator in-sink disposal unit.

There is no room at the island for seating, so the kitchen sports a traditional dining table that the clients found in London and brought back from one of their trips.

In addition to their love of cooking, the clients are frequent entertainers. Accordingly, they wanted a suite of stainless steel professional-style appliances to suit their needs. Products specified include a 36″ Sub-Zero built-in refrigerator, a 36″ stainless steel Viking backsplash with two fold-down warming shelves, a 36″ professional hood from Thermador, a Miele dishwasher with hidden controls, and a suite of products from Dacor including a 36″ professional dual-fuel range, 36″ Island trim backguard for the range, 27″ double wall convection ovens from the company’s Epicure series, a 27″ microwave and a 27″ warming drawer.

Oring and Zeigler were also responsible for creating baths that would reflect the tastes of the clients and maintain a coherent design aesthetic for the home. The powder room just off the kitchen was given a beach-inspired style, and includes a Porcher Semplice vessel sink and Hansgrohe wall-mount faucet in polished chrome from the company’s Axor Citterio line, with decorative natural stone accents on the wall and floor.

The master bath reflects the kitchen’s European fusion sensibility with a liberal mix of materials. The design team chose a duo of Kohler Caxton vanity sinks paired with faucets from Harrington Brass with Palace Cross handles. The washstand is from Restoration Hardware.

A freestanding oval tub sits in the center of the room and has a filler from Rohl’s Perrin & Rowe line. Beyond that, at the back of the space, is a marble and mosaic tile walk-in shower.

The biggest plumbing challenge that the firm faced was the home’s original galvanized plumbing, which had to be converted to copper and PVC as work proceeded, according to Oring.

The designer notes one particular feature on the second floor was the creation from a spare bathroom of a laundry room.

“It’s really sensible when you think about it – the client can now do laundry on the same floor where that laundry is generally created,” he adds. A front-loading washer and dryer combination from Bosch sits in the space alongside a utility sink with adjacent counter space for folding.

Built in 1930, and remodeled in 1970, the home had a number of dated aspects – such as laminate cabinetry and countertops – that the new owners wanted to bring into the 21st century. White cabinetry from Crystal Cabinet Works fulfills the clients’ desire for a clean, sleek profile while a variety of inserts, pull-outs and roll-outs address their concerns about functional storage.

Functionality also led to the inclusion of an undermount bar sink from Julien on the island, with a single-handle faucet and soap dispenser from KWC. Both the bar sink and the main sink, also from Julien with a Hansgrohe Swing faucet, feature in-sink disposal units from InSinkErator.

The kitchen’s product line-up includes white Carrara marble on the island and honed LagosBlue limestone for the perimeter countertops; a stainless steel 36″ Sub-Zero built-in refrigerator, a 36″ stainless steel Viking backsplash with two fold-down warming shelves, a 36″ professional hood from Thermador, a Miele dishwasher with hidden controls, and a suite of products from Dacor including a 36″ professional dual-fuel range, 36″ Island trim backguard for the range, a 27″ single wall oven from the company’s Epicure series, a 27″ microwave and a 27″ warming drawer.

Handling a nearly whole-house remodel, the team was also responsible for creating a laundry room on the second floor with a front-loading washer and dryer from Bosch. The powder room, which was flipped as part of the renovation of the kitchen to add floor space, was given a beach-inspired style and includes a Porcher Semplice vessel sink and Hansgrohe wall-mount faucet in Polished Chrome from the company’s Axor Citterio line. In the master bath, the design team chose a duo of Kohler Caxton vanity sinks paired with faucets from Harrington Brass with the company’s Palace Cross handles, with a washstand from Restoration Hardware.