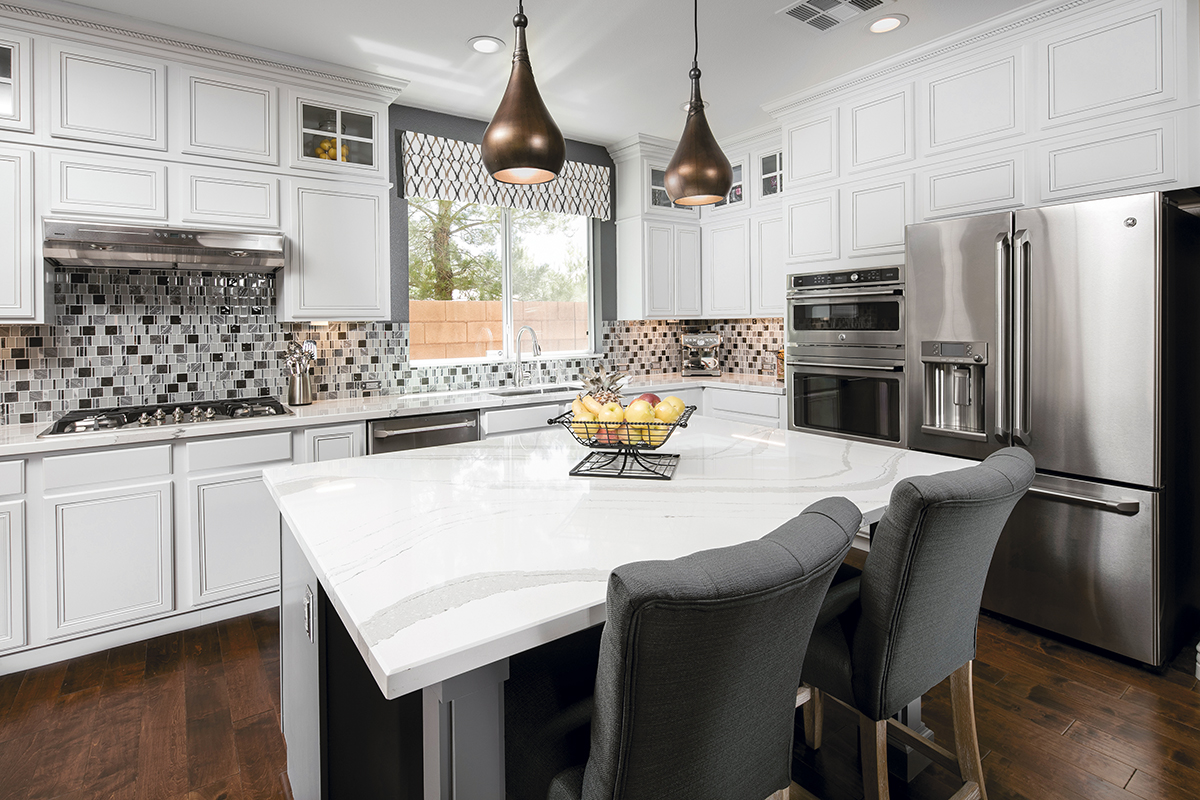 LAS VEGAS — It’s not often someone is able to pursue two passions and have each turn into a successful career – but for Jane Cunningham, that’s exactly what happened. The former musician now orchestrates the design of kitchens, baths and other rooms, inspired by the order and organization she loves in musical arrangements, as well as by the desert colors and bright lights and glamour of Las Vegas.

At the time that she met her husband some 35 years ago, Cunningham – co-owner of Las Vegas-based Room Resolutions – was the principal clarinetist in the Hawaii Symphony Orchestra (formerly the Honolulu Symphony Orchestra). She also taught music at the Punahou School in Honolulu.

Cunningham’s husband was in the Air Force, resulting in frequent relocations. From Hawaii, they went to Oklahoma, then to Virginia, then back to Hawaii, before they finally settled in Colorado. Each time they moved, it became more difficult for her to find work both playing and teaching music. It was during this period that she realized she also had a passion for creating a beautiful home for her family, regardless of where they were living.

“Every time we moved, I made sure that my family felt like it was our home almost immediately,” says Cunningham.

She continues: “I found myself going with all of our neighbors, shopping with friends and putting their homes together. I started thinking, ‘Wow, I could go to school for this, I could get paid for this, and I could actually fulfill another passion in my life.’”

MID-LIFE CHANGE
Family plays a big part in Cunningham’s life. Room Resolutions is co-owned by Cunningham and her daughter, Amanda, who also serves as design manager.

It was with the support of family that, in her mid-40s, Cunningham decided to make a career change and go back to school to get a degree in interior design. After finishing her  studies, she started her own design business in 2005: Room Resolutions.

By 2010, Cunningham’s husband had retired from the Air Force and gave her carte blanche to move wherever she wanted. Having had enough of the snow, Cunningham settled on Las Vegas, where she saw a lot of potential for design; the warm weather didn’t hurt either.

Describing how she transitioned from musician to designer, Cunningham talks about her love of creating harmonious environments, and how in both music and design, organization is the key: “Music is quite aptly organized, in order to produce a sought-after outcome, making it synonymous with the organization of architecture and design and the creation of a space.”

“We do a lot of kitchens and bathrooms – they’re the number one sellers for making your home better and helping your house sell,” she explains. “It’s the first thing that people feel okay with putting their money [toward]; they know there’s a return on their investment.”

Many of the kitchens and baths she designs are for affluent clients around the world, often in second homes. However, she is also seeing numerous requests for Universal Design.

Cunningham notes that one trend she’s seeing is a growing number of requests to redo tub/shower combinations, making them into curbless showers, which have become quite popular. Additionally, she’s getting requests for more dual master suites from clients who have parents coming to live with them; these allow everyone to have their own privacy, as well as access to a luxurious bath.

COLORED BY HER SURROUNDINGS
Cunningham’s designs are inspired by her surroundings. While living in Colorado, her designs were influenced by the Rocky Mountains and the vegetation. Now in Las Vegas, she finds that she is inspired by Red Rock Canyon, a national conservation area near her home and the desert.

“Everybody comes to Vegas to see the lights and all of the shows and magic that’s in Las Vegas, yet the true magic is nature – and that’s right here in Red Rock,” she states. “The desert surround paired with red-hued colors of carved rocks adds to the distinctive palette of nature when designing in Las Vegas.”

DESIGN ISN’T ABOUT ME
While designers tend to have strong opinions about what they like, Cunningham knows that it’s not okay to steamroll clients with one’s own personal tastes and preferences; rather, she prides herself on always putting the client’s needs first.

“The design isn’t about me; the design is about the client,” she says.

A project that exemplifies this was one in which she catered to a toddler. Cunningham’s clients recounted a fear that their young son would come into the newly renovated kitchen, open up cabinets and drawers and take things out. They said he did this in the current kitchen, as if he were looking for something. Upon hearing this, Cunningham began thinking that a drawer designated solely for the tot might solve the problem. She made sure to include a drawer in the remodeled kitchen that was low enough for the child to access.

“Everything is at his level,” explains Cunningham. “The family has told us that he’s not obsessed with opening every drawer and cabinet in the home anymore – he goes [straight] to his drawer.”