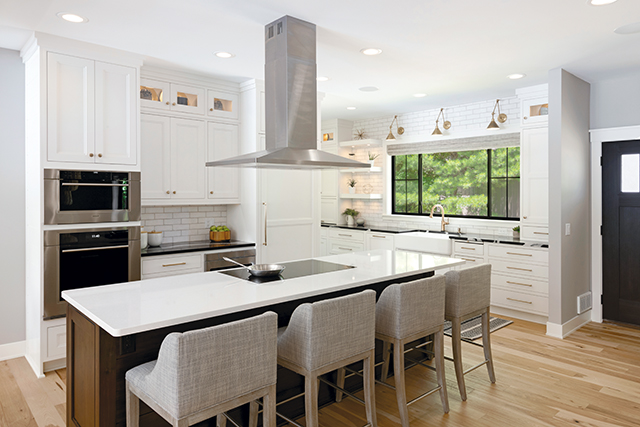 MINNEAPOLIS, MN — For Jolynn Johnson, CMKBD, CLIPPS, CAPS, the decision to purchase the design firm at which she had cut her teeth after college came after a flash of insight well after she’d moved on from the company. “One day I was driving down Interstate 94 toward St. Paul and I just woke up. I thought to myself, I should really own a business. I practically drove off the road,” she recalls. “So that was the start of doing some research as to how you go about starting a business when you’re 30 years old.”

A cabinet rep Johnson was working with at the time mentioned that Crystal Kitchen Centers – a company that Johnson had previously worked for at the beginning of her career – would be a smart purchase. In 1994, after negotiating the purchase of the company, Johnson took up the mantle of ownership. “I was home,” she says. “I knew everything – knew the people, knew the product.”

Johnson wryly attributes her handling of the smooth transition of ownership at the time to “stupidity” – “The first year was just an ulcer. My stomach hurt. It was like climbing a mountain,” she remembers. “I was a designer, I wasn’t a businessperson.” Although many of the lessons she learned about owning and operating a business came courtesy of the school of hard knocks, she benefited from friendly advice from those around her, from former company owners to patient bookkeepers. She’s learned a great deal from the experience of keeping a business afloat during a major recession and a pandemic, and Crystal Kitchen + Bath is celebrating more than 45 years in operation.

In her efforts to forge connections between her company and her community (and potential clients), Johnson has utilized her showroom to its fullest potential. Several times a year, Johnson hosts seminars in the showroom aimed at homeowners looking to better understand the remodeling process. “We give seminars about how not to make mistakes in remodeling, as well as what to do. We talk about technology and aging-in-place,” Johnson notes.

The seminar series, which is advertised in local papers, has proven to be a big draw that has generated a substantial amount of leads. “Every year I look at it and I think, okay, what did we do? How much did we spend? Is it worth doing again? It is time consuming.” Thus far, every year she has found the seminar series to be a worthy investment of time, energy and money, though COVID-19 restrictions have necessitated a temporary hold on the series.

Another bi-annual event that has drummed up plenty of buzz for Crystal Kitchen + Bath is the Remodelers’ Showcase, which occurs in spring and fall in the Twin Cities and features a tour of previously remodeled client homes. “That’s well attended, and you get a following,” Johnson remarks. “There will be people that come in and they’ll be talking about a house you did five years ago.”

In this time of social distancing, Johnson has managed to maintain her connections with clients and the industry through a strong social media presence, maintained by the company’s designated social media manager, as well as print magazine ads. 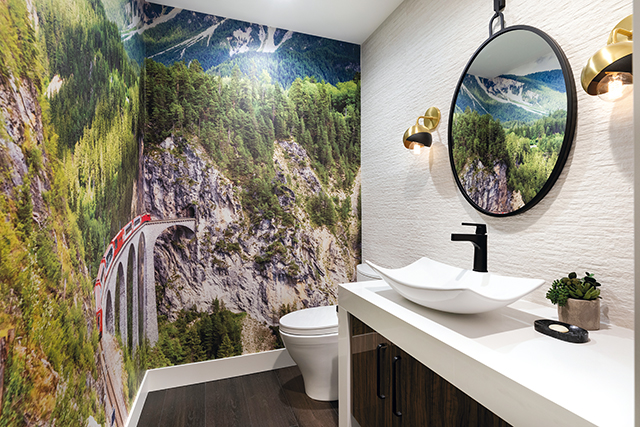 This bathroom is located in an autoplex – a storage space for collectible cars – the second floor of which was turned into a living space. Switzerland was the theme for this design, featuring a train mural on two walls in the bathroom with a view of Switzerland.

Over the course of her time working on kitchens and baths in the Twin Cities area, Johnson has come to understand her client base extremely well, from their budgets to their tastes. “In Minnesota, [tastes] are more traditional, a lot of painted white,” she observes, adding that she adores contemporary design and it’s always a treat when a more adventurous client comes along.

For Johnson, the getting-to-know-you process for clients is much like a job interview. “They fill out [a survey on our website] ahead of time and send it to us, and I really like if they take pictures of their space ahead of time and send it so I have a chance to review it before they get here. And then we sit down and talk for about an hour about what they’re looking for, what they don’t like about their kitchen, what they do like, why they came to us. I try to get answers for as many of those questions as possible, as well as go through budget.” She emphasizes, “That’s a very important question. They don’t leave without talking budget.”

This onboarding process is aided by technology, with large screen TVs featuring Chief Architect for demonstrations, as well as live displays featuring heated floors and other features that clients fall in love with. ▪