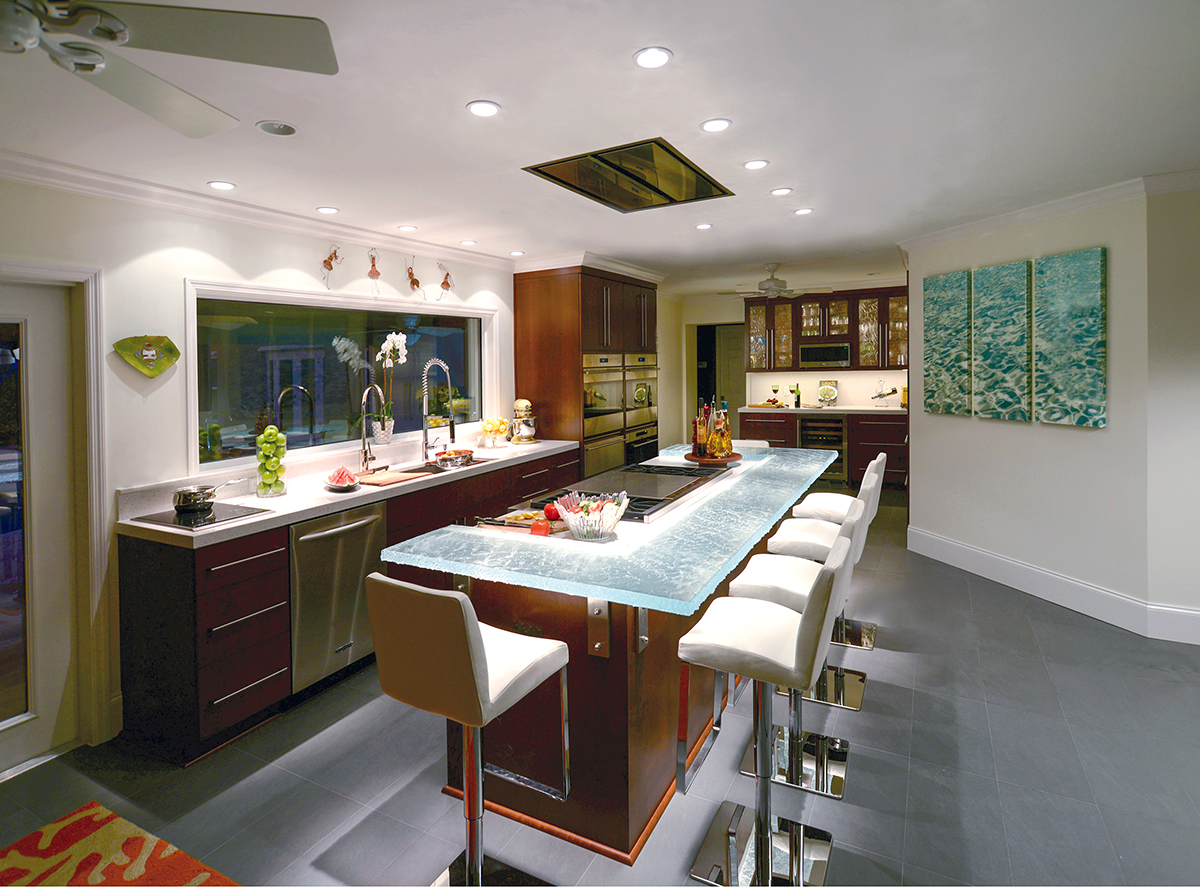 As a recurring theme in her designs is ‘bringing the outside in,’ Davis Brown often employs glass as a way to reflect the water and play with light. In this kitchen, the glass countertop reflects light through the window during the day, and at night is illuminated by MR16 lamps mathematically formulated to hit that zone.

VERO BEACH, FL — Designers reinvent spaces all the time. It’s quite another thing to reinvent a business model. However, that is exactly what Patricia Davis Brown, ASID, NCIDQ, CKD, CBD, owner of Vero Beach, FL-based Patricia Davis Brown Designs LLC did in the midst of the Great Recession – with great success.

“The Recession was probably my best friend to [help me] evolve,” says Davis Brown.

Davis Brown opened her own kitchen and bath showroom in 1992, catering to high-end clients. In 2009, in order to diversify in the midst of a tough economic environment, she began dabbling in the online business arena. Within a year, she came to the realization that it no longer made sense for her to have a brick-and-mortar location, so she closed shop and started a home design office to be more mobile. She also opened two online businesses to get a national foothold: an e-commerce site and an online design company.

“I really empowered myself to move into this century and conduct business on more of a national platform,” she notes.

At this point in time, Davis Brown was doing whole-house design, but still drawing by hand. To expand her services and embrace something new, she learned AutoCAD and started a blog, DigThisDesign.net (she was admittedly “in a yoga state of mind” when she created it), on the advice of the web developers she was working with. Little did she know that the blog would become a major staple in her career.

Within a year, her e-commerce site was competing against the likes of Amazon, and her virtual design company was evolving as well. It was then that she got a call from Brizo’s public relations company, which had seen her blog. They asked her if she would fly to New York to attend New York Fashion Week and Jason Wu’s show, as he had aligned himself with the brand. Although she hadn’t previously heard of Brizo, Davis Brown attended, along with 20 other bloggers, which is where she discovered a community of social media influencers.

“That was the first ‘a-ha’ moment where I said ‘wow, this blog is something,’” shares Davis Brown. “The blog [has] continued to surprise and amaze me; I’m still fascinated by it.”

After the Brizo event, she started receiving more and more invitations from various companies, becoming a staple in the design influencer community. Soon, her blog became her most successful internet business, which opened a lot of new doors and allowed her to build her brand.

Mentions Davis Brown, “By diversifying how I did business, I actually expanded my business and reduced my overhead cost which, to me, is smart.”

LIGHTING UP THE ROOM

Davis Brown pursued other avenues with regard to her business and skills, as well. She obtained multiple certifications, and participated regularly in continuing education to keep them up to date.

She started to seek out CEUs on lighting because she noticed that, in her experience, no one was really addressing it – neither the designer nor the architect. With a lack of proper lighting, she realized, “it was difficult to get [a] job to look as beautiful as it was in real life.”

Looking to fill a need, Davis Brown spent 10 years attending numerous courses on the subject of lighting. She acknowledges that she learned the most from an NKBA course with Michael De Luca and his book, Kitchen & Bath lighting…made easy. As a result of her efforts, she is now hired specifically for her lighting design services.

“Any room that I design, I make sure that it has a proper lighting plan, typically a layered lighting plan for kitchens and baths,” says Davis Brown. “Really nobody does that, so that carved out a niche for me that also helped make me successful.”

She also likes the flexibility that both lighting and working off of the internet give her.

“All I need from a client is the dimensions of the space, and I can develop a plan and a lighting design. Because of this, I am able to work without borders, and I like that,” she affirms. “The internet and technology [have] changed the way we all do business. I changed my business model in order to be able to be more mobile and not be bound to a big showroom anymore.”

Davis Brown has also become familiar with smart technology design, as she believes it goes hand-in-hand with lighting. She has a “go-to automation guy” with whom she works in order to make sure that the aesthetics of her lighting design are compatible with the technology.

“If I’m designing the zones of light and how they’re going to be switched, I don’t want a million switch plates on the wall,” she states. “I want my automation guy talking to the client about what’s available, what it’s going to look like and how it’s going to interact with the rest of the house.”

Another important factor in Davis Browns’ designs is bringing the outside in. Designing a lot for clients who live on the coast, she uses glass countertops to reflect and bring the ocean inside.

Today, Davis Brown can select which design jobs she wants to take on due to the success of her blog, her stature as an influencer and her 32-year design career with a specialty in lighting design. In 2016, she was hired to be a K+B Insider, trend spotting for the National Kitchen & Bath Association, allowing her to attend different design-related events and share her experience at various conferences as a speaker. Currently on the board of directors for the NKBA, Davis Brown has come a long way from her “old school” hand drawing days.

“If you evolve, your career will evolve,” she concludes. ▪