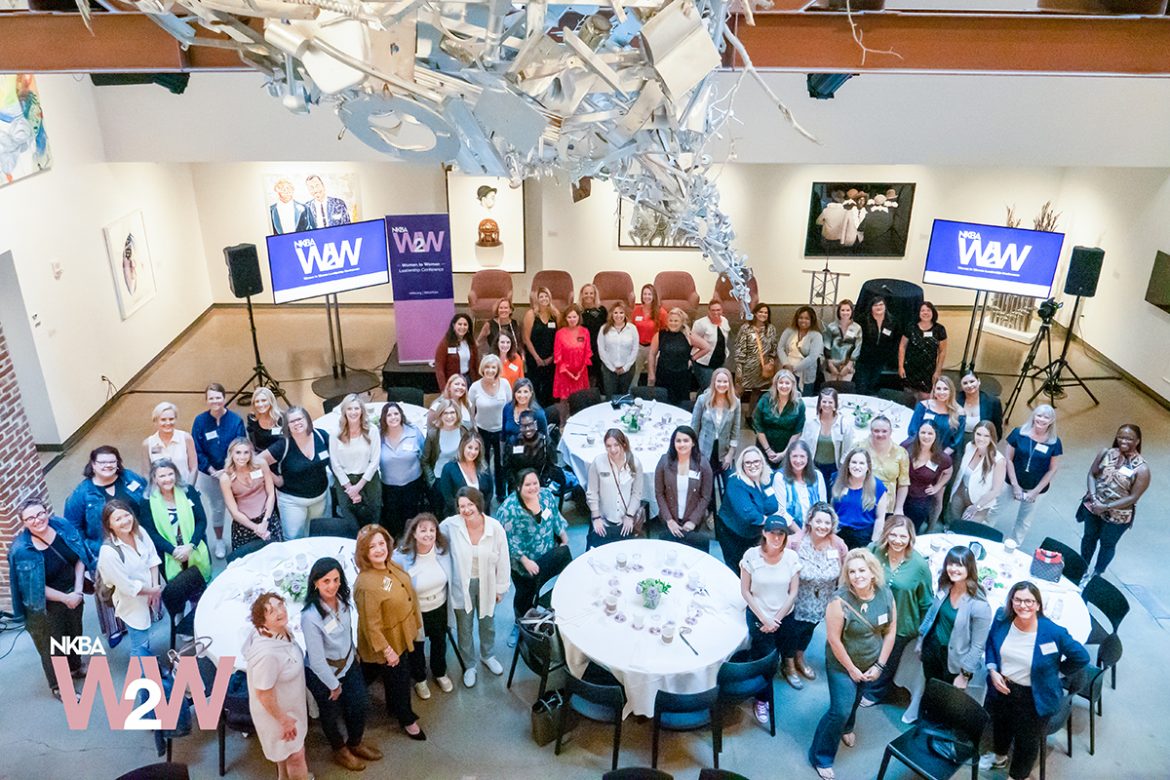 Members of the inaugural class of the NKBA’s Women to Women Mentoring Conference in Louisville, KY were treated to inspirational presentations, discussions and activities to enhance mind, body and soul. Photo: Courtesy NKBA

Fulfilling dreams. Setting goals – and reaching them. Overcoming burnout. Finding renewed inspiration. All of these topics and more were discussed by the group of women who were selected to be part of the inaugural class of the National Kitchen & Bath Association’s Women to Women Mentoring Conference, held September 6-8 at the 21c Museum Hotel in Louisville, KY.

The culmination of an idea conceived by Suzie Williford, exec. v.p. and chief strategy officer of the NKBA, and furthered via a conversation with Fortune Brands Water Innovations Group CEO Cheri Phyfer, the W2W Conference was created to bring women members of the association together to network in a positive, supportive environment.

“I wanted to create opportunities where women from all parts of the industry could connect, share and inspire each other,” noted Williford.

The NKBA received over 180 applicants for the event, with 75 members hand-selected to attend. Following the theme “Mind, Body and Soul,” the conference was designed to be an intimate gathering that encouraged honest and open discussions between attendees that allowed them to interact and connect in different settings.

Sarah Robbins, chief operating officer of 21c Museum Hotels, delivered a keynote address entitled “What It Takes.” The group learned about her background as a young hotel maid and her ROTC and Army Reserve service prior to her current status.

Stating that “she would rather be tired than bored,” Robbins acknowledged that building a brand is a lot of hard work, and “what we say yes to is as important as what we say no to.” She added that attaining a work/life balance is something that is practiced. “Some days you win, some days you lose,” she remarked.

She also said that she doesn’t believe in “‘fake it ‘til you make it.’ Instead, I tell myself, ‘I have the goods.’ I always told myself, ‘I can do this,’ and just got to work.”

In closing, she stressed, “It’s just a job. Remember to make time for the things that matter.”

Following the keynote, Williford led the panel of leadership advisors who discussed their lives and careers. The mentors included: Chas Daniels, owner, Acero Bella; Mary Putman, v.p. of Marketing and Brand, GE Appliances; Marcia Speer, CEO, Poggenpohl US; Sherry Qualls, CEO, White Good and Phyfer. The speakers discussed their personal and professional struggles and perseverance, and the quest to find balance, something that resonated with the women in attendance.

Phyfer noted that she had been trying to figure out how to work really hard and have a life at the same time, while Daniels focused on retaining the support of people, especially women. “Reach out to people around you. These are the people who get you to the next level. Be real, be honest.”

Qualls also stressed the importance of a support system. “We can’t do what we do if we don’t have other people,” she said, adding, “If you sign up to do it, get it done.”

Speer summed up her feelings with, “if you’re not under water, you’re not learning.”

Putnam relayed advice from her mother, that “kindness costs nothing.” She added, “Love your competitors and learn from them. And, at the end of the day, remember that attitude changes everything.”

“You allow the world to make you think you’re not as good as everybody else,” concluded Williford. “Don’t let them.”

After a lunch with the advisors, Body and Soul were the focus, as attendees were treated to their choice of art, yoga and meditation classes, as well as a tour of the city. The day closed with a festive “We Can Do Hard Things” dinner celebration and a bourbon tasting.

During the Thursday morning breakfast, attendees were asked to share one significant takeaway from the event. This networking time was followed by a tour of the Louisville-based Monogram Experience Center hosted by Putnam, which included insights from the Monogram design team, cooking demonstrations and panel discussions.

“There were many highlights, but I believe one of the biggest was hearing everyone’s stories of what they have endured to ‘make it’ in the business,” noted elizaBeth Marcocci, CMKBD, CAPS, designer and project manager, Mother Hubbard’s Custom Cabinetry in Mechanicsburg, PA.

Claudia Duffield, principal, Dell Anno Vancouver in Surrey, BC, noted that “we all face challenges, and having mentors, friends and connectors/supporters there that understand our business journeys and are there for us makes all the difference.”

Natalia Pierce, CKBD, AKBD, WELL AP, CLIPP, principal, Detail by Design in Ottawa, ON, wasn’t sure what to expect, but left “feeling this sense of connection that I have not had in a very long time. Being a solo-preneur, there are so many hats that we wear that we often lose sight of our true impact and purpose. This conference reminded me of my many accomplishments, my own story and, more importantly, my value.

“Overall, the conference provided a deep emotional connection in just knowing I am not alone,” she continued. “The last two years there has been a lot of ‘alone,’ and this conference ended that feeling.”

“It’s important to be vulnerable, and here you were allowed to be your true self,” remarked Lena McGuire, principal, Spóca Kitchen & Bath LLC in Camillus, NY. “It was the safest I’ve ever felt and the most seen I’ve ever felt. You felt like you were a part of something bigger.” ▪

A Life in Design