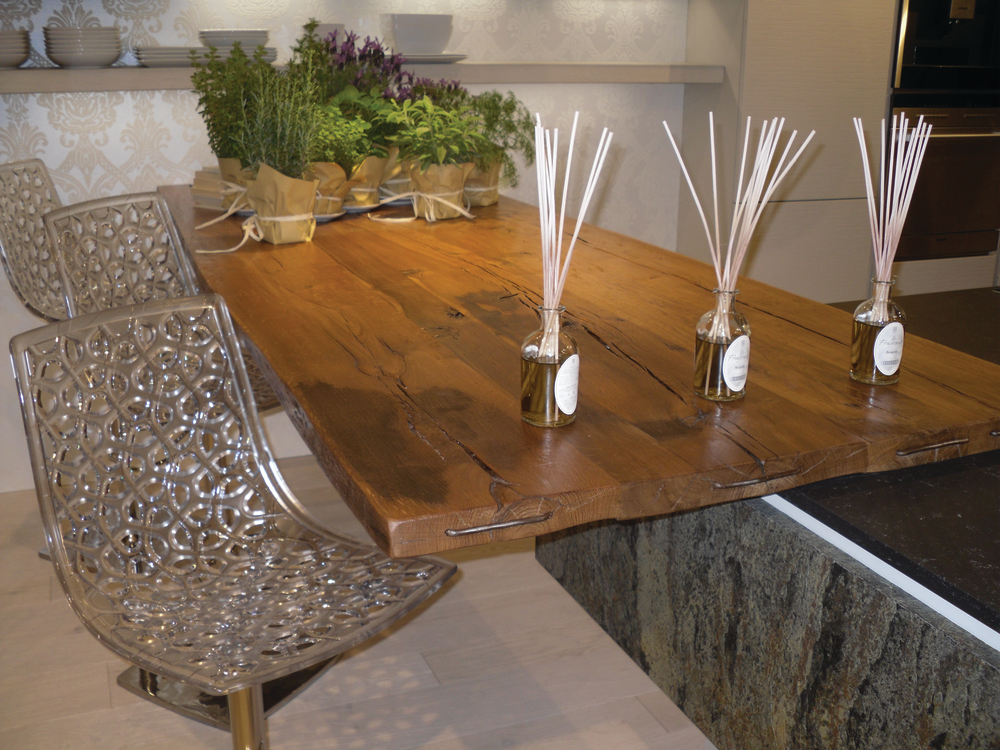 This past April, I was part of a group of American kitchen designers and trend watchers attending the EuroCucina Kitchen Fair in Milan, Italy. While there was some talk about it being a slightly smaller show – a reaction to the European economy woes – the exhibit presentations were as creative as ever. This month, I’d like to share some observations about the show.

The Saloni Fair is made up of four elements:

Close to 300,000 attendees from over 160 countries attended the Fair during its five-day presentation. The kitchen portion of the show had 166 exhibitors in six buildings, totaling 300,000 square feet of space.

As Leslie Hart and I have noted in past EuroCucina reports, the Fair is an astounding presentation of creative design ideas. Huge, full kitchen sets challenge the observer to capture both “big” design ideas and “small” design details.

This year, the Fair was dramatically different from past ones because many of the kitchen displays had a full complement of appliances. It made the settings more realistic. While European appliances continue to be smaller than U.S. ones, one American appliance that seems to be popular is our oversized refrigerator. Many displays included them in place of the smaller European version typically tucked inside of a pantry cabinet.

Our group pointed out some interesting observations about this year’s Fair. The first relates to how families outside of the U.S. view the kitchen. It was clear from the exhibits that the kitchen is the central gathering place to all global families.

In fact, I was delighted to see designers from around the world focus on families living in kitchen spaces that celebrate fresh foods and sustainable design. Just as we see at the Kitchen & Bath Industry Show, chefs at Eur Cucina presented cooking demonstrations, and company advertisements and brochures featured imagery of Generation Y couples, Gen X families and groups of singles cooking together and enjoying a meal.

The similarities between how our clients and European families value the kitchen was also seen in new product introduction descriptions. The importance of the kitchen was stated eloquently by designers of a new kitchen for Scavolini, the “Diesel Social Kitchen”: “For Diesel, the kitchen is much more than a place to cook a meal. It is the center of the domestic social focal scene. It is the warm heart of your home, a gathering place and a place to be nourished and delighted. And, of course, always the best room at any party!”

Below are some of the new and notable trends seen at this year’s Fair:

Many of the cabinet finishes introduced had a very organic feel to them. A textured, crafted look softened the modern styling everywhere. An appreciation for the rough texture of industrial surfaces and imperfectly finished materials were featured. This type of juxtaposition of rusticated and sleek has a warm – yet utilitarian – sense to it. This design trend is quite transferable to our U.S. clients who are interested in more contemporary spaces that stay away from the predictable internationally styled cold, sterile, glossy finishes.

Furniture sections were seen in many displays as part of the kitchen plan, rather than an area next to the kitchen work area. Additionally, there was a blurring of activity zones in evidence in many of the displays.

While there were lacquered finishes featured in some German-made cabinets and, indeed, many Italian settings, new materials launched were tightly grained rusticated woods. For example: scrubbed or wire-brushed pine and oak were “new”; the term “sand blasted” or “cooked” as a preparation was used; and, the term “striated” was used to define the grain pattern.

This same cabinet finish was launched last year at another important show in Cologne, Germany. It has also been specified by coastal trendsetting designers here in the U.S., identified as “fumed oak.”

I am smiling as I report on “oak” being the “new” wood for the discerning consumer. Indeed, in this Italian show, American oak was featured – oak with a wire-brushed finish.

These displays were very well done: balanced proportions within both symmetrical and asymmetrical elevations.

This is accomplished by well-engineered, oversized pocket door hardware, or sliding door hardware. By re-engineering the door construction, the cabinet manufacturers have been able to “lighten up” their oversized cabinet doors so that huge, uninterrupted single doors can be used.

While the displays are huge – even by American standards – there was an interesting “nod” towards small spaces. One display had tiny islands.

There was so much attention at this Fair about the kitchen being the heart of the home – and the displays were so huge, Leslie Hart, President of Fry Communications, New York, NY, Al Pattison, CMKBD, Manager of Kitchen Korner, Aldergrove, British Columbia, Canada and I wondered: “Is this really workable in Europe?”

Leslie’s comment was on spot: “For European families, the concept of a huge open gathering kitchen is more a statement of their desired philosophy about living – rather than it being about a guiding principle when managing space.”

Al commented that these huge displays were really a mosaic of shapes and forms. Therefore, because they were really blocks of designed spaces, they could easily be scaled down for more realistic, smaller kitchen environments.

As in the past, a door style detail seen was a continuation of integrated cabinetry pulls or highly styled, oversized handles as part of the design element of the cabinet face. Such a design detail requires discipline on the planner’s part: door and drawer sizes and configurations must be balanced to meet the aesthetic requirements of these continuous pull designs, and without compromising the functional needs of the interior storage space.

There was also a very different approach to the relationship of storage centers and work space counters. One back wall completely enclosed with tall floor-to-ceiling storage handles the shelf space typically filled by wall cabinets in an American kitchen. One or two islands then provide working counter surfaces.

As seen in 2010, quartz materials and simple monolithic counter surfaces were everywhere. There was very little marble and much less glass in evidence compared to past years. However, there was still a focus on very thin or very thick countertops and, in many cases, different thicknesses combined together. (One manufacturer of appliances integrated its units into a stainless steel counter offering: The seamless look was intriguing.)

Functional flexibility was definitely a highlight of the event. As such, moveable elements within the kitchen plan were everywhere.

While the dominating color themes were very neutral, some bright presentations were also seen at the Fair.

The value of attending international industry events is not found in exact details that can (or should) be copied. Rather, the value is taking time away from the realities of our business life and immersing oneself in the world of “What if, why not?”

Try to attend this event in 2014 if you have the opportunity. There’s much to be seen, and inspired by – and Milan, Italy in April is a great place to be!

Ellen Cheever, CMKBD, ASID, is a well-known author, designer, speaker and marketing specialist. A member of the NKBA Hall of Fame, Cheever gained prominence in the industry early on as the author of two design education textbooks. She manages an award-winning design firm, Ellen Cheever & Associates, and has been part of the management team of several major cabinet companies.

This article is part of a quarterly series of “Designer’s Notebook” articles, which runs exclusively in Kitchen & Bath Design News.

Note the hand-hewn nature of the wood top, with the modern man-made plastic stools. Photo courtesy of Castagna Salone.

The wood details really shine in this countertop. Photo courtesy of Castagna Salone.

Curved end cabinetry is featured here at the island and back wall of tall cabinets, showcasing another trend that was evident at this year’s EuroCucina. Photo courtesy of EuroCucina 2012 Press Office.

Rather than the American view of all L cabinets being one finish and the island another: the different colors are ‘mixed and matched’ within different cabinet elevations. Here, the backsplash is the same material as the island. Photo courtesy of Snaidero.

Pictured are examples of sliding doors in both the opened and closed positions. Photo courtesy of Dibiesse Cucine.

An attached table is placed at a right-angle to the island work surface. In island installations, telescoping downdraft ventilation systems were seen throughout the show. Storage is provided along the back wall. Not many wall cabinets in sight! Photo courtesy of Toncelli.

A counter section could be raised or lowered. Photo courtesy of Team 7.