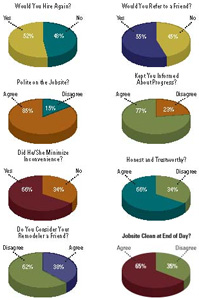 Within the world of top remodeling professionals, there is a general sense of pride that comes only from years of satisfying customers and from building a business that has a sterling reputation with many repeat customers — many of whom they consider friends. But among that group there is also a nagging association that sometimes rears its ugly head. These upstanding professionals are often linked in the general public with a widespread notion that remodelers and home contractors in general, should be approached with suspicion.

In recent years, a number of consumer opinion surveys have placed remodeling contractors low on the list of admired or respected professionals.

To move beyond the anecdotal realm of why the larger remodeling and home improvement industry suffers from a poor reputation and to begin to pinpoint the underlying reasons for this image, Qualified Remodeler teamed up with ReNex Inc. ( www.renovationexperts.com ) , to survey homeowners who had recently remodeled their homes.

Over the course of several weeks, 700 homeowners rated their remodelers in a number of categories, most notably: overall satisfaction; willingness to refer to a friend; willingness to hire again and overall quality of workmanship.

The general results confirm what many in the industry already know. Remodelers who employ industry best practices like setting proper expectations, sticking to production schedules, etc. typically fare much better in the minds of their clients than those who don’t. That said, the responses also confirm a low-to-mediocre rating for home improvement and remodeling contractors that generally seems to lie at the heart of why consumer perceptions of remodelers tend to remain so low, year after year.

Among more than 700 remodeling clients surveyed — who completed all types of remodeling jobs from siding, roofing and windows on up to whole-house remodeling — homeowners rated their remodeler’s performance remarkably low.

• About 85 percent of remodelers and their subcontractors were deemed to be “polite and courteous” on the jobsite.
• About 66 percent were perceived by their customers as having “minimized inconveniences” as much as possible during their remodeling project.
• More than three quarters of the respondents (77 percent) say their customers were “kept informed” about the progress of their jobs.
• About 65 percent recalled that their jobsite was swept clean at the end of each day.

Beyond these up-or-down assessments of remodeler service and results, the homeowners surveyed were asked to rank their remodeler’s performances in a range of categories on a scale of 1 to 10, with 10 being the best score and 1 being the lowest score.

The aggregated scores were poor. Under the category of “overall satisfaction” the average score was 6.29, and the same trend followed in subsequent categories.

The better news for remodeling professionals came as each of these ratings were categorized by:

This report includes graphical and analytical information for each subtabulation listed above.

The remainder of the analysis, however, will center only on the satisfaction scoring:

Scoring by type of remodeling project

The results showed significant differences in levels of homeowner satisfaction with all parts of their remodeler’s performance when tabulated based on the type of remodeling project undertaken.

The survey asked the respondents to pick one of seven categories by which to classify their job: basement, exteriors, handyman/other, kitchen/bath, porch/deck/sunroom, room addition, or whole-house remodel.

The chart “Grades by Type of Job” shows that porches/decks/sunroom jobs fare a better chance of overall satisfaction (7.13 on a scale of 1 to 10) than any other type of job.

In fact the trend seems to be that the larger or more complicated the job, the lower the overall score. Homeowners who had renovated their “whole-house” gave an overall satisfaction rating of only 4.95.

One of the conclusions brought home dramatically by the QR/ReNex survey of home-owners who recently completed a remodeling project is the importance of leaving the jobsite clean at the end of each day.

Keeping the jobsite clean also seemed to translate to higher scores in other areas. Workmanship rose to 8.03. Professionalism rose to 7.86. And scores in the typically hard-to-please category of timeliness rose to 7.24 for companies that kept clean jobsites.

For companies that were not perceived as being able to keep the jobsite clean, scores fell to a range of three and fours. (See chart “Jobsite Clean Each Day.”)

The pie chart “Kept You Informed About Progress” should provide plenty of incentive for remodelers to spend more time and effort communicating with their customers.

Among the 77 percent of homeowners surveyed who said their remodeler did a good job keeping them informed on the progress of their project, scores for overall satisfaction was nearly five points higher than for those who did not keep their clients informed, (8.01 vs. 3.28).

In the toughest category to please — timeliness — good communicators were rewarded with ratings of 7.60 vs. 2.72. Keeping clients informed had the single biggest impact on the overall level of customer satisfaction. See “Informed vs. Not Informed.”

Setting proper expectations is a different take on keeping clients informed, but the notion clearly had traction among those homeowners handing out good scores for their remodelers.

Satisfaction, professionalism, timeliness, fair price and workmanship scores are all in the mid-7 range for those companies whose clients thought they had done a good job setting expectations about job schedules, completion dates, etc.

Not surprisingly, setting proper expectations seemed to have the most impact on scores for timeliness.

Most full-service remodeling firms offer design services to their clients. This is also true for many specialty contractors who have taken advantage of new CAD software and Internet- based visualization programs to give their potential customers a better idea of what their finished project will look like.

When the survey results were tabulated based on whether or not the remodeler did design work for the client, higher scores resulted for those that did design work, but those differences were less pronounced.

Those who did design work did much better on the question of fair pricing (7.28) and workmanship (7.20), but it had less positive impact on scores for timeliness.

This report indicates there are two separate worlds of remodeling activity. There are those that are well-versed in business and display a wide variety of skills, chief among them: communication skills, good follow-through, accurate pricing, and good workmanship. And there are those whose skills do not match the many challenges of completing remodeling and home improvement projects. The latter group is much larger. Their activities continually generate negative impressions of the industry allowing overall perceptions of the industry to stay at levels below what is acceptable. Education and training can be key difference makers.