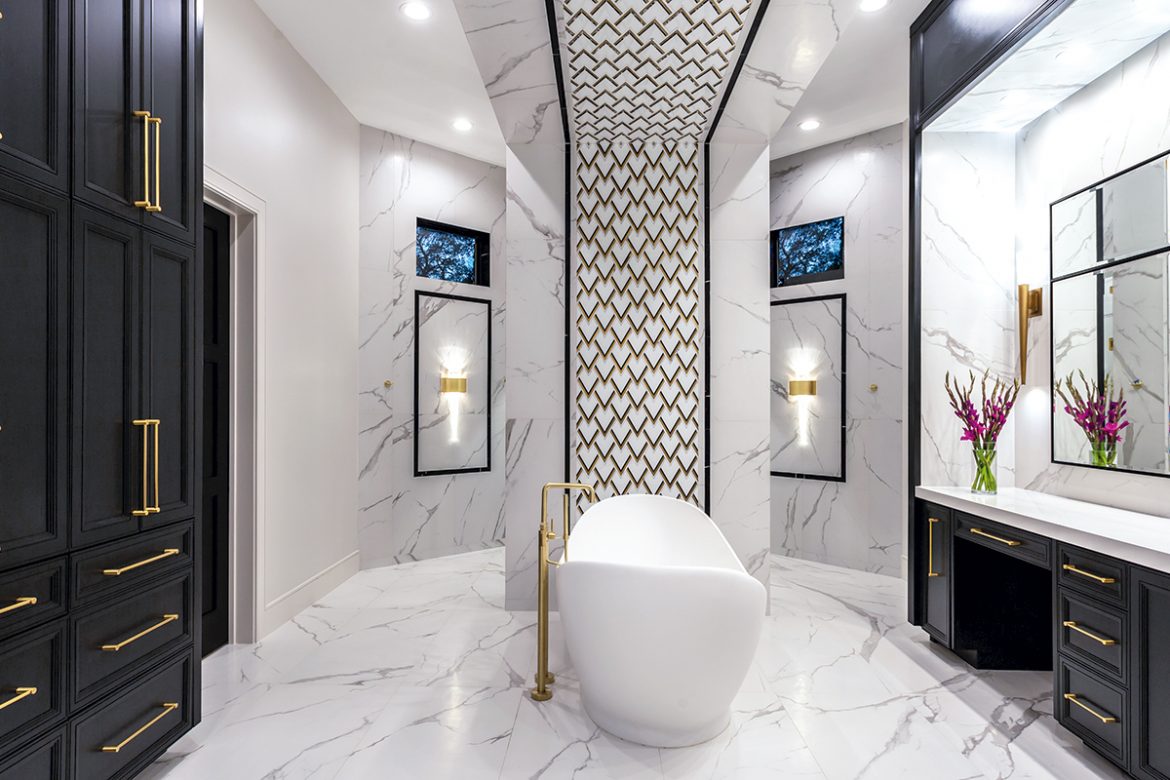 Design software helped Lori Toups-Fenton determine the best way to utilize the marble waterjet mosaic tile that takes center stage on the cantilevered ceiling in this master bathroom. She played with multiple designs to determine exactly where and how to use it, ultimately deciding to position it only along the back wall and up onto the ceiling to give it a linear look. Photos: Kenneth Fenton

Professional kitchen and bath designers have a special talent for being able to visualize just how certain elements, materials and products will look in any given room. Coupled with the use of design software, there are virtually no surprises from concept to completion.

Yet, even still, there’s something special – even to the experts – about seeing a certain design element or material come to life and turn transformational in a space.

“We can provide three-dimensional views for customers who request them,” says Kenneth Henry, CKD/CBD with Alspaugh Kitchen & Bath in St. Louis, MO. “However, there’s nothing like seeing the finished room in person.”

Lori Toups-Fenton, ASID/interior designer with SweetLake Interior Design in Houston, TX agrees, adding, “It’s amazing the amount of detail we can include in drawings, even down to faucets. It really means there are no surprises, which is especially beneficial when working with high-end clients. However, it’s always better in person.”

“It’s a huge resource for us,” she says. “It allows us to steer the ship, and get direction – both good and bad – early in the process because we can explore various materials and do a deep dive to see how something might work as a focal point.”

Bold in black and white

Design software certainly helped Toups-Fenton determine the best way to utilize the marble waterjet mosaic tile that takes center stage, literally and visually, on the cantilevered ceiling in the master bathroom of this new construction home.

“Our client loves black and white, so we wanted to find a way to use those colors, mixed with gold to warm up the space,” she says. “When we found this tile, it became the inspiration for the entire bathroom.”

Its modern take on fish scales, via a unique combination of diamond, chevron and triangle shapes, is also highly patterned, which Toups-Fenton appreciates.

“It’s important to have a lot of pattern when doing black and white,” she indicates, “otherwise the room will look cold.”

While the designer valued the tile’s boldness, that same attribute could also make it challenging to work with, which is where the design software came into play.

“We played with multiple designs to determine exactly where and how to use it,” she says. “In the end, we decided to use it only along the back wall and up onto the ceiling to give it a linear look that turns it into a beautiful feature wall.”

Toups-Fenton gave the tile the ability to shine via a quieter foundation of black cabinetry accented with gold hardware and 24″x48″ porcelain marble-esque tile that clads the shower, floor and vanity alcove. Gold-toned sconces in the shower, located behind the feature wall, are framed in strips of black tile that balance the windows above.

Simultaneous to this home project, Toups-Fenton was also working on another new construction residence where her clients wanted to include a ‘wow’ element for their kitchen. To accommodate, she created a focal-point window/range wall that offers a unique take on the typical windows-flanking-the-range concept.

“It isn’t uncommon to see two windows to each side of a range,” she notes. “But we were able to incorporate metal into the framing of the structure of the home, which allowed us to wrap windows around the backsplash.”

To further the look, she mounted the ventilation hood in the ceiling so as not to detract from the sleekness of the feature wall. Book-matching the porcelain slabs creates a long continuous vein that extends the breadth of the backsplash, while a gold-toned potfiller serves as a point of interest. The designer repeated the marble-look porcelain as the countertop surfaces for the perimeter as well as the island, which is complemented with a lowered seating area with a metal laminate countertop.

While the main focal point showcases the backyard, Toups-Fenton created a secondary point of interest on the ceiling via an accent of 1.5″ strips of oak, stained in a warm hue that plays off of the Treefrog veneer cabinetry.

Henry knew there was unrealized potential for this kitchen because he had been in the home previously, before the current homeowners purchased it.

“I always thought the kitchen could be a nice entertaining space if the wall between it and the family room was removed,” he says. “But that didn’t happen until the current owners, long-time clients of mine, bought the house and asked me to take a look at it to see what could be done to change the kitchen. I had been there before so I already had some thoughts about it!”

Given the go-ahead to finally tear down the wall, Henry designed a new kitchen that focused on family. At its heart is the T-shaped island. Its unique silhouette allows the homeowners to enjoy having their grandkids nearby to the adults who, during holiday gatherings, are seated at the dining room table behind it. Its shape also allows for effortless flow throughout the kitchen and into adjacent spaces.

“I initially proposed two islands,” says the designer, noting the room’s generous dimensions could easily accommodate multiple islands, or even one oversized island. “However, she believed the T-shape could still fill the space, as well as adapt to her needs. I hadn’t done this shape before, but I think it turned out fantastic.”

Even with its sizable 10’x9′ measurements, the homeowner can easily reach across to clean every square inch. The island’s quartz top, which is two pieces joined to appear seamless, also promotes easy cleanup given its composition. A thick mitered edge gives the island ‘heft,’ making it more proportional to the room’s high ceilings.

Henry repeated the quartz selection in the bar, which is located immediately adjacent to the kitchen via a door, and the pantry, which is sited across from the bar and behind the refrigerator. In the bar, Henry purposefully positioned the surface material to showcase its bold veins by installing it horizontally as the countertop and vertically as the full-height backsplash, perfectly matching the veins at the intersection.

Additionally, the quartz’s deep gray color fits into the homeowner’s desire for a kitchen with warm gray tones. It also serves as a relatively dark backdrop for the white veins that tie it to the perimeter countertop surfaces.

The warm gray color palette is furthered by the cabinetry – painted in Sherwin Williams’ Amazing Gray – and the floor, which is unexpectedly hickory that ultimately tied everything together.

“The floor was a real surprise element in the space,” Henry notes. “We had to piece in some wood where the wall was removed, but the floor refinishing company was able to sand it and change its color to more of a warm gray. Based on the colors we selected for the kitchen, it really turned out great!

Checking all the boxes

The team at Case Design Remodeling often works in smaller homes and condominiums where tight working conditions can change, and challenge, a renovation. Of note are those that relate to floorplan layout and transportation of materials during construction. With regard to the former, mechanicals – such as moving a dishwasher or relocating a window – oftentimes simply cannot be done. As it relates to the latter, elevators often factor into how materials actually get on site.

“We might be working on the 27th floor of a high rise,” she comments. “A massive porcelain slab for a shower or backsplash simply won’t fit into an elevator or around a tight corner, and breaking it up into sections isn’t always aesthetically pleasing because now there are seams in the beautiful pattern.”

Such challenges came into play in the recent renovation of a condo where the designer, who worked in collaboration with Elle Hunter, couldn’t make any changes to the layout of the client’s kitchen or bathrooms.

“Part of the fun of the design process is seeing options in terms of changing the layout,” says Hubbard. “We couldn’t do that for this client, so we made up for it in material selection. Fortunately, he gave us a lot of artistic freedom, and he wasn’t afraid to make bold decisions to make his spaces pop.”

Given the green light to get creative, Hubbard searched the internet to find a ‘wow’ element that would change his spaces. Ultimately, she found the work of Alex Turco, who crafts decorative art panels for indoor and outdoor applications. The piece they selected for his kitchen boasts shades of gold and white on a sea of blues that bolt across the glossy composite aluminum panel. Hubbard sheathed three walls with the vibrant panels, creating a wraparound effect that gives the space a pop of color, as well as dimension.

“The panels are the shining star of the kitchen,” says the designer, who knew, thanks to 3D modeling, that they would transform the space. “We selected this element first, then built the rest of the room around it.”

Hubbard and Hunter also renovated their client’s master and guest bathrooms, where they included composite aluminum panels in the showers. In the master bathroom, a more industrial selection offers a monochromatic color palette with silver, black and gray coordinating with black plumbing fixtures. For the guest bathroom, the panel’s reds, grays and whites play off of a special piece of art that graces its wall.

“Aluminum panels aren’t something we think of using every day,” she says. “But they were the perfect solution for this renovation. They really checked all the boxes. They are lightweight and flexible so we could move them in and out of the elevator as complete panels. They are also trimmable, so we could cut them onsite. In terms of production, they were a big win. They also offered a big win in terms of aesthetics because they made the spaces modern, inviting and eye catching. They are beautiful to see in person, and we’re glad he was willing to take a chance.” ▪

Clean and Colorful on the Coast

The Art of Japandi