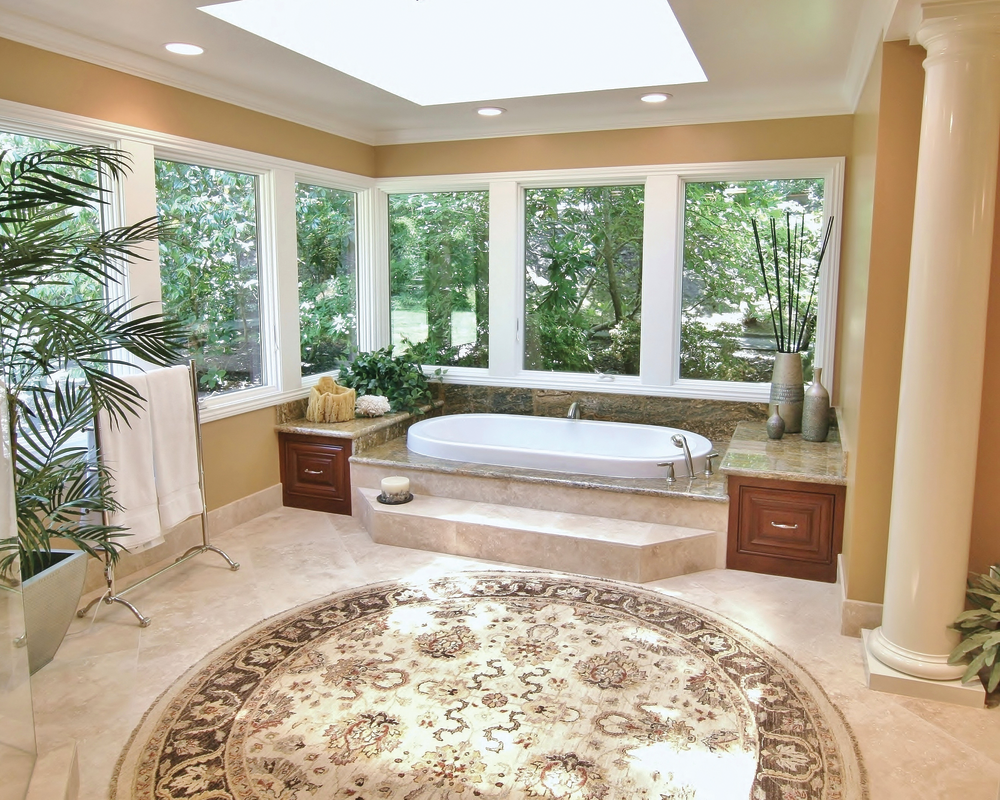 HILLSBOROUGH, CA – For many bathroom remodels, space seems to be an ever-present challenge. While it’s usually a lack of the commodity that is most challenging, for Designer Ione Victoria, too much space was a bigger dilemma in a bathroom remodel in the home of legal professionals who live in Hillsborough, CA, a high-end residential neighborhood just south of San Francisco.

“Designing a very large space with endless options can be more difficult to navigate than a smaller space with few,” says the principal designer of Santa Cruz-based Paradise Interior Design. “It takes a great deal more planning and imagination to define the space and keep it from feeling too vast and too cold.”

The previous bathroom area consisted of several smaller rooms, one which was home to a 10-person hot tub and another which housed a steam sauna for an equally large number of people. A single-stall shower, small vanity and toilet were in a separate area, all served by a small amount of storage space. “I think it was built in the 1970s as ‘party central’,” she says. “It didn’t quite fit this family’s wish for a luxury master bath.”

One feature the homeowners did want to maintain was the view to a beautiful exterior garden, landscaped for privacy, which could be seen through a series of several large windows that spanned much of two adjoining walls. “We wanted to utilize the existing window layout and create a design where my clients could enjoy the serenity of a lush garden bath,” she says.

To accomplish that goal, Victoria had to remove the wall that separated the hot tub and sauna. Since it was load bearing, the designer had to get creative to find a way to support the ceiling without reengineering the roof, which would have been too costly.

Her solution was to include two Corinthian pillars that provide the needed support while simultaneously creating a romantic portal from one area of the bath to another. “They help define the spaces within the new, large open floor plan, which now is about 550 square feet,” she says.

“Then you realize the huge, double shower is an extension of the dream, complete with twin rain shower heads and so much room the glass enclosure doesn’t even get wet,” she continues. “And because it’s clear glass, the homeowners can enjoy the view.”

Large 18″ by 18″ Travertine tiles, the same ones used on the floor, enhance the natural garden appeal and add elegance. “Using large tiles kept the pattern to a grand scale,” she notes, adding that large crown moulding and baseboards also add weight to the room and help anchor the space while tying in the architectural detail of the pillars.

Radiant heat blankets underneath the floor tiles provide warmth, as does the Behr Peanut Butter paint color on the walls. “While I made [product] recommendations, my client made all the final color and fixture selections,” notes Victoria. “She has great taste. The rich, deep color helps cozy up the space.”

Finishing touches to the room include a dressing/sitting area and a separate enclosed half bath. Multiple lighting options, on separate switches with dimmers, allow each area to be lit individually. A night light in the portal between the pillars enhances the romantic feeling of the space.

Custom cabinetry topped with granite, which also covers the tub deck and hamper drawers on each side of the tub, increases storage options, as does the built-in gentleman’s armoire and walk-in closet located between the master bedroom and master bathroom. A makeup vanity with a lowered countertop and ottoman give the homeowner a functional, beautiful space to get ready each day.

“The space is so different than it was before,” says Victoria. “It was the final stretch of remodeling their home. I loved working with them and sharing in their fantasy.”