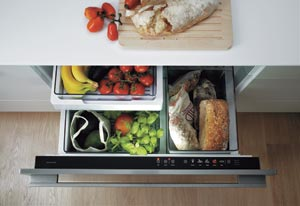 Under-counter appliances can be found in an even mix of high-end new construction and remodeling projects. They give kitchen designers a larger range of placement options and give homeowners a greater array of convenience. The types of under-counter appliances now include refrigeration/freezing, microwave cooking, warming and dishwashing and provide greater lifestyle flexibility in the home.

“I think when homeowners started wanting to store their own wine collections, it sparked a lot of under-counter appliance innovations,” says Chaya Chang, marketing manager, residential and hospitality products, Perlick Corp. “As homeowners asked for wine reserves, builders then looked at other ways to save room in the kitchen and create additional counter space by placing everything under-counter.”

Some common finishes exist in the under-counter appliance market. Stainless steel is the most popular. What once was a trend in high-end appliances has now become a classic look. Almost all under-counter appliances are available in a stainless steel option. The second common finish is wood overlay. This is a popular option for kitchen designers and homeowners who don’t want to see their appliances, but would rather have them blend in with the look of their cabinetry. Most manufacturers will supply a template or dimensions that can be taken to a cabinetmaker to build the wood overlay. If neither of these choices fits a home’s decor, manufacturers typically offer black and white color options.

The circle of life for under-counter appliances begins with keeping things cold. Perlick specializes in under-counter cooling appliances from freezers and refrigerators to beverage centers and wine reserves. Perlick prides itself on some innovations such as stainless steel interiors, variable-speed compressors, full-extension shelving and RapidCool technology.

“RapidCool is similar to convection cooking, where we’re forcing air into the refrigerator to keep the same temperature from top to bottom, front to back,” Chang explains. “We have a fan on the top of the unit and an intake on the bottom that’s constantly forcing air through it to keep a consistent temperature. This is different from most refrigeration units that use cold plate technology to move coolant through a panel of coils in the back of the refrigerator, keeping it cool in the back of the unit and warm in the front.”

Manufacturers are accommodating homeowners’ desires to live in smaller spaces such as luxury apartments and condos with under-counter appliances. Some under-counter refrigerators can provide up to 12 cu. ft. of storage space.

“I don’t think under-counter refrigeration will replace traditional units, but I think it gives designers and homeowners an option for different looks,” Chang adds. “Under-counter appliances are point-of-use products that can be put anywhere they are needed, and not just in the kitchen.”

Manufacturers don’t expect under-counter appliances to replace traditional stand-alone models, with the exception of microwave drawers. Sharp introduced its next generation of microwave drawers with a new 1.2-cu.-ft. capacity that has an increased cavity height. This allows for taller dishes and includes sensor technology that is programmed to cook food to the correct length of time and wattage based on the particular food in the drawer.

“One of the reasons we introduced the microwave drawers is because we were getting so much input from the kitchen design community,” says Christine Lewis, associate vice president of marketing, Sharp Appliances. “What’s happening in kitchen trends today is the elimination of walls, putting in windows and basically hiding everything else. So a microwave drawer lets you take it off of the counter and not have to be placed over a range, because kitchen designers don’t like the in-your-face design of a microwave.”

What makes the microwave drawer different is its design — placed at the most convenient working level which is waist high. This eliminates the need for a homeowner to open the microwave, remove the food to stir it and then replace it for further cooking. It becomes especially helpful with the aging population, and for those with physical limitations, who find it more difficult to do anything over waist high.

“I honestly believe that one day microwave drawers will overtake stand-alone models,” Lewis says. “I think the only thing that is slowing down a rapid conversion is a slowdown in remodels and new construction.”

Warming drawers probably are the most misunderstood under-counter appliance. What they’re used for or just how helpful they can be doesn’t always resonate.

“I think most people look at warming drawers and simply think it’s just a way to keep food warm for a party, or a family on-the-go keeping food warm for someone getting home later,” says John Anderson, senior product development manager for built-in ovens and warming drawers, Whirlpool Corp. “The uses they probably overlook are to proof bread, the plate warming function and for the KitchenAid brand, the slow-cooking option.”

In general, warming drawers are better suited for foods with higher moisture content because warming drawers’ nature is to take moisture out of food. If you leave food in for an extended period of time, you run the risk of food drying out. For this reason some people put a small bowl of water in the drawer with the food to try and maintain moisture levels.

Warming drawers typically are installed beneath a built-in oven, so it’s usually not a separate under-counter installation. A variation on this column approach would include a built-in microwave, followed by a built-in oven and then a warming drawer. As design changes, warming drawers are showing up off to the side of cooking zones, especially in 24-in. widths that can fit into a normal cabinet space.

Manufacturers offer either single- or double-drawer options, where the double drawer fits the cavity traditionally set aside for a tub dishwasher. The beauty in using dish drawers over traditional models is the convenience, savings and incorporation into the surrounding kitchen.

“Builders really enjoy the ability to take two single drawers, split them up, put them on both sides of a sink and raise them up off of the ground,” explains Brian May, program manager, premium brand dishwashers, Whirlpool Corp.

“That keeps customers from having to bend way down to get dishes in and out of the dishwasher. Additionally we are finding people who will purchase single drawers to put in a bar area, or downstairs in an entertainment area to manage light loads and glassware.”

Smaller families and those whose children have moved out are processing dishes only for a single meal. Dishwasher drawers allow these families to load one drawer and start washing it while the other drawer remains clean, instead of having to wait two to three days to gather a complete load of dirty dishes to wash. They also save energy and money by not running half loads of dishes.

“We currently don’t tie into home technology systems, but I think there are a lot of companies looking into that,” May says. “In terms of smartness we have sensor technology that performs a lot of calculations and analysis on soil levels. When the customer pushes a button, it will measure the soil level coming off of the dishes and the cycle is going to adjust to accommodate that.”

In terms of capacity, there is some loss with drawers, with the average drawer holding five place settings each for a total of 10 place settings in a double drawer system, and a tub holding 12 to 14 place settings. Although the base rack is fixed with Whirlpool’s dishwasher drawers, they have cup shelves, stemware holders and rows that fold down or up to accommodate a homeowner’s lifestyle.