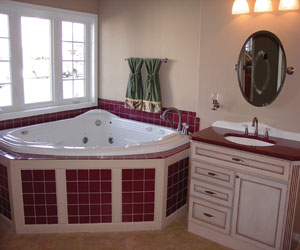 In decades past, the concept of the 21st century home conjured up images of instantly prepared food, robots doing household chores and wide screen televisions providing two-way communication. Amazingly, those images of 50 years ago ring truer than imagined, as demonstrated in the NextGen Design Idea Home, the first Design Idea Home of its kind to be displayed at the Kitchen/Bath Industry Show, held here in May.

While the 2,050-sq.-ft. Idea Home showcased new trends in home design for the entire house, it offered a special focus on the kitchen and bath areas.

“We had this house at the Consumer Electronics Show, and the National Kitchen & Bath Association had an interesting idea about showcasing how technology is evolving into the kitchen and bath,” comments Paul Barnett, president, iShow, which produces the NextGen Home Experience. “As a result of their interest, we pulled together a more elaborate kitchen and bath than we were planning.”

Indeed, state-of-the-art electronics, technologically advanced products and innovative design ideas were all part of the offering. “There’s a lot of connectivity in the home,” Barnett continues. “You can control the house from your cell phone or an Internet browser from your desktop at the office. You can cook, check security, adjust heating and ventilating – there’s even a water shut-off valve in the event that a pipe breaks – all from [another location].”

The Center of It All

“We wanted the project to have a pretty broad appeal–a home that would seem appropriate for a professional couple or even a small family,” reports Mark T. White, CKD, owner and chief designer, Kitchen Encounters. The 14’x20′ kitchen, which was designed by White, featured a contemporary aesthetic, acting as the center of the home’s activity – a place to cook, eat, relax and entertain.

Miele’s new CVA 2660 built-in capsule coffee system, which uses Nespresso capsules to brew fresh coffee, was built onto the countertop at the end of the peninsula that divides the kitchen and the dining room. “We located it there so that it would be accessible and convenient from the other parts of the house without getting into the cook’s space,” offers White. He notes that the center became a nice design element because of the way it was enclosed. “It was in something like a cabinet box, and it sat up higher on the counter, so not only was it conveniently located, it became a bit of a centerpiece.

You could place a vase or something similar on top, adding some interest to the plan,” he explains.

Located along that same wall was the kitchen sink, which was paired with the new electronic kitchen faucet from Brizo. The faucet design incorporates hands-free technology and touch control, featuring the ability to turn water flow on and off by tapping or by the traditional hands-free method.

On the opposite side of the room along the back wall, White incorporated what he believes was one of the major visual elements –- the built-in cabinets. The set of cabinets goes almost floor to ceiling, yet the units were only 12 inches deep. This was done for a few reasons, according to White.

“We wanted to have an island in the kitchen, and to have the proper clearance around the island, we couldn’t have had full-depth cabinets on that side,” he explains. “Still, we wanted to have cabinets that would provide pantry-type storage. So, we took advantage of that space with this wall full of cabinets.”

Open spaces and display areas were incorporated into the wall cabinets, and at one end of the wall of cabinets was a zone that was specified to accommodate a laptop computer. “This is one of the elements that we’re working with a lot in kitchens these days, and we did it specifically in this home to take advantage of the available technology,” White details. “It was a small area that provides a message center.”

Also taking advantage of the available technology today was the range of appliances used throughout the space. Located between the two areas was a wide range of kitchen appliances that offer a number of technological extras.

A KitchenAid refrigerator with stainless steel doors sat in the corner along the side wall, located next to the double wall oven from TMIO, LLC. The ConnectIo Intelligent Oven features a Professional Series cooking system, built-in refrigeration and TMIO control technology. Food placed into the oven stays refrigerated until a pre-programmed cook time, or cooking can be started via the Internet or cell phone.

Also featured in the room was a freestanding range from Siemens Home Appliances, which was angled in the corner to accommodate the open floor plan, a Siemens microwave located above it, and a dishwasher, also from Siemens.

The DG155 Convection Steam Oven, as well as the Plate Warmer, both from Miele, cooks and warms through the use of convection, forced air heating. “It’s a great item for healthy eating and cooking,” states White.

The high-tech vibe of the house lent itself to contemporary design elements, according to White. He chose to use Merillat’s Shaker door style in a lighter, warm wood tone for the kitchen cabinets because they can be transitioned easily to a more contemporary look {“depending on how you decorate with hardware, colors and other elements that go into the space,” he comments.

The cabinets were all functional storage, with drawers and roll out shelves, White adds. Topping off the Merillat cabinets were deep-toned Zodiaq quartz countertops from DuPont.

The kitchen layout also included an island “because it created a nice flow in and around the kitchen,” comments White. “If somebody was busy working in the main cooking area, someone else could come through the laundry room and bypass that work area without interrupting the cook.”

The counter featured a freeform shape on one end, which was created as a gathering space. “That also made it a very convenient layout for serving buffet style at parties and for entertaining,” notes White. The island was topped by a Miele DA230 island hood.

“To accommodate the large whirlpool bath from Aquatic Industries, we bumped out the bathroom wall where the windows were,” White acknowledges. “This gave us more room inside the bathroom by pushing the tub into that bump out.”

He adds that the bump out actually worked out to be a nice complementary architectural element, because that side of the house had similar bump outs at the front of the home and the back master bedroom. “It enabled us to get a corner shower [from Aqua Glass] in there,” he reports.

“Angles in the bathroom often create more visual interest, as well as better flow and feeling of space,” he reports, “so we positioned the Tessera In-Wall Toilet System from Geberit in the corner against that little angled wall. And, the toilet had a concealed tank built into the wall, so it was really clean looking.”

The toilet was nestled between two vanity cabinets, so it had its own little niche, he adds. “It enabled us to separate the twin vanities, allowing each spouse to have their own space. It’s more desirable than just one long counter with two sinks in it.”

The vanities were from Merillat in the same Shaker style door as the kitchen, though they featured more details and traditional touches. The cream color with spice red toned accents complemented the red countertops from Corian and tile work featured throughout the room. The sinks were paired with e-Flow faucets from Delta Faucet Co., which feature a high-arc spout, temperature control knob and high-temperature limit stop, which reduces the risk of scalding.

While one vanity featured a traditional oval mirror above it, the other sported the MiraVision Mirror TV from Philips Electronics. “It’s a mirror until you click the button. Then it becomes a television that you can watch from the tub,” remarks Barnett.

For those who have eagerly awaited the high-tech home of the future, with this home, that time has finally arrived.