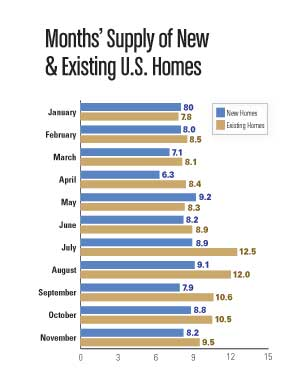 The New Year is underway, amid growing evidence of a modest recovery in 2011 for both the housing and the kitchen/bath markets. Among the key statistics and forecasts released by government agencies, research firms and industry-related trade associations in recent weeks were the following:

Home builders are reporting that they are “starting to see more buyers who are seriously considering a new-home purchase,” a development that “bodes well for what the future may hold,” according to the National Association of Home Builders. “The extremely low inventory of new homes on the market is also a positive sign that builders have been exercising tremendous caution with regard to new construction activity,” said NAHB Chief Economist David Crowe.

The Washington, DC-based NAHB cautioned, however, that “unless builders’ access to financing for new development improves, many will not have a product to sell when the opportunity arises, which would slow a recovery.”

Pending sales of existing homes are pointing to a gradual recovery for housing in 2011, according to the National Association of Realtors. Lawrence Yun, chief economist for the Washington, DC-based NAR, said that historically high housing affordability is boosting sales activity, while steady improvements in the economy are helping bring buyers into the market.

Yun noted, however, that further gains are needed for the housing market to reach normal levels of sales activity. “Credit remains tight, but if lenders return to more normal, safe underwriting standards for creditworthy buyers, there would be a bigger boost to the housing market,” Yun said.

Domestic shipments of major home appliances reversed their recent monthly downturn and continued to post modest year-to-date gains through November 2010, according to the Association of Home Appliance Manufacturers. The Washington, DC-based AHAM reported last month that year-to-date shipments through November, 2010 totaled 56.54 million units, up 3% from the 54.88 million units shipped during the same 11-month period in 2009. The most notable gains were posted for gas cooking appliances and food preservation products, AHAM said.

Sales of kitchen cabinets and bathroom vanities declined in November, 2010 compared to the same month a year earlier, the Kitchen Cabinet Manufacturers Association said last month. According to the Reston, VA-based KCMA, manufacturers participating in the association’s monthly “Trend of Business” survey reported that overall cabinet sales fell 4.1% in November, compared to November of 2009. Sales of stock cabinets declined 8.8%, while semicustom sales gained 1.4% and custom cabinet sales fell 6.0%, the KCMA reported. YTD sales through the first 11 months of 2010 were down 3.0% compared to the January-November period of 2009, the KCMA added.

Home Builders Seen in Deep Hole
Due to Downturn, Past Over-Building

Washington, DC — Annual single-family housing production in 2008 and 2009 fell about one million units short of the housing that would be needed in a normally functioning economy, suggesting that builders “will have a lot of catching up to do” as the economy improves and household formations return to trend levels, according to a new study by the National Association of Home Builders.

The study finds that there was an excessive amount of single-family building from 2003 through 2005, but overbuilding largely ended by 2006. The subsequent downturn was severe enough to more than offset those annual surpluses, according to the Washington, DC-based NAHB, which noted that 2010 is likely to add to the growing deficit of single-family homes by another one million units.

“The single-family housing market in the U.S. currently finds itself in a significantly under-built state,” said NAHB Chairman Bob Jones. “Pent-up demand for housing will at some point need to be worked off, pushing single-family production in a positive direction. In the meantime, the deficit continues to grow as builders remain cut off from the credit they need to begin developing and building new housing.”

Single-family building permits plunged to a trough of 441,000 in 2009, their lowest level since World War II, the NAHB reported. Adding to the magnitude of the recent downturn, multifamily starts and permits in 2009 fell below 150,000 units, an historic low, compared to about 400,000 units annually during the early 1980s.