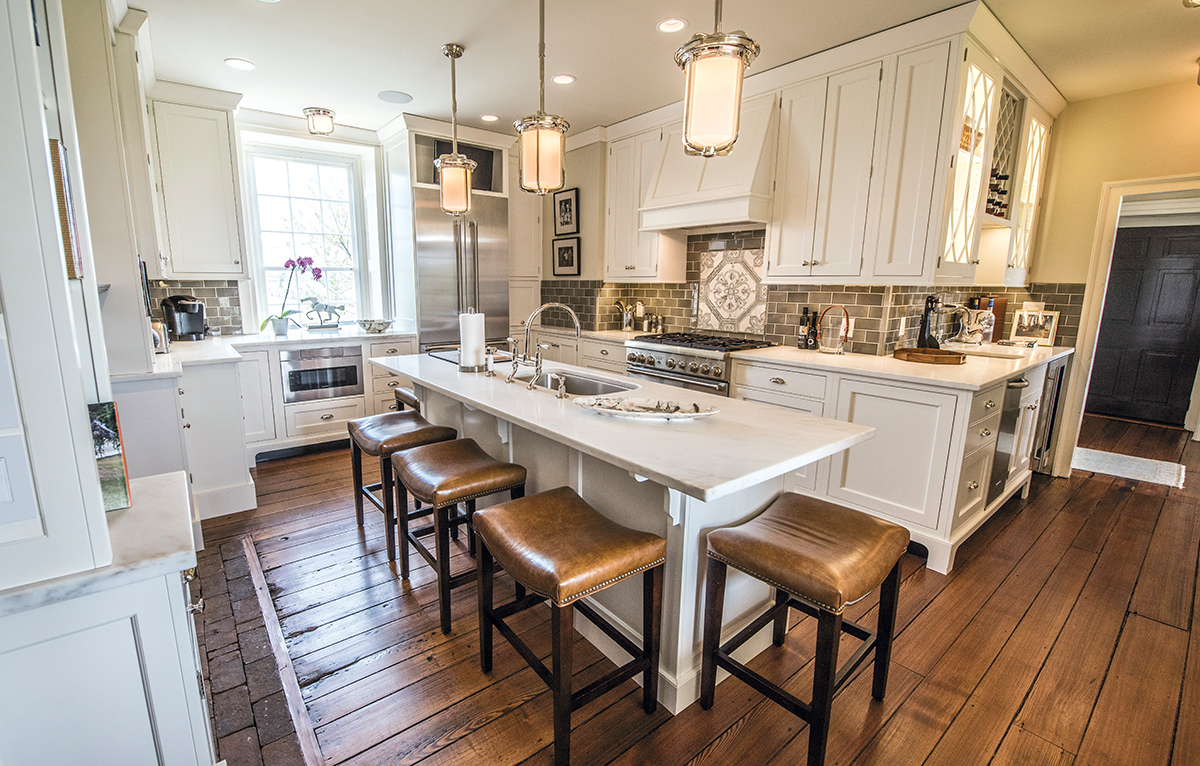 This historic, small kitchen in Georgetown, KY, was located in the “left rear” section of a mansion built in the 1800s on a thoroughbred farm. While the owners wanted an updated and improved kitchen layout, they didn’t want to take away from the house’s history.

The main objective for Lynn Pedigo of Lexington, KY-based Pedigo Design was to create a gourmet kitchen that would include an island for seating and a bar area, all while working around the home’s historic elements. Pedigo also wanted to retain the traditional feel of the kitchen to honor the historic atmosphere of the farm, the horses and the view. Good circulation was key, since most of the time would be spent in the kitchen and a connected side porch that led to the main house. Challenges in reorganizing the layout included working with the solid stone 18″-thick walls, as well as the existing window and door locations. The kitchen also had an original fireplace that had been cemented in, limiting the island’s depth. A sagging ceiling also had to be leveled out by adding drywall and additional support. Pedigo was able to get the desired island in using the minimum dimensions between the range wall front and the island front. The client requested bookcases, so Pedigo installed them on each side of the fireplace as a way to frame the mantle for clearance between the fireplace and the seating side of the island. Custom-depth base cabinets were included at the wall of the fireplace to provide added storage and a coffee station. The television was relocated so it could be seen from the island and also be hidden when necessary. The main sink (the client requested two) and dishwasher were placed in the island, which included seating for five with a 10″ overhang. Both ends of the island were used for seating, and the island sink was centered opposite the 36″ professional range. A mixture of recessed cans and pendants, flush-mount fixtures in cabinets and undercabinet LED lighting was used. The original ash wood wide-plank floor was salvaged by sanding and staining it in a warm medium tone. The final touch was a custom fireplace screen made by a local craftsman.