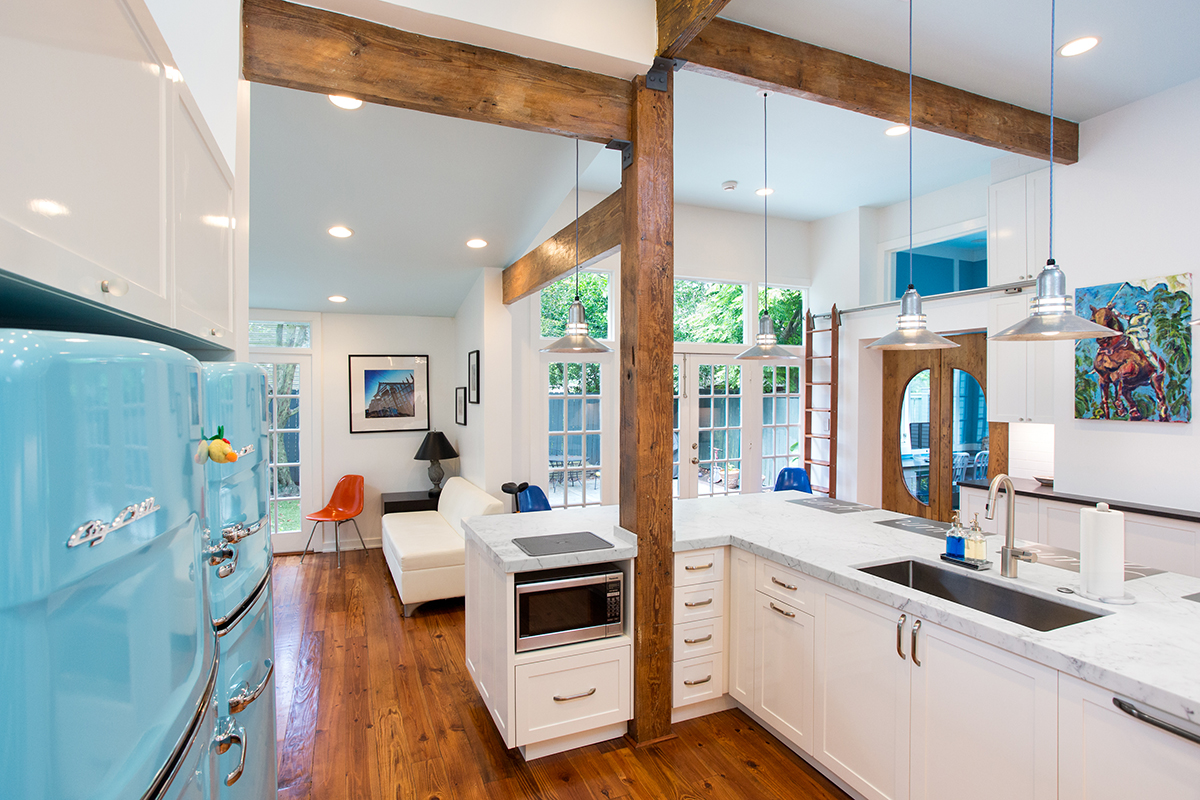 The crowded and poorly laid out floorplan of this New Orleans historic home was a combination of its age and the multiple, mismatched renovations it had received over the years. Despite the fact that the house was large, most of the main floor was tight and confusing.

The main priority for Ursula Emery McClure, Michael McClure, Garrett Armentor and Sarah Young of Lafayette, LA-based emerymcclure architecture was to create an open main floor that would be inviting for the family and their guests. Additionally, they were tasked with creating a space that would accommodate all of the activities in the family’s busy lives, including entertaining guests, eating, cooking, doing homework, glitter crafts for Mardi Gras krewes (since the house was on a parade route) and built-in crates for rescue dogs to sleep in, as the owner is a veterinarian.

The design team decided to centralize activity around a 10′ marble kitchen island. However, the project was not without its challenges. The 127-year-old house had gone through many different renovations, which had resulted in a segmented, cramped and dark space. Opening up the main floor was the goal, but the space that needed to be renovated had several load-bearing walls as well as multiple ceiling structures at various levels. On top of this, the family decided to remain in the house during construction, using a makeshift kitchen.

In order to achieve their goal, the emerymcclure team employed two strategies: First, they reframed and reopened the axis of the house, bringing in more light and creating a real entry foyer connecting all parts of the main floor. Second, they created a new structural element that allowed for the removal of all partition walls and, using reclaimed timbers, a tree column with four staggered branch beams was implemented to support upper floors, outline the four quadrants of the new living area and engage the marble island, the apex of it all.

The 12′ ceilings allowed for two sets of upper cabinetry to maximize storage space and, in order to be able to access these cabinets, a rolling ladder was installed. Reclaimed doors from the Caffin Theatre, an old movie house, served to create a separate office/homework area, while an upper level transom and full corner windows brought light from this area into the main space.