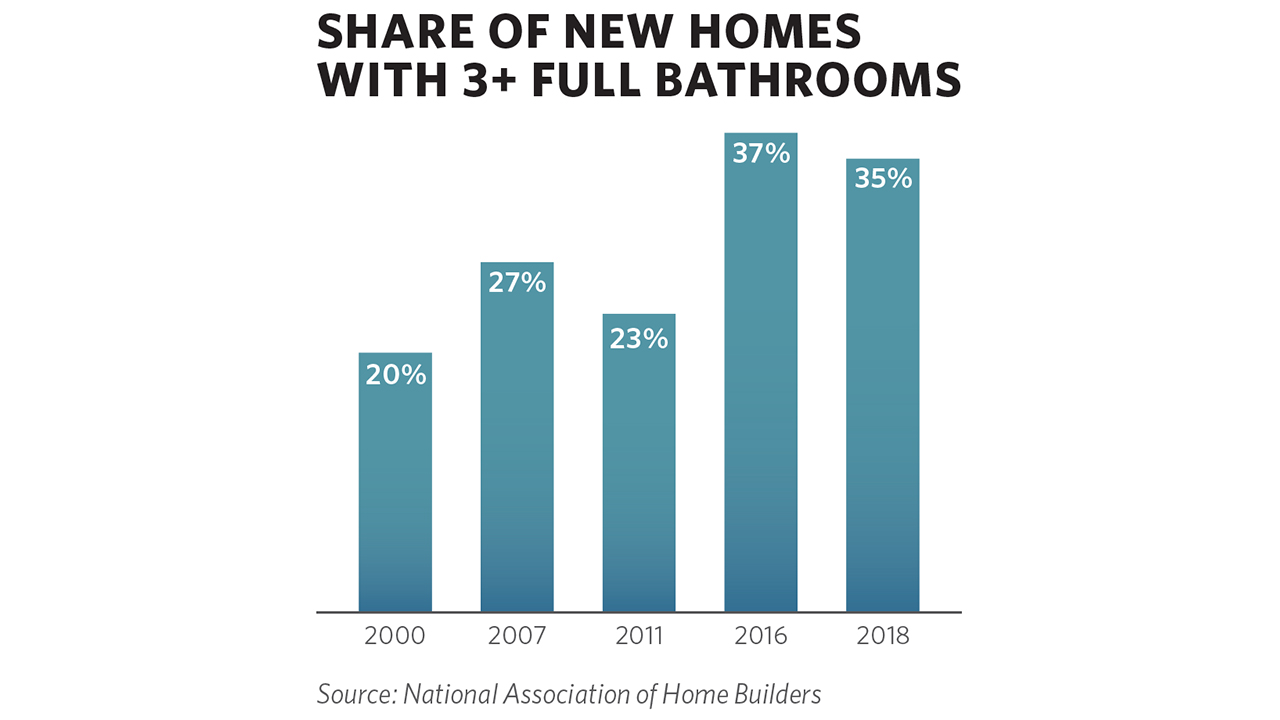 LAS VEGAS — The nation’s new-construction market is seeing a continued decline in the average size of new homes, coupled with decreased demand for upscale features, including multiple bathrooms, according to the results of a new survey conducted by the National Association of Home Builders.

The survey, whose results were released at the International Builders’ Show (IBS) here in February, found that the average new home declined to 2,576 sq. feet – down from a peak of 2,689 sq. ft. in 2015 – driven in part by increased production in townhouses, which comprised 14% of new home starts last year. Home sizes had increased for six consecutive years, but have been downsizing since 2016. Fewer have four or more bedrooms, or three or more bathrooms, the Washington, DC-based NAHB said (see graphic above).

“Townhomes take up less land, and that automatically brings the price down,” Quint noted.

The NAHB, Quint said, surveyed nearly 4,000 home buyers – those who have either recently purchased a home or plan to purchase a home within the next three years – ranking 175 features based on how essential they are to a home-purchasing decision. The top 10 features include laundry rooms and energy-saving features such as “Energy Star” appliances. Also in high demand are a variety of home-storage needs – such as garage storage and walk-in pantries –
as well as hardwood flooring, a patio and exterior lighting.

The survey results, said Quint, demonstrate “that builders are trying to respond to the crisis around housing affordability (see related Barometers).

Among the survey’s other findings are that 86% of home buyers prefer their kitchen and dining room to be completely or partially open. Top finishes include stainless steel appliances (67%), granite or natural stone kitchen countertops (57%) and white kitchen cabinetry (32%).

“White upon white is the new style that’s emerging, as well as gray on white – both for the kitchen and the bathroom – in terms of cabinets and countertops,” Nino Sitchinava, principal economist at Houzz, told reporters at the IBS (see related story).

Other rising trends, according to Quint and Sitchinava, include farmhouse styles incorporating ample amounts of wood; engineered quartz countertops for color flexibility; vinyl and resilient flooring, especially for aging in place; wireless controls; open interior and exterior spaces in the kitchen, and higher-end fixture installations in the bathroom, such as wall-mounted sinks, faucets and toilets. ▪