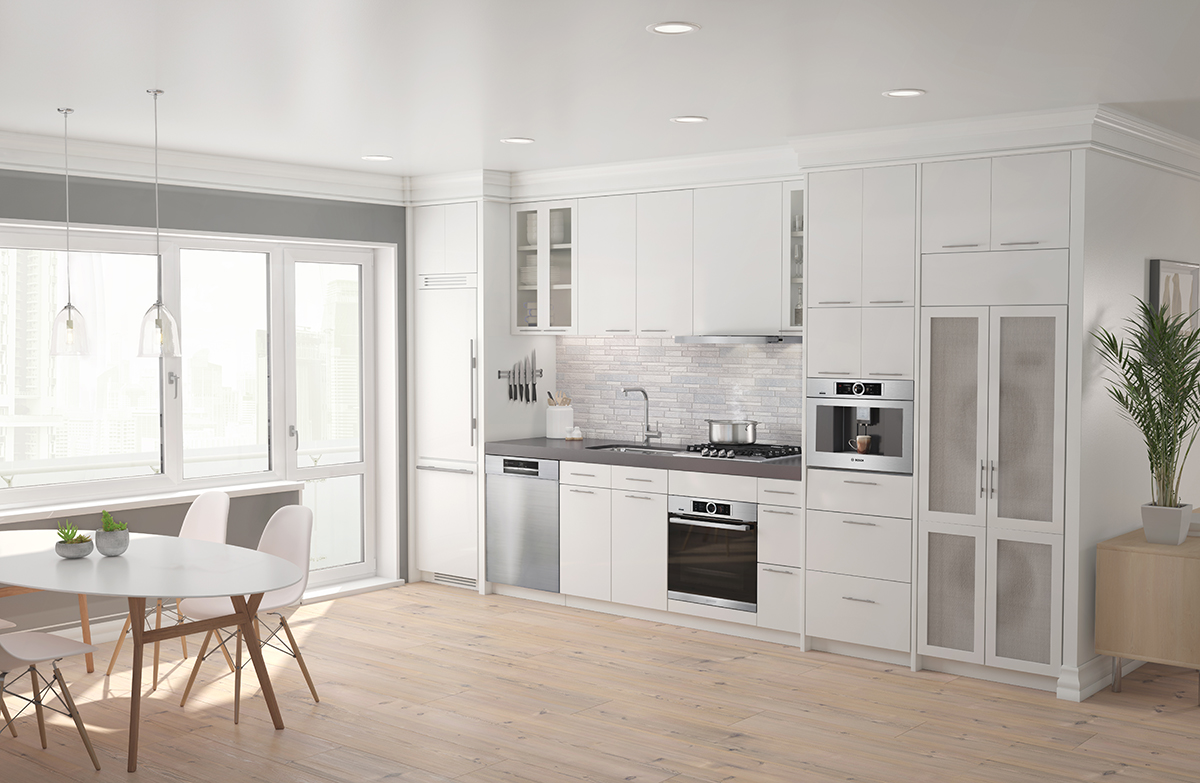 Bosch showed off its uber-sleek Home Connect suite at CES.

In the not too distant past, CES was known as the Consumer Electronics Show and its vast expanse was filled mainly with gear heads, geeks and global brands wanting to seduce them with the newest, sexiest boy toys. There are still plenty of all four, but the show has grown up to embrace the more shall-we-say-mature realm of home appliances and fixtures.

You’ll still see the Samsungs and LGs, for sure, but they’re showing off kitchen and laundry appliances along with their TVs, smartphones and tablets. And they’re connecting as many of those appliances to as many of their other devices as possible in what’s being referred to as a ‘smart home ecosystem.’

The smart home ecosystem promises a seamless reality where your connected home knows when you’re approaching, automatically disarms the security system, turns on the lights, starts your favorite music and has already cooked a meal with ingredients you ordered from your phone.

The technology exists to achieve this – and more – today. But just as we’ve seen in other realms (think Mac vs. Windows, Apple iOS vs. Android, etc.), there are competing and emerging standards to consider, and the connections aren’t universally fluent or hospitable.

Much of the innovation is phone-based, but voice control via Amazon’s Echo and emerging devices has had a huge impact, including in the kitchen and bath sphere. It could end up with the voice control modules becoming the default home tool and smartphones handling the away functions.

All of the standards, choices and connections can be somewhat daunting to an already busy designer, contractor or builder who might end up specifying standards for an entire home by default, not just the kitchen or bath being remodeled. That can limit or empower other choices that a homeowner may want to make in the future. They’re turning to you for expertise on appliances and fixtures in an increasingly connected, rapidly changing environment.

Fortunately, there are pros as savvy about this technology as your plumber is with pipes and your electrician with wiring. You’re probably going to be teaming with one or more on projects going forward, especially as more millennials become homeowners. Put another way, you probably should.

Yes, it’s the millennials who are driving the smart home trend; they expect these features in new home construction and also expect it to be upgradable for future needs. This massive generation – the largest in the country now – ranks 12 points higher than the general public in smart home adoption, according to GfK, a marketing research company.

Millennials want life to be easy, and automating chores is one of the areas they want simplified. They’re also the most willing to trade privacy for features and benefits. Wellness, sustainability and organization are also strong drivers for this group, while safety and security ranked first for Gen X and saving on utilities was tops for boomers. Manufacturers and builders are definitely paying attention to all of these generational shifts. Are you?

GfK believes smart appliances haven’t really taken off yet because there’s been a lack of convincing benefits. Manufacturers are working on changing that, but in some respects, the technology still lags the potential. For example, some of the new refrigerators on the show floor have interior cameras that show you if there’s no carton of milk on the shelf, but not if you’re out of ice cream, as there’s no camera on the freezer side yet. Some will tell you when the food inside the fridge expires, which is a tremendous feature – except that you have to enter the information for each item manually, which is the exact opposite of simplifying the grocery chore.

There were definitely some innovations, appliances and fixtures that could potentially meet some of the millennials’ criteria. Here are a few:

This brings up one of the major smart home trends at CES: Online shopping partnerships. In ancient mythology, Amazons were fierce women warriors. In modern times, Amazon is a fierce corporate warrior, slaying local merchants and crippling national chains. Its virtual presence far exceeded its physical footprint at the show, as almost every appliance brand and device maker that offered online ordering partnered with them. While this might make simplicity-seeking millennials happy on one level, it has the potential to reduce neighborhood grocery shopping convenience for all of us, which is not necessarily the healthiest outcome for our society. ▪