Housing Stagnant, Though Growth is Foreseen 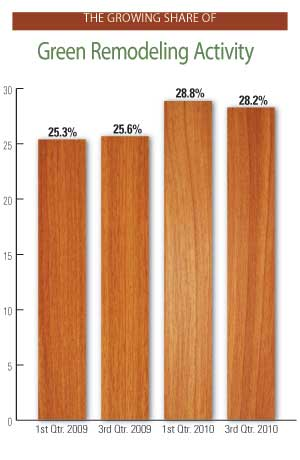 The nation’s housing market remains hamstrung by tepid consumer confidence and widespread uncertainty about the economy, although messages of optimism are being conveyed by some analysts. Among the key statistics and forecasts released by government agencies, research firms and industry-related trade associations in recent weeks were the following:

HOUSING STARTS
U.S. housing production is expected to exhibit modest improvement through the end of this year, “particularly in select markets that do not have large inventories of distressed homes and where economic stability is more apparent,” the chief economist for the National Association of Home Builders said last month (see related story, boxed below, right). David Crowe and other analysts at the Washington, DC-based NAHB noted, however, that both builders and buyers continue to exercise caution due to uncertainty about the economic climate, the large number of foreclosed homes, and concerns about access to credit. The latest housing figures – attributed to a moderate decline in single-family housing production coupled with a surge in multi-family projects due to higher demand for rental units – are being seen as “an indication of relative stability,” the NAHB said.

EXISTING-HOME SALES
There is currently a “tug and pull” on the nation’s housing market, the chief economist for the National Association of Realtors said last month. “Affordability conditions this year have been the most favorable on record dating back to 1970, but many buyers are being held back because banks are offering financing to only the most highly qualified borrowers, ignoring a large share of otherwise credit-worthy buyers,” said Lawrence Yun of the Washington, DC-based NAR. “Those potential buyers represent the difference between an uneven recovery and a much more robust housing market that could stimulate additional economic activity and create jobs.” The housing market “can easily move into a healthy expansion if mortgage underwriting standards return to normalcy,” Yun said, noting that pending home sales remain well above year-ago levels.

CABINET & VANITY SALES
Sales of kitchen cabinets and bathroom vanities declined once again in July, the Kitchen Cabinet Manufacturers Association said last month. According to the Reston, VA-based KCMA, manufacturers participating in the association’s monthly “Trend of Business” survey reported that overall cabinet sales fell 2.8% for the month, compared to July of 2010. Sales of stock cabinets declined 0.2%, while semi-custom sales dipped 5.1% and custom cabinet sales declined 3.5%, the KCMA reported. Year-to-date sales through July were down 3.4% from the January-July period of 2010.

Washington, DC — The nation’s housing market, decimated by the slumping economy and the lingering credit crisis, is expected to show renewed signs of life in 2012 and 2013, the National Association of Home Builders predicted last month.