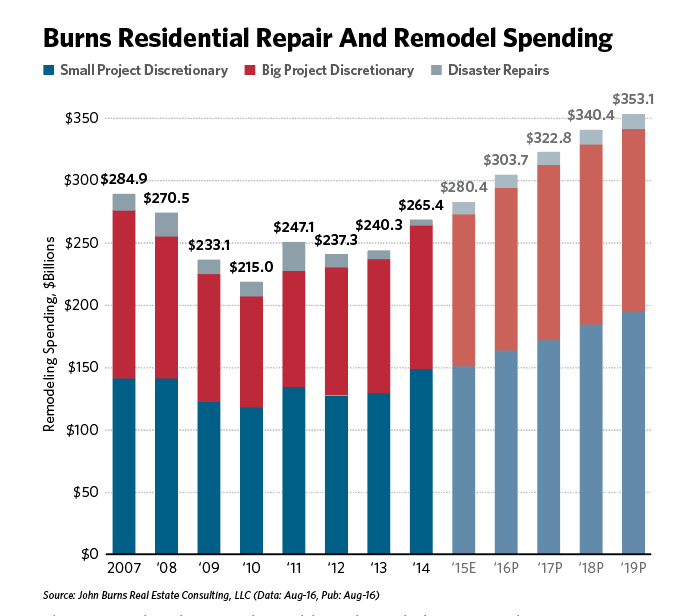 Gross domestic product (GDP), household incomes, home equity, consumer confidence, existing-home sales and mobility are all headed upward. That is the consensus of several economists and full-time industry observers Kitchen & Bath Design News interviewed early last month. The only real questions: How much will the market grow, and for how long?

Todd Tomalak, a remodeling industry analyst with John Burns Real Estate Consulting, is perhaps the most bullish. Driven in part by gains in big-project remodeling activity over the next two years, his forecast projects 24% growth in overall remodeling by the end of 2019. According to the forecast, big-project remodeling – of which kitchen and bath design is a major part – will have grown by 8% in 2016, and by 6% this coming year, 2017. But it is also an unusual remodeling market, he says.

“Today’s remodeling and housing market is a bit different than those of the past,” says Tomalak. “It is constrained by low supplies of homes amidst strong demand. So we have lower home sales, while at the same time we have home-price appreciation, we see credit loosening and we see income growth.

“As far as kitchen and bath remodeling goes, we know that people who stay in their homes longer-term – nesters with 10-plus years in their home – might do fewer projects than recent movers, but they spend a lot more when they do.”

It stands to reason, then, that of the 6% gain in big-project activity forecasted among owner-occupied households, only 1% of the gain will be attributable to a greater number of projects. Fully 5% of the gain will come from higher spending per project, the Burns forecast predicts (see related Trend Spotting, Looking Ahead: What’s Trending for 2017).

Harvard University’s Joint Center for Housing Studies is also bullish on remodeling spending in 2017. Its Leading Indicator of Remodeling Activity is suggesting a 7.7% increase in overall remodeling this year, very near Burns’ overall forecast (big remodels as well as small projects) of 8.3%. Harvard’s Kermit Baker, who also serves as chief economist for the American Institute of Architects (AIA), credits income growth and rising levels of home equity due to price gains.

“In terms of our LIRA, we expect pretty healthy growth in the overall market in 2017,” notes Baker. “I think that is driven by continued strengthening in home values. One of the major home-price indexes recently showed that home prices nationally have returned to pre-downturn highs. This suggests that most homeowners are pretty comfortable with the value of their homes. They have a fair amount of equity to protect. And secondly, they have some equity to tap into if they want to finance those projects.”

New-home activity may also be a driver for professional kitchen and bath design services. According to Robert Deitz, chief economist at the National Association of Home Builders, growth in single-family new construction, which remains at only 60% of previous sustainable levels, will rise in 2017. It is estimated that 775,000 single-family homes were built in 2016, and NAHB is forecasting another 850,000 in 2017. But there is a long way to get back to the 1.3 million level that is consistent with long-term norms, says Dietz.

“There are sectors, and home building is the most important of them, that are still operating at below-normal levels. For example, multifamily is above normal levels of activity. It rebounded after the recession and it operated at elevated levels due to the surge in rental demand. The level of new single-family construction is consistent with the level you might expect with the base need to replace older housing.”

A good percentage of the new homes in 2017 will be targeted toward first-time buyers, while higher-end custom building will hold its own, notes Dietz. This is primarily due to the demographic shifts playing out in both new construction and remodeling. The giant boomer generation still dominates the higher end, while millennials – whose median age is only 26 – are just entering the prime age where they will be expected to buy homes. In the middle are Generation X, those in their late 30s on up to their late 40s, which are fewer in number. Gen Xers are not moving up consistent with previous generations.

“The housing market is a ladder,” explains Dietz. “The initial rungs are typically renters, then moving to a starter home. The peak count of millennials are ages 25 and 26. As they move closer to the home-buying age, which is slightly above age 30, we are going to see significant upticks in demand in the starter market homes. This is good for remodelers as well, because over the next few years we are going to see an increase in existing-home sales and mobility. Those are all trigger events. There are a lot of really positive demographic factors that should help sustain and grow remodeling and home building.”

John Burns, founder of the Irvine, CA-based housing analytics firm that bears his name, recently wrote a book about housing demographics, Big Shifts Ahead, and he agrees that boomers and millennials are driving the trends. That is because Gen Xers, those born in the late ’60s and throughout the ’70s, who would otherwise be driving the market at this point, were hurt the worst by the 2008 housing collapse, says Burns.

“Those born in the 1970s are 37 to 46 years old today. That is your traditional move-up buyer. That buyer is smaller in numbers than the prior generation and suffered more than any other generation during the great recession,” Burns explains. “They started their families in the early 2000s, so they needed to buy a house in the early 2000s. They were the ones who by far got hit the hardest with foreclosures. And, if they are still lucky enough to own their homes, they do not have a lot of equity in it. Or they got foreclosed out.”

Kitchen and bath designers with a large clientele who were born in the 1950s and early 1960s will benefit the most in 2017. These are workaholics, says Burns, who number 41 million people and who have about $18 trillion in wealth to tap. They are not doing what previous generations have done at their age – moving to Florida and playing golf. They are working longer. They are focused on health and fitness. And they are staying in their homes longer.

Danielle Hale, director of housing research at the National Association of Realtors, sees demographic drivers in 2017 similarly. “Baby boomers are getting to an age where they will be transitioning, perhaps downsizing or maybe doing some remodeling, as they think about aging in place. The challenge is that some of your Gen X buyers have not recovered well from the housing recession. So they might not be in a position, where normally they would be trading up and expanding their families.”

Even young doctors and lawyers, those with very bankable future credit ratings, have come to rely on new, alternative financing mechanisms to get into the homes of their dreams or to embark on the remodeling project of their dreams, notes Burns’ colleague Tomalak. SoFi, a fast-growing technology-based lender, is one example of a firm that is offering young people with advanced degrees the loan amounts and the terms they need because their credit scores are lower or non-existent.

“The strength of the market so far has really been on the upper end, folks that have access to credit, mostly older households that were buying more expensive homes,” says Harvard’s Baker. “So I think the next leg of this recovery is getting millennials into home ownership and more marginal households – marginal in terms of their credit rating – into homeownership.”

It is expected that the Federal Reserve will have raised interest rates – perhaps by as much as a quarter of a percentage point – at the end of 2016. Two or three more increases are expected in the year ahead. This tends to dampen cash-out refinance activity. But the real impact in terms of higher mortgage interest rates began last fall as traders bid up 10-year bonds. This happened as the economy showed more strength, unemployment fell to 4.6%, making it all but certain that the Fed’s multiyear effort to spur the economy with low rates had finally come to an end.

In addition to rising interest rates, there is also a question about how long the current economic expansion could possibly last. The U.S. economy is entering its eighth consecutive year of growth, making it “the fourth longest expansion since the Civil War,” says Dietz. And, though 2017 is set for strong kitchen and bath demand, there are questions about potential slowdowns in 2018 and 2019.

Baker says the fundamentals of housing and remodeling should be strong enough to withstand slowdowns in other sectors of the economy, but a broader market slowdown 24 months from now is not out of the question due to international weakness and trade concerns, he says.

The other continuing drag on remodeling and housing is the ongoing skilled labor shortage that is impacting nearly every metro area around the country. There are simply not enough people to keep up with the work. Experts agree that there are no quick fixes to this long-term structural problem.

There are potentially positive wildcards. NAHB’s Robert Dietz sees the clear signs of regulatory easing by the new Trump administration as having the equivalent effect of a tax cut on builders and remodelers.

Then there is the increasing likelihood of a massive infrastructure spending bill making its way through Congress in 2017, says NAR’s Hale.

“Our forecast for next year is pretty moderate GDP growth,” Hale explains, “but I think our next forecast release [which was expected to come out later in December] will probably bump that up a little bit.

“There is a lot of anticipation for the new administration. And some of the spending proposals – whether or not those get passed into law, but just the idea that they are being talked about – creates additional economic activity. So I think outlook for 2017 is pretty positive for overall economic growth.”