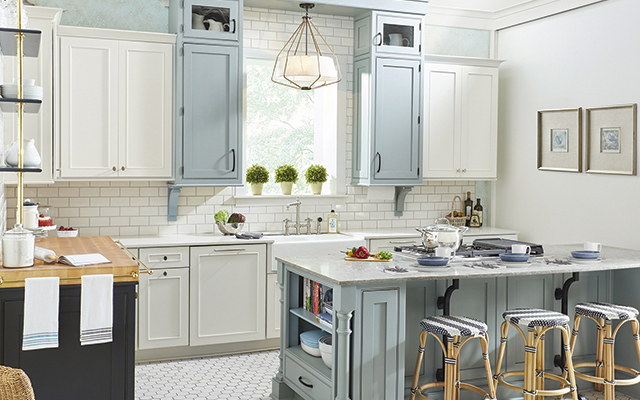 Nearly two-thirds of recently renovated kitchens included an island, while white cabinetry is a top choice among consumers, according to a new Houzz Kitchen Trends Study. Photo: Wellborn Cabinets

PALO ALTO, CA — Investments in kitchen remodeling continue to increase among homeowners, although the breadth of renovation is being scaled back due to rising product costs.

Results from the survey of nearly 2,600 U.S. homeowners revealed that median spending on major kitchen remodels completed in mid-2019 was $35,000, up 17% from a year earlier. But while many homeowners are opting for kitchen overhauls, the breadth of the renovations has been scaled back for the second year in a row, Houzz found. For example, upgrades to countertops and sinks are not as widespread compared with two years ago. Similarly, structural upgrades are not as frequent, including opening the kitchen to other interior rooms, changing the kitchen layout or adding square footage, Houzz reported.

“It’s remarkable to see median spending on kitchen remodels grow by double digits for the third year in a row,” said Nino Sitchinava, Houzz principal economist. “Combined with a two-year decline in the scope of kitchen remodels, spending increases confirm our findings of significant price inflation in the home remodeling industry due to changes in international trade policy.” Homeowners are dealing with increasing product prices “by substituting materials…highly impacted by tariffs on imported materials from China,” Sitchinava reported.