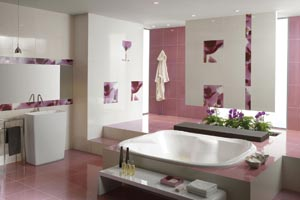 BOLOGNA, ITALY — America has always drawn inspiration and influence from its European counterparts in music, art and culture. Not surprisingly, then, this rings equally true for kitchen and bath design, as evidenced at the recent Cersaie, held here. Nearly 90,000 design industry professionals attended the 25th annual celebration of the world’s largest international exhibition of ceramic tiles and bathroom accessories.

Environmentally friendly products remained one of the hottest trends at the show, while metallic colors, wallpaper looks and textured patterns stood out at as well. Larger formats, unusual shapes and technological innovations also suggested upcoming trends soon to cross the Atlantic, according to kitchen and bath professionals in attendance.

A wide variety of size options are critical to allowing designers to create personalized spaces, and the tile options at year’s Cersaie clearly reflected this. Working with the “bigger is better” mentality, the exhibition offered a plethora of oversized formats throughout, including tiles that measured as large as 3m x 1m.

“The super-thin, oversized tiles introduced into the market several years ago were now shown at more booths and with more patterns and designs. These can be used for facing over cabinets or walls,” says Christine Abbate, spokesperson for Ceramic Tiles of Italy and principal of the Park Slope, NY-based Novita Communications.

One new product presented at this year’s show exhibited the excitement of the size phenomenon with a double-layer slab tile consisting of one layer of fiberglass between two 3.5 mm pieces of porcelain stoneware.

While the ordinary circles and squares were still in evidence, new shape options also emerged, including polygons, hexagonal shapes and more. Rectangles and squares conquered more territory than ever before, many with irregular variations of these shapes to create a more personalized feel. Indeed, whether creating optical effects or fitting together as a puzzle, it was obvious that the shape of the tile market is ever growing, again reflecting the desire for more custom looks.

The texture of surfaces seemed equally significant this year, with textural interest being a critical element of many of the most popular tile offerings. One surface trend consisted of imprinting linen, cotton and papyrus textures on tiles, which were then topped with a glazed “stitching” to complete the look.

Stratified, grid-like and some three-dimensional porcelain pieces offered another idea seen at the show. The ways of presenting these porcelain pieces built upon each other as one set of tiles used this idea and then incorporated satiny finishes on ribbed structures for the finished look.

Leather and animal skins proposed yet another texture trend, including cow, leopard and zebra tile prints, while more architectural options were presented as well. One set of tiles had three surface options, including one that took on the look and feel of rice paper. Another tile included a design which recalled a quilted finish – a look that several manufacturers displayed with designs that ran the gamut from classic ornate to modern contemporary.

The wallpaper look continued as a major surface trend this year as well, with everything from floral patterns to silhouettes created on ceramics and porcelains. Many tiles in evidence showcased motifs with floral arrangements, such as artistically placed rose buds, lilies, tulips and more. Silhouettes of these same flowers took on a variety of designs by adding additional colors, shapes and sizes to the mix.

One notable tile featured botanicals cast in tone-on-tone hues of gray and beige or black and white, while another design laid silhouetted foliage with detailed leaves in bas-relief. Incorporating green as more than just a sensibility, some manufacturers incorporated this color from the immediate natural source.

Many of the dreamy designs seen at this year’s Cersaie also recalled styles from the 1700s.

But even as some styles recalled centuries past, technology was ever present, reflecting the digital age we live in today. Evidence of this was seen in the various digital systems used to create unusual and personalized tile options. One such system produces clear, non-repetitive patterns extending from edge to edge, even on strong relief surfaces.

Another new technology transfers a wood-like texture and design onto a ceramic surface. This technology employs a machine which uses pigments and glaze stains for ceramics, and works like a digital printer to produce this look.
“Constant technological advances allow the Italians to create ever-more-realistic faux patterns, high-tech tile bodies which can be used indoors and out, in super-large and super-small formats to create breathtaking effects,” Abbate relates.

Color, too, did not go overlooked by manufacturers in 2008. The metallic look still exists, but the trend is toward a more golden hue. The finishes on display not only recalled gold in design and shade, but many tiles contained the metal itself. While this may seem a bit lavish for some American tastes, Abbate notes that the American market is never far behind when it comes to hot trends. “In the past, the U.S. market tended to be more conservative than the European marketplace – but to some extent, those days are over. An American taste for individual expression, color and pattern has opened the doors for a lot of Italian products,” she states.

An obvious trend toward eco-friendly kitchen and bath tiles carried throughout the four-day-long event. Widely celebrated during the show, these environmentally friendly styles included products produced with recycled content, LEED-compliant styles with textured finishes and glass mosaics produced from no less than 70% recycled materials.

“[The trend toward being environmentally responsible] is an important issue and has been in Italy for some time. The Italian ceramic tile industry is committed to the responsible production of ceramic tile. More manufacturers are consistently securing Ecolabels for their product lines because of the recycled content percentage or because of their production methods, techniques and materials,” concludes Abbate.