Job Market Proving to be Key Drag on Housing 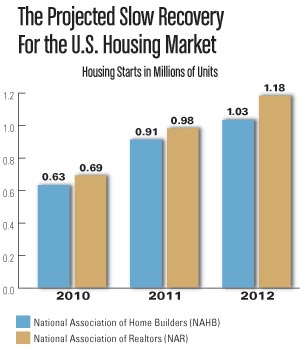 Consumer uncertainty and a stagnant job market continue to be major drags on housing, despite favorable affordability factors and house prices that seem to be stabilizing as 2010 winds down. Among the key statistics and forecasts released by government agencies, research firms and industry-related trade associations in recent weeks were the following:

HOUSING STARTS
The nation’s housing market remains in “a holding pattern,” as construction activity returned in late-summer to pre-home buyers’ tax credit levels, the National Association of Home Builders said last month. “Consumer uncertainty about the economy, the poor job market and the large number of foreclosed properties for sale continue to be a drag on housing,” said NAHB Chief Economist David Crowe – adding, however, that favorable home-buying conditions “should help spur additional demand as the job market gradually improves later this year.” The latest housing figures indicate that the pace of production is in line with the level of construction activity before the home-buyer tax credit temporarily stimulated housing sales, the NAHB said.

EXISTING-HOME SALES
The housing market “is trying to recover on its own power” without the aid of additional government stimulus, but a housing market recovery will likely be slow because of lingering economic uncertainty, the chief economist for the National Association of Realtors said last month. According to Lawrence Yun of the Washington, DC-based NAR, the current pace of existing-home sales demonstrates that home values “have shown stabilizing trends over the past year, even as the economy shed millions of jobs. [But] now that the economy is adding some jobs, the housing market needs to steadily improve and stand on its own,” Yun said.

CAST POLYMER DEMAND
U.S. demand for cast polymers is forecast to gain 5.4% annually through 2014, to 216 million sq. ft., according to The Freedonia Group, a Cleveland-based market research firm. A rebound in housing will be a key driver of growth, researchers said, adding that cast polymers will seize market share from traditional decorative surfacing materials such as laminate. Demand for engineered stone is forecast to gain 11% annually, to 53 million sq. ft. in 2014 – the fastest growth of any cast polymer product. Solid surface materials will continue to account for the largest share of demand for cast polymers, with 44% of the total market in 2014, Freedonia said, adding, however, that those materials are being forecast to have the slowest growth rate of all cast polymers.

CABINET & VANITY SALES
Sales of kitchen cabinets and bathroom vanities declined again in August compared to the same month a year earlier, the Kitchen Cabinet Manufacturers Association said last month. According to the Reston, VA-based KCMA, manufacturers participating in the association’s monthly “Trend of Business” survey reported that overall cabinet sales dipped 1.7% in August, compared to August of 2009. Sales of stock cabinets declined 5.6%, while semi-custom sales rose 4.3% and custom cabinet sales declined 10.9%, the KCMA reported. Year-to-date sales through the first eight months of 2010 were down 1.0% compared to the January-August period of 2009, the KCMA added.

Chicago — The nation’s housing market has been slow to recover and new construction is not likely to revert to long-term trends for several more years. At the same time, with households concerned about jobs and the current economic outlook, homes are getting smaller and are including fewer upscale features – although kitchens and baths are less affected than other spaces in the home.

According to Baker, who also serves as the chief economist for the American Institute of Architects, house price declines “have dramatically reduced owner equity levels and increased the number of distressed properties.

“Even as demand recovers,” he said, “inventory overhang [on the part of builders] limits the need for new homes [to be built].” In addition, Baker noted, declining mobility rates continue to dampen sales of existing homes, a key driver of residential remodeling activity.

On the plus side, Baker said, single-family home prices seem be stabilizing, after precipitous declines in recent years, while the inventory of foreclosed for-sale vacant homes is modestly improving and a remodeling industry recovery “appears to be underway and should pick up steam by the fourth quarter.”