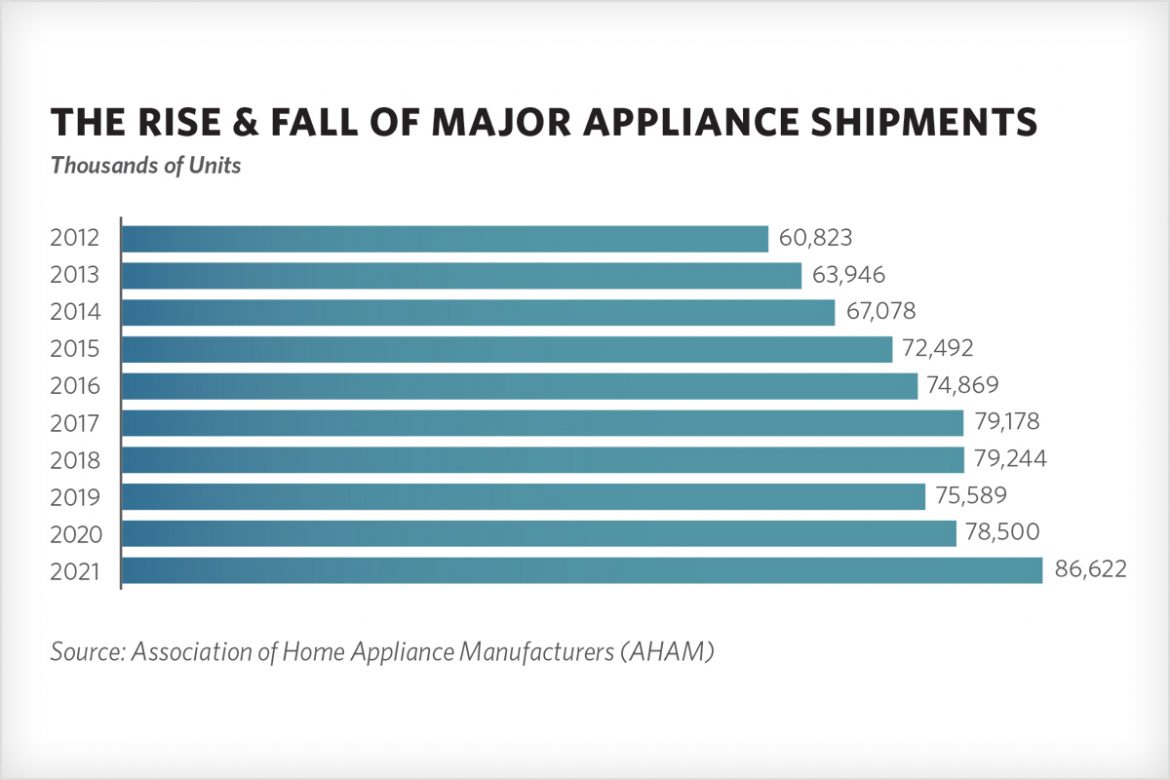 Growing headwinds continue to buffet the housing and residential remodeling sectors, with analysts predicting a slowdown in the months ahead, even as demand remains robust. Among the key statistics and forecasts released in recent weeks by government agencies, research firms and industry-related trade associations were the following:

The housing market should witness flat conditions for the balance of 2022, and a decline in 2023, as growing challenges in the form of higher mortgage rates, supply chain delays and steep hikes in building materials continue to worsen affordability conditions, according to the chief economist for the National Association of Home Builders. Citing a recent year-to-year dip in single-family housing permits, NAHB Chief Economist Robert Dietz said that rising mortgage rates and ongoing supply chain disruptions “continue to raise housing costs and take a toll on the housing market.” Recent builder surveys also reveal notably weaker confidence in the single-family market, the NAHB said.

Existing-home prices have surged for the better part of two years, including in the first quarter of 2022, but given the extremely low inventory of homes for sale, “appreciation should slow in the coming months,” according to the latest forecast by the National Association of Realtors. Lawrence Yun, chief economist for the Washington, DC-based NAR, said that his prediction was based on an expectation of  further supply in upcoming quarters, noting that the beginning of the first quarter registered a record-low amount of inventory. Yun said he also anticipates more pullback in housing demand as mortgage rates take a heavier toll on affordability. “Higher home prices and sharply higher mortgage rates have reduced buyer activity,” Yun observed, noting that pending home sales have declined in recent months and are at the slowest pace in nearly a decade. “It looks like more declines are imminent in the upcoming months,” said Yun, who forecasts existing-home sales to wane by 9% in 2022.

Buyers of new and existing homes spend thousands of dollars more on remodeling and furnishings in the first year after a purchase compared to non-moving homeowners, according to estimates by the National Association of Home Builders. NAHB’s latest estimates, based on pre-pandemic data from the Bureau of Labor Statistics, reveal that during the first year after purchase, a typical buyer of a newly built single-family detached home spends on average $9,250 more than a similar non-moving homeowner. Likewise, a buyer of an existing single-family detached home tends to spend about $5,240 more on remodeling, furnishings and appliances than a similar non-moving homeowner.

Sales of kitchen cabinets and bathroom vanities rose significantly in April, continuing a growth path that began last year and continued through the first quarter of 2022, the Kitchen Cabinet Manufacturers Association reported. According to the KCMA’s latest monthly Trend of Business Survey, participating cabinet manufacturers reported an increase in overall cabinet sales of 11.9% in April compared to April of 2021. Custom cabinet sales rose 11.7% over the same month last year, while sales of semi-custom cabinets gained 13.7% and stock cabinet sales were up 10.7%, the Reston, VA-based KCMA said.

NATIONAL HARBOR, MD — Two years after enduring the financial impact of COVID-19, and despite a recent robust housing market, “there are significant questions” regarding the market’s direction over the coming months, according to the chief economist for the National Association of Realtors.

While housing supply appears to be on the upswing, Yun said inflation will persist and “cause strain” for prospective home buyers. Other external factors will negatively impact the market, he noted.

“The Russia-Ukraine war and escalating fuel prices have contributed to further housing unaffordability for buyers,” Yun said, noting that purchasing a home is currently 55% more expensive than a year ago, while mortgage rates are up sharply, and inflation has risen to 8.5%.

Yun estimated that inflation will remain “elevated” for the next several months and that the market will see further monetary policy tightening through a series of rate hikes. Citing a five-month decline in pending home sales, as well as a drop in newly constructed single-nfamily sales, he predicted that the higher mortgage rates will slow the housing market.