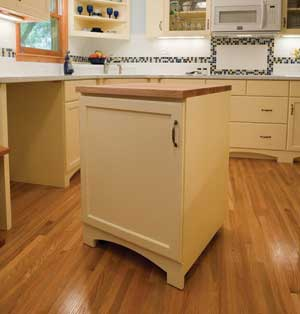 Today’s homeowners are more adamant than ever about what they want to incorporate into a remodeling project. The winners of Qualified Remodeler’s 2010 Master Design Awards in the kitchen and bath categories largely agree educating clients about what works and what doesn’t work is one of the many challenges facing remodelers.

Another challenge of homeowners’ I-want-what-I-want attitudes is they expect to stay in their homes indefinitely and seem less attuned to the impact of alterations on resale values, a contradiction to the return-on-investment remodeling theory.

Regardless, changes in consumer attitudes, including a heightened concern with getting more for less money, make the remodeler’s task as a consultant and his or her ability to tactfully compromise even more crucial today.

The Art of Compromise

Laura Orfield-Skrivseth, co-owner and designer/project manager with Orfield Design & Construction Inc., Bloomington, Minn., particularly relied on her team’s ability to compromise in their project that won Silver in the 2010 Master Design Awards’ Kitchens Below $50,000 category.

Most of the kitchen and bath category winners said they find compromises to give clients what they want without being detrimental to future homeowners’ comfort. Will Cole, owner of Design Destinations Inc., Houston, says: “There are times when the homeowner will have a ‘me’ attitude. That’s when we’ll provide guidance about the issues they’ll have if we build it according to their ideas. For example, we have a client who wants us to build a bathroom onto the backside of his kitchen while turning the existing hall bath into a laundry room. The hall bath services the three bedrooms, so I mentioned to him that it will be highly undesirable to have the kids walk through the kitchen to take a bath. We’re now looking at different ways we can get the bathroom into the existing floor plan.”

“We’ve been fortunate that our clients are not interested in a quick sale and, therefore, we’re not in business to flip homes,” says Greg Kraus, a designer with Otogawa-Anschel Design-Build LLC, Minneapolis. “However, we try to include the infrastructure for future needs whether that is roughed-in plumbing lines or chase ways for electrical updates.”

Despite wanting their own tastes integrated into their remodels, homeowners still are sensitive to connecting a new design with their home’s existing architecture. Tatiana Machado-Rosas, senior designer/design department head with Jackson Design & Remodeling, San Diego, received an Honorable Mention in the Kitchens Over $100,000 category for a renovation/addition to a home listed on the San Diego Historical Registry. The 10,000-square-foot house, which was built in the early 1900s, had a 150-square-foot kitchen that didn’t correlate in scale or character to the rest of the home. The homeowners wanted modern conveniences, but they didn’t want to compromise the home’s design integrity.

“I think people are paying a little more attention to the architecture of their homes,” she says. “Even in extensive remodels the design is cohesive between the inside and outside. Sometimes they have an idea of what style they want but they want to be sure the style will fit the house.”

Richard Bubnowski, owner of Richard Bubnowski Design LLC, Point Pleasant Beach, N.J., won Gold in the Bathrooms From $30,000 to $50,000 category for a project in which the homeowners were sensitive to their beach house’s early 20th century Shingle-style architecture. “A lot of the work we do is more transitional—something that ties in with the traditional architecture of the existing home but at the same time is considerably more modern but not cutting-edge modern,” Bubnowski notes.

The homeowners asked Bubnowski to redesign their tiny bathroom to meet their needs. The house is used during the summer months, which meant the homeowners only wanted a shower because it was more practical and space was limited. “I think it is kind of an urban myth that you need a bathtub somewhere in a house,” Bubnowski says. “Many of our clients don’t want it because they simply don’t have the time.”

Bubnowski said the beach-house owners didn’t want him to expand the bathroom by moving into adjacent rooms or adding outward, so he decided to go up into the attic space, raising a 7 1/2-foot ceiling to 9 1/2 feet and adding clerestory windows that are reminiscent of the home’s existing architecture. Bubnowski integrated the beach by specifying glass tile in a shade similar to sea glass while tying the new cabinetry into the home’s existing woodwork.

“Previously when people remodeled these Craftsman- or Shingle-style houses, they wanted to do something that was a direct translation of that style and now they want to get a little funky with it,” Bubnowski adds. “This project was a really good example of someone with a very traditional house who wanted to do something somewhat modern but respectfully tie it in with the existing architecture.”

The economy may be forcing homeowners to stay in their homes longer and, therefore, consider remodeling. However, the economy also is producing challenges for remodelers, namely the creation of a consumer who wants the luxury of yesteryear at rock-bottom prices. “People aren’t spending as freely as they did a few years ago, but they are going to do something and they want to really like it,” explains Joe Cracco, president of Modern Yankee Builders, Cumberland, R.I. “To cut costs, a lot of people are shopping at Home Depot and online to try to get bargains. In many cases, they’re buying cheap fixtures that barely make it out of the warranty period before failing.”

Cracco won Bronze in the Bathrooms Under $30,000 category with a project that had a tight budget yet needed a lot of structural work. He found cost savings by leaving parts of salvageable walls in place to minimize framing, plaster and finish work. He then could provide the homeowners with the fixtures and finishes they wanted. “This is something that is happening more often as people have less to spend,” he says. “I think they’re very tempted to cut corners, and I don’t mean just in materials. I think they’re more tempted to accept that low bid because they think ‘even if I have a bunch of problems, this bid is so low it’s probably still worth it.’”

All the kitchen winners say kitchens have become the most important room in the house in recent years, and that reflects homeowners’ decisions. “The kitchen is a multipurpose room,” Machado-Rosas says. “People are inviting friends and family over, and they want to be proud of what they have, including the appliances and finishes. They are going for a wow factor—not just improving the kitchen but really changing their lifestyle.”

In the case of Cole’s Bronze-winning project in the Kitchens Under $50,000 category, the homeowners wanted to improve the flow of their limited living space, so the living-room wall was removed and an island was added to allow cooks to interact with people in the living room. Cole has gone a step further in other kitchen projects: “In a number of kitchens, we put the refrigerators against heavy walls and the stove in the middle to make it open into the living area.”

This was the case in Tenhulzen’s Gold-winning project in the Kitchens Between $50,000 to $100,000 category. “We made this office part of the main living area. When the kids are doing homework and she’s preparing meals, he can be doing his work, or she can be paying bills while he’s cooking. Now we’re seeing a trend of having that home-office/mail-sorting/e-mail-checking/recipe-searching space coming back.”

The winners of the 2010 Master Design Awards’ bathroom categories echo the kitchen winners in that homeowners tend to be interested in making bathrooms fit their needs for right now, which often results in removal of the traditional bathtub.

Bubnowski notes a bathtub was impractical and took up too much space in his winning project and adds he is less likely to design traditional tub/shower combination units into any of his projects. Mark Evans, project designer with CG&S Design/Build, Austin, Texas, attributes the disappearing tub to homeowners’ “me” attitudes. “At one time you had to have a bathtub in a master bath, but you don’t anymore,” he says. “Now homeowners are saying, ‘I want to take a shower, I want a lot of room’. They are making their homes more for them—whether that means walk-in showers, bathing pods with tubs and showers, or something else.”

Cracco also has noticed the demise of the traditional bathtub. “The 5-foot tub/shower combo unit in most cases is going away,” he says. “People are going one of two directions: They’re putting in a tiled shower only, or they are going the total luxury route with a tiled shower in combination with a large soaking tub. Those who choose the shower only commonly say they rarely use a tub or there’s a tub in another bathroom.”

Ultimately, each of the kitchen and bath winners notes that meeting the needs of today’s consumers requires them to be consultants. Homeowners want more of a remodeler’s time, have more questions and need more guidance to make appropriate choices. Most are appreciative of creating a relationship with their remodeler.

“People are coming to me as a professional. I’ve gone to school for this; I have experience; I manage these jobs; I design these jobs. If a homeowner doesn’t want to listen to a professional, it’s probably not a good fit for me,” Orfield-Skrivseth explains. “Fortunately, I don’t see that much. I see a lot of people who are trying to make things their own but still care about resale. Most are open to guidance and input as long as they feel they are being listened to and some of their ideas are incorporated. It’s about creating a lasting relationship.”