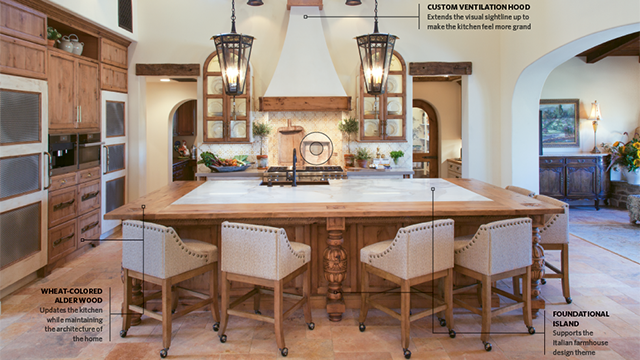 San Diego, CA — The architecture of this Italian farmhouse, which commingles beautifully with others like it as well as with Spanish haciendas and colonials in the award-winning Santaluz, is well-suited to its conservation-minded and master-planned community that emphasizes a special reverence for coastal California’s natural resources. However, aesthetically, its kitchen was more builder-grade than impressive and lacked any authenticity to the rustic farmhouse character, according to Leanne Michael, owner of the San Diego-based LUXE lifestyle design. Functionally, it didn’t match the bustling California lifestyle of its homeowners, who are also avid cooks and wine enthusiasts who love to entertain.

“The kitchen just wasn’t appropriate for the home,” she says. “Its architecture is beautifully appointed, so I wanted to preserve that feeling with a new, relevant kitchen. It was also important that my clients have enough space to entertain and still be involved with their guests while they are cooking.”

To fulfill those aspirations, Michael anchored the space with a 22′ island. Functionally, its significant size makes the most of the room’s relatively small footprint and enhances the cooking experience, allowing interaction with guests while entertaining.

“The kitchen is actually quite small for the size of the home,” she says, noting the need to work within the existing footprint.

Aesthetically, the island captures the home’s Italian vibe via a knotty alder wood base with an inlaid Calacatta Gold marble top. A 16″ wood counter surround on three sides serves as the bar/eating surface and maximizes the island’s size without seams.

“I really love the character of alder wood, especially for homes that have a rustic Spanish or Italian flavor,” she says. “It has the most amazing, beautiful and natural knots. A lot of cabinet makers fill the knots in, but I don’t. I want to see such incredible natural character.”

Michael often hand selects wood pieces, as she did with the alder used for the island legs. “I chose each one of those timbers so the openings of the knots would be visible,” she says. “The character of the wood is beautiful. As a semi-hard wood, alder ages and patinas over time with scratches, bumps and dings adding to its appeal.”

The designer fashioned the island to resemble an antique refectory table, taking inspiration from the 1920s-1940s. “I wanted it to feel like an antique piece of furniture,” she says. Michael purposefully eliminated any traditional cross bars in favor of needed stool space. “I could have had more of an overhang to accommodate both, but I didn’t feel you would see and appreciate the custom details on the apron,” she explains. “I needed to make a decision, and I felt the apron and carvings were far more distinctive and important than cross bars.”

Staining the alder a custom wheat hue, which is carried throughout the kitchen, further enhances the Italian farmhouse design theme while softening the effect of the home. “I wanted the kitchen to feel new and updated, but I didn’t want to take away from the character of the architecture of the home,” she notes. “I’m kind of a purist at heart. For me, a modern, all-white kitchen just wouldn’t have felt right here, regardless of current trends, so designing the space with a lighter color family updates the look while still being historically correct for the home.”

Michael also focused on improving the kitchen’s function and aesthetics by incorporating elements that encourage verticality to combat the kitchen’s relatively small footprint.

“I brought the visual sightline up the wall,” she says. “It fakes the eye and makes you feel like you are in a much grander space.”

One element that leads the eye up is the refrigerator wall, where the designer extended the cabinetry to a height of 10′. This gave the added benefit of providing extra storage, which was a concern and challenge for the original footprint. “With such high ceilings, it just made sense to address the storage needs and bring the sightline up,” she says. “Doing so also made the space feel far more significant, relevant and useful, besides being dramatic and appealing.”

Michael purposefully separated the Sub-Zero refrigerator and freezer columns, adding a Miele coffee station and steam oven between them. Underneath each, she included a pull-out Calacatta marble drawer that can serve as an additional counter surface. To add further interest, the designer accented the refrigerator and freezer with bronzed iron mesh metal screen. “Fridge units can be a bit utilitarian, but I made them a feature,” she states. “It gives the room more character compared to just a faux finish.”

Additional elements that encourage a vertical visual include the custom ventilation hood featuring hand-sculpted plaster and alder beams, the latter of which complement the reclaimed, hand-hewn/hand-selected timber beams on the adjacent doorways. Michael flanked each side of the hood with arched cabinets faced with alder and accented with bubble glass for a historical look. “I felt like there was enough ‘square’ going on,” she explains. “The arch softens the room and brings the eye up. Plus, the cabinets make a beautiful statement on the wall.”

Base cabinets with a custom faux finish flank the Wolf range and feature contrasting wheat-colored accents at each corner that complement the island legs. Michael topped the cabinets with Hazelwood quartz from M S International. Its tonal gray color plays a supporting role so other elements can shine, including the Tabarka Studio hand-painted backsplash tile that features soft gray and two shades of gold on an off-white base. To add interest, she laid it on the diagonal, leaving the edge live.

“I wanted the edge to be visually impressive,” she says. “It’s interesting and beautiful, and it softens the space. When guests walk in, they gravitate toward it.”

The diagonal pattern also creates a cross effect that ‘speaks’ to other elements throughout the space, including details such as the metal mesh on the refrigerator and freezer and the solid brass hardware for the arched cabinets, which feature hand-forged pulls in the shape of a mythological siren accented with a cross on her chest. “There are subtle hints that speak to each other, without looking purposed or contrived,” she notes. “I didn’t want the space to feel trendy. Instead, I wanted it to feel well collected over time.” ▪