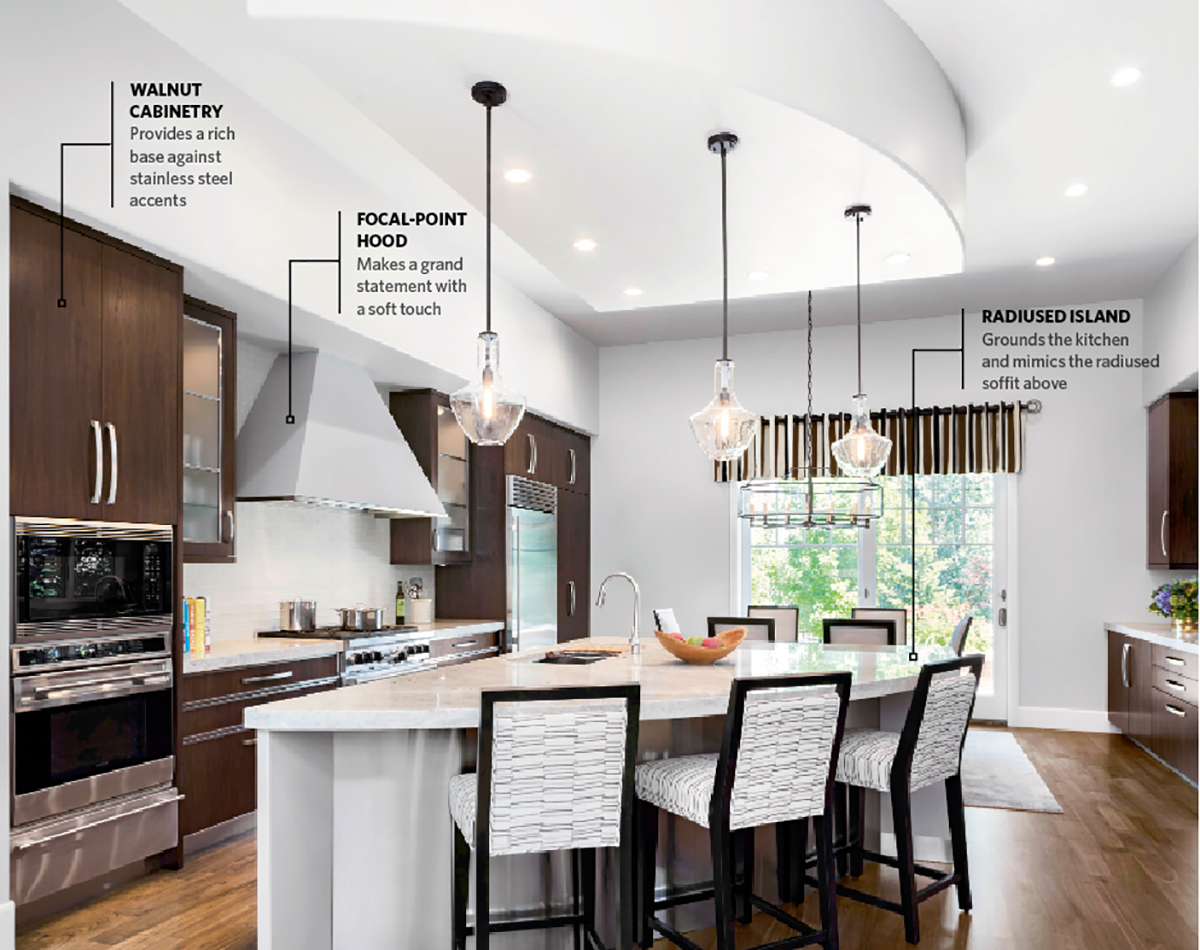 GREENWOOD VILLAGE, CO ­— Mikal Otten still remembers the first time he walked into this Greenwood Village, CO home, which serves as a second residence for his clients who had to remodel the kitchen because of damage caused by a water leak. The flooring and some cabinets had already been removed, leaving behind the skeletal framework from which he and interior designer Beth Armijo of Armijo Design Group could create a new space. The new design would focus on improved function and aesthetics as well as a better balance to complement the architecture.

“Those initial images are usually what push a design,” says the owner of Exquisite Kitchen Design in Denver, CO, who indicates those first glimpses emphasized the spec home’s rather nondescript former self. “It was a relatively new home, only about seven or eight years old, but the finishes and everything inside were basic and cheaply done.”

Additionally, the cabinetry only reached to about 8′, well short of the 11′-tall ceilings. “It looked like the kitchen was just thrown in,” he says, “and the design didn’t tie into the architecture whatsoever.”

To address some of the architectural issues, Otten added soffits above the cabinets along the cooking wall as well as in the bar area to connect with the soffit above the island.

“The island soffit was in the previous kitchen,” he explains. “We decided we wanted to keep it, but also update it.”

As such, he added three decorative Kichler pendants suspended from the centrally located soffit, hovering above the matching radiused island.

“Bringing the ceiling height down with the soffits keeps the eye at a decent height so the space isn’t so cavernous,” he explains. “It’s nice to have tall ceilings, but they can get out of control. The new soffits balance the space. I often think about the most comfortable spaces I am in, and their beauty is at eye level. To have to continually look up can be disconcerting.”

Eye-level details include the focal-point hearth and the bar, both of which capture attention depending upon the entry point into the kitchen. “When I design a space, I consider the entry areas,” he says. “When you walk into this kitchen from the front entry, you glance across the island and see the beautiful, contemporary hearth. From the garage entry on the opposite side, you have a different view…one where you glance across the island and rest your eyes on the bar. It’s important to find something that entices you into the space and welcomes you from each entry.”

Elements on the cooking wall include the Wolf range, which was original to the kitchen, and ventilation hood sheathed in a warm gray lacquer with stainless steel accents. “The hood is grand, while being soft,” says Otten. The backsplash, comprised of glass tile from Glasstints, adds a bit of texture and softness to the space.

Display cabinets to each side of the hood are illuminated with LED lights, and their frosted glass doors are framed with stainless steel to coordinate with the hood. Otten also framed the flat-cut walnut Premier Custom Built base cabinets – which feature a Hearthstone stain – with stainless steel accents. Utilizing the metal as a toe kick, as well as a façade for the island, pulls everything together.

“The hearth area, with its combination of stainless steel against dark, rich walnut, is a new interpretation that you don’t always see,” he says. “It adds such a fresh touch to the space. And since there is a lot of natural light, we were able to use the dark wood. The previous kitchen was a red cherry, but we decided to pull everything a bit more toward brown in the new kitchen. We landed on this rich walnut, which we lightened with the gray lacquer juxtaposed against it. The accents of stainless steel give a little extra punch.”

Otten completed the cooking wall with the original Sub-Zero refrigerator and Wolf wall oven and microwave, which were relocated to a more convenient height for his client. “We reconfigured this elevation for a better balance to the right and left of the beautiful, focal-point hood,” he adds.

On the opposite wall, Otten created a bar area that echoes many of the elements featured on the cooking wall. “The previous kitchen also included a bar, but it was rather boring,” says the designer. “This is the area that you see when you enter the kitchen from the garage, so we wanted elements that tied into the kitchen while softly calling attention to it.”

As such, Otten repeated the display cabinets with LED lights, stainless steel ‘frames’ and glass doors. The beverage cooler is balanced with stainless steel cabinets and a small bar sink is cut into the 2″-thick Madre Perla quartzite countertop. “The quartzite’s coloring, with its pale yellows and taupe-y grays against an ivory background, ties together the warm walnut with the cool steel,” he says.

The countertop’s waterfall edge adds a finishing detail, as does the partial wall element that extends from the ceiling to the countertop. “The wall detail finishes the cabinet run so it doesn’t just end at the side of the cabinet,” he states, noting that it also provides a separation between the drink mixing area and serving area.

Grounding the center of the space is the radiused island, which is painted in Plymouth Rock lacquer and accented with a stainless steel facade. It also includes plenty of seating as well as additional storage. “Every single cabinet has some sort of specialized storage,” he points out, calling attention to utensil dividers, spice storage, pot/pan storage, etc. “We included plenty of drawers and rollouts behind doors so we could make her new kitchen as functional and useful as possible.

“Overall, this is a great new space for my clients,” he continues, “classic and beautiful, without being too contrived or overdone. It’s a space you can really envision living in.” ▪