Kitchen Gets New Life and Light 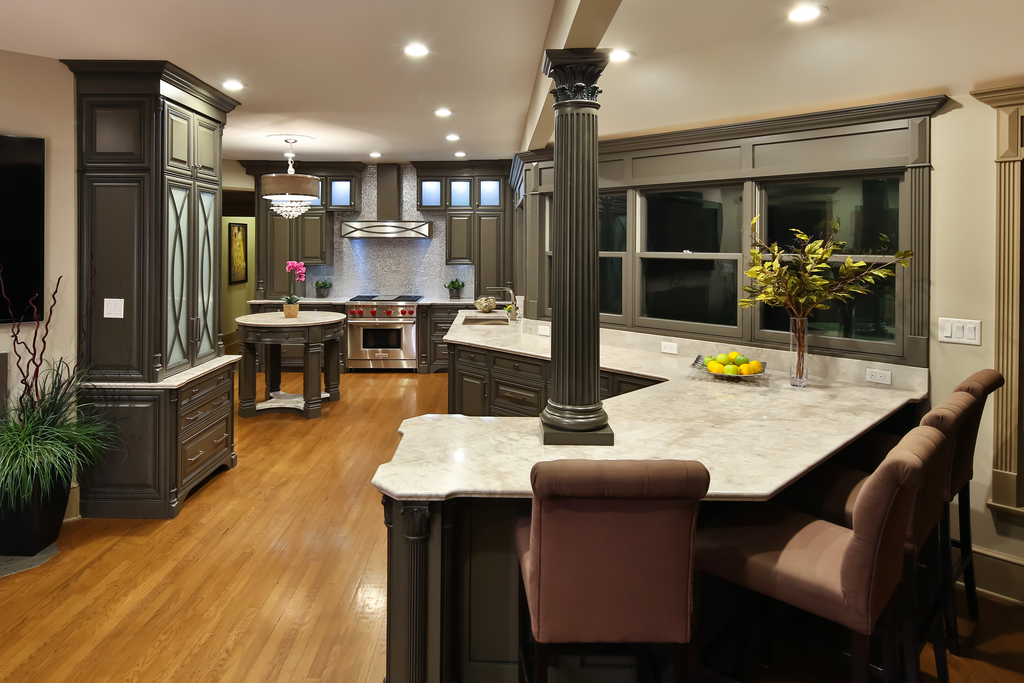 James Justice has learned a lot about design and remodeling in the 24 years since he built the home he shares with his wife, Darlene, and their family. The remodeler – who owns Architectural Justice in Medina, OH, with Darlene, who is a designer and creative director at the firm – had started the business six years earlier, crafting cabinetry in the family garage and building additions.

“I didn’t think about things like east facing glass,” he says in regards to the orientation of the home. “As a result, our kitchen just didn’t get any morning sun.”

On top of that, the cabinetry was in need of repair and storage was inefficient. “Because we’re in the business, our kitchen had a lot of used materials… stuff we had collected from other people’s homes,” he says.

Additionally, the eating area was small and the kitchen didn’t function adequately for entertaining. Plus, the entire space was dated aesthetically. “The grape wallpaper may have been in style back in the day, but it definitely had to go!” says Darlene, noting that the soffits and corner oven, which simply took up too much space, were added to that list as well. In the end, the only remnant of the previous kitchen is the 2.25” natural oak flooring that was refinished to a darker color.

The couple began the redesign by creating a triangular-shaped addition at the back of the house, which solves several transgressions of the previous space. Its wall of windows accomplishes the goal of bringing natural light into the space from east-facing windows and the additional square footage allows for a breakfast nook that features a curved peninsula and a larger dinette table to accommodate the family more comfortably. It also gives them better a better view of and access to their back and side yards.

“The addition has really enhanced the space,” says James. “The morning sun hits the nook before anything else.”

The addition also improved the functionality of the Great Room into which the kitchen and new breakfast nook open, allowing for a better arrangement of furniture to create a single focal point with the television and fireplace. A new entrance from the Great Room to the dining room makes it easier to entertain large groups.

The extra space provided by the addition allows the ‘after’ kitchen to shine, showcasing a transformation that focuses on timeless and stylish elements – with a layout that enhances functionality for the family that loves to cook.

“Our biggest challenge was figuring out the new peninsula,” notes James, who says its predecessor divided the kitchen from the Great Room and impeded traffic flow as well as conversation. “We spent a lot of hours designing it on paper.”

In the end, the new peninsula continues the line of cabinetry along the sink wall and curves into the breakfast nook, connecting the two spaces while allowing seating for four and conversation between the cook in the kitchen and guests in the Great Room. Its custom maple cabinetry – crafted by Architectural Justice’s on-site cabinetry shop – features a painted grey finish with black highlights. Clarity granite, custom cut by the firm’s on-site granite shop, provides a striking contrast with its light colorations and subtle pattern. This color combination flows throughout the space.

The capability to custom design cabinetry and custom cut granite gave the designers the ability to create the small island. Its round shape and petite size allow for adequate traffic flow throughout the kitchen while offering in-kitchen seating and additional food prep space closer to the integrated Sub-Zero refrigerator and Wolf gas range, the latter of which is accented with San Marco Silver .6x.6 mosaic tile. Its simple elegance adds a touch of glamour, while also being easy to clean. A custom stainless steel hood trimmed with wood to match the cabinetry serves as a focal point.

“One of the prettiest items in the kitchen is the refrigerator, which features custom designed panels,” says Darlene, adding that it was also recessed into the wall and accented with brushed nickel hardware. A complementary mix of Jeffrey Alexander and Emtek Satin Nickel hardware adds an Art Deco feel to the space.

Another stylish custom cabinet feature is the coffee station. Frosted glass door panels conceal several small appliances, including an espresso machine and microwave. “We even made a special drawer for coffee cups and tea supplies,” adds James. “This cabinet hides a lot of things that are difficult to design around.”

Because light – both natural and artificial – was so important to the design, the couple eliminated upper cabinets around the sink, giving them the ability to enlarge the window. Taking out the bulky corner oven also allowed for an additional window. “Adding more glass [windows] is something we try to do in a lot of our designs now,” says James. “It really opens up a kitchen.”

Removing wall cabinets makes efficient storage all the more important. As such, the remaining upper cabinets are extra tall and deep and base cabinets feature drawers, especially deep drawers, wherever possible. “We lean towards drawers in a lot of our designs because it’s one less motion that is needed to access contents,” he says. Accessories within the drawers offer specialized organization. Everything from spices to plates has its own place. “It’s so ingrained in people that plates need to be in an upper cabinet,” he says. “But having lived with plates in drawers, it makes so much more sense.”

Artificial lighting is as important as natural light to the design. Energy-saving LED recessed cans illuminate the kitchen while undercabinet and in-cabinet LEDs provide task and decorative lighting. “When the upper cabinets are lit, it creates a nice ambiance in the evening,” says Darlene. Above the island, a chrome chandelier with crystal accents adds a touch of glamour.

Details were also a critical part of the design. Multiple custom decorative panels – including those on the refrigerator, coffee station, Best ventilation hood and integrated Asko dishwasher – provide cohesiveness throughout the space. Furniture-style cabinetry with decorative accents adds architectural touches, as does the decorative column that supports the header for the new addition.