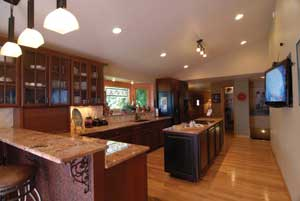 Jan Neiges, CKD, of The Kitchen & Bath Studio, designed this kitchen to be the opposite of its predecessor: open, light-filled, with plenty of work areas and places to sit and enjoy.

“I was called in to do the kitchen,” says Jan Neiges, CKD of Centennial, CO-based The Kitchen & Bath Studio. “But through talking with the client and assessing her needs for the space, and how the family dynamic was changing as her children were heading off to college, my design grew beyond the kitchen to include the surrounding rooms.”

By the time the project was underway, Neiges’ design for this suburban Denver home included the living room, the creation of a pantry and the enclosing of a porch. Additionally, she repositioned the dining room, and relocated a bedroom door.

Neiges, who has been a designer for 10 years, was hired for the project through a direct referral. “The homeowner was the best friend of the wife of a local contractor I have worked with. The contractor’s wife was impressed with the designs I did for her husband’s clients, and her friend was having a difficult time finding someone whose designs met her needs,” she says.

The existing kitchen was too dark because there were few windows, according to Neiges. “It was difficult for her to cook and entertain.”

Additionally the kitchen was badly positioned, landing right in the middle of the major traffic flow throughout the house. “In order to get to the master bedroom, dining room, basement, garage and back door, everyone had to pass through that small kitchen.”

Remodeling the kitchen involved major renovations, and the project lasted about nine months, according to the designer. “We reinforced the ceiling, removed walls in some places, added them in others. We built a new pantry closet, installed new wood floors throughout the living room, dining room, hallways and kitchen,” she says.

The existing dining room became the new kitchen. “The exterior wall was bumped out to increase space.”

In considering that move, the designer’s principal concern for the new kitchen was to avoid making the expanded space look like a shoebox. To remedy that, she planned one wall to the pantry on an angle, and made sure that the walls that were reduced in width created an intriguing view into the kitchen. She also kept the prep/cooking area of the kitchen hidden from the front entry view.

There were structural issues, as well. A beam that bisected the ceiling space between the existing kitchen – which had a low height – and the dining room where the kitchen would now be – which had a cathedral ceiling – needed to be addressed.

“We needed to increase the distance from the floor to the beam to make sure the tall cabinets in the new space fit properly. Everything hinged on making sure we could reduce that distance, because that was the best place to position the tall oven and fridge. It was also at the entrance of the new kitchen space,” says Neiges.

The clients had simple desires: more storage and a big island.

“We added a lift-up mixer, two base spice pull-outs, a lazy susan, a base tray divider, pull-out trays and deep drawers,” says Neiges. “The new space was longer than it was wide, so I wanted to avoid the shoebox look. We positioned most of the cabinets on one wall because I did not want the clients to have to walk through the kitchen work area to get from their bedroom to the living room or basement.

“I was concerned about the visual weight of the space being too heavy on the one side because all of the cabinets were on the sink wall. To avoid this, I created a peninsula to break up the space and added glass to the wall cabinets.” The cabinetry on the perimeter, from DeWils, is the company’s Kinsberry door in knotty alder.

The peninsula also provides a seating area for a quick meal, and is the improvement Neiges identifies as the homeowners’ favorite addition.

Neiges defines the style as transitional. “I took my inspiration from the existing bay window, through which you can see the garden. I wanted the sink positioned under that window, so I worked the space around that,” she says.

“Since the client is not afraid of color and had selected a jazzy granite color, we designed around that element.”

The centerpiece of the now 276-sq.-ft. kitchen is the island. The cabinetry from the perimeter is repeated in the island with a grape stain, and is topped with Firenze granite.

“The island looks toward the TV that is mounted on the wall – the peninsula is also positioned that way,” says Neiges.

There is another countertop area behind the eating bar for the clients’ pet supplies.

The real triumph of the kitchen is the added space and improved traffic flow, and the clients have made their satisfaction known.

Neiges concludes: “The client left a message for me over the holidays saying ‘I love my kitchen! I am making homemade ravioli and I love it; I have so much room now!’”