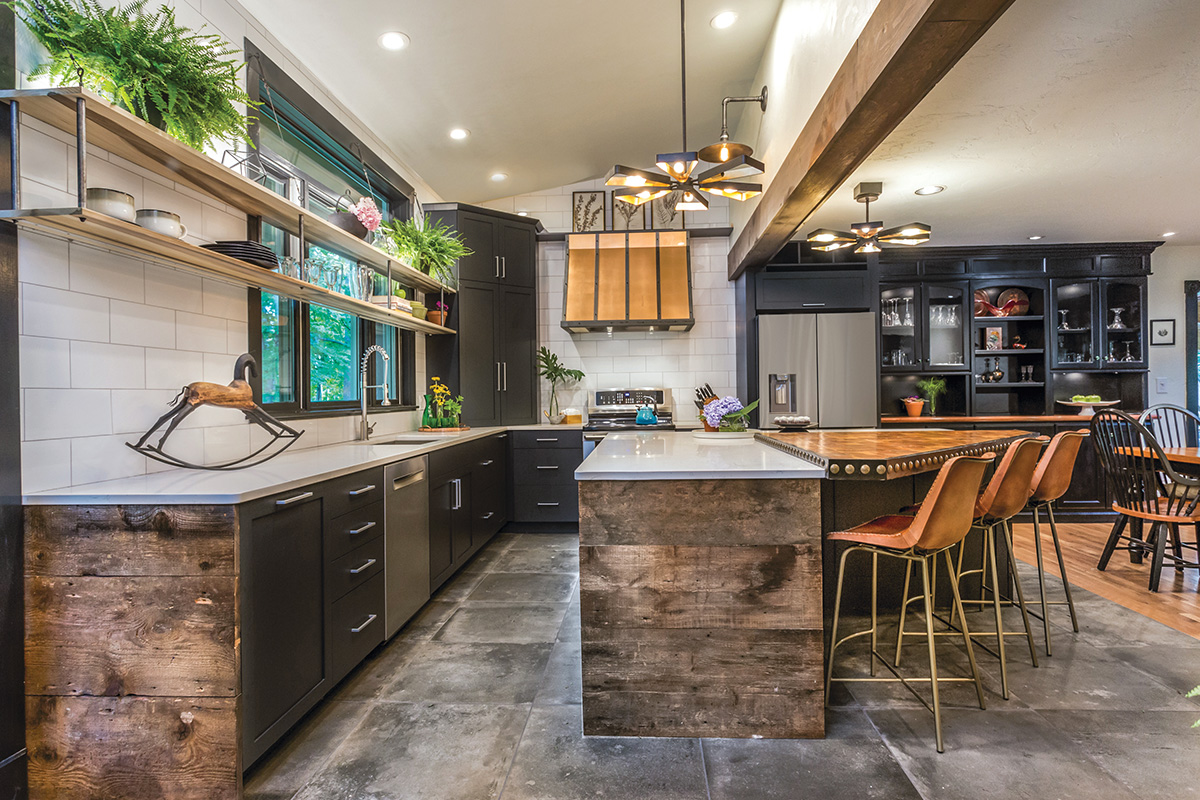 Windham, NH — When Heather Alton first met with her client, the designer sensed a bit of hesitation and outright aloofness about her kitchen renovation. But, as she later discovered, the single mother had previously approached other designers who just weren’t understanding what she wanted, so she always left disappointed with their ideas.

“At first she had her defenses up,” the designer with New England Design Elements, in Londonderry, NH, recalls. “She hadn’t been ‘wowed’ by anything she had seen so she wasn’t so sure we could meet her expectations either. 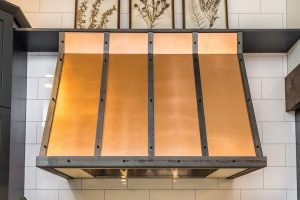 Alton’s client wanted a copper ventilation hood. However, since her budget didn’t allow for it, the designer fashioned one out of tile that resembles the metal at a fraction of the cost.

“She had seen our portfolio and she liked what she saw, so she gave us a chance,” Alton continues. “When I showed her our first suggestions for her kitchen, she was amazed and her mindset completely changed. She became an entirely different person to work with. She knew we understood what she wanted, so she stepped back and let us design based on her taste. When clients trust us like that, that’s when projects turn out the best!”

For this Windham, NH, kitchen – where Alton’s client lives with her daughter and cat – that meant a space that focused on wood combined with masculine undertones and an industrial vibe.

“She loves different types of wood, as well as metals,” Alton says.

As such, she grounded the kitchen with dark Cuisine Idéale cabinetry that features a Charcoal finish and Shaker-style, flat-panel doors and slab drawers that she accented with Richelieu hardware in Matte Silver. The cabinetry’s deep hue complements, but purposefully doesn’t match, the existing nearby hutch, which helped define the kitchen’s boundaries.

Alton furthered the wood elements by facing the island with salvaged wood from a demoed barn found locally. 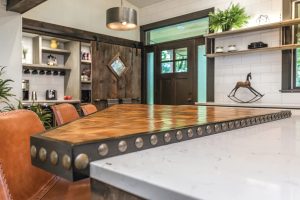 The raised seating area of the island is constructed from individual fir end-grain pieces. Alton trimmed the island’s triangular shape with a band of wood, accented with upholstery tacks.

“It came from a small mill down by the river,” she says. “It was raining when we picked it out and it was water stained, which was perfect for this project.”

The raised seating area of the island also showcases wood via the individual Kaswell fir end-grain pieces, which were sanded down to one level and finished on site. Alton trimmed the island’s triangular shape with a band of wood and accented it with upholstery tacks that match the inside of the dual Crystorama Luna six-light bronze and gold chandeliers that hover above. These lights complement the foyer light, which was the lone element preserved from the client’s previous kitchen.

“She loved the light and wanted to keep it,” she says. “It helped set the tone for the entire space.”

Alton and her client selected quartz, specifically Nustone Quartz in Bianco, as the island’s main work surface, as well as the perimeter countertop.

“We wanted something that contrasted with the dark elements in the kitchen,” she explains. “We also wanted something that was relatively plain, without a busy pattern because there’s a lot of countertop space and a lot of texture already going on. Plus, this particular quartz is reasonably priced, so it helped my client stay within budget.” 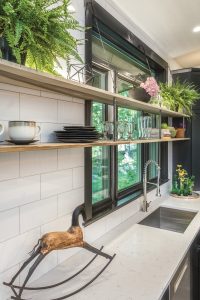 Wood shelves, which are oiled poplar supported by iron brackets, were a last-minute addition that the homeowner wasn’t on board with initially; however, now she loves them.

Alton echoed the countertop’s white hue on the walls, which she sheathed with 6″x12″ SOHO Tile’s Crystal Tech White Slim subway tile. “It’s a large kitchen,” says Alton. “I didn’t want a standard subway tile or a small-scale tile that would be too busy. I also wanted to bring the backsplash material into the pantry area to connect the two spaces…to marry them together (see sidebar, below). This large tile has more of a structural feel as well, so when you look at it, it looks less like tile and more like a wall.”

The designer also used SOHO tile, this time Alchemy Copper, to face the ventilation hood. “My client didn’t have a big wish list, but she did want a copper hood,” she says. “However, her budget just didn’t allow for it. She was content to settle for a stainless steel hood, but it just wouldn’t have worked with the rest of the kitchen so I suggested these tiles. They were a fraction of the cost of a copper hood…and even up close, they look like metal!”

Alton added metal accents to promote an industrial vibe, which the designer reiterated via the multi-level shelves that span the length of the wall, including across the windows. The wood shelves, which are oiled poplar supported by iron brackets and accented with LED light strips, were a last-minute addition that the homeowner admittedly wasn’t on board with initially.

“Now she loves them,” she says. “They provide a sight line for the space and their positioning doesn’t affect her view.”

Finishing touches include a newly faced ceiling beam that is sheathed in wood and stained to coordinate with other wood elements within the space. Alton added a new beam above the pantry to tie it into the kitchen. For the floor, Alton specified large-format 24″x24″ porcelain tile, specifically Eleganza Varese Grafite, that resembles concrete to enhance the industrial look.

“There are definitely a lot of different materials that provide texture to the space,” she continues. “But it’s the use of all of these materials that really make the design stand out. This entire kitchen is very ‘her.’ It includes a lot of things my client loves. At the end of the day, it’s very personally constructed…definitely not cookie cutter!” ▪