Kitchen Seen as Most ‘Worthwhile’ Remodel

Complete kitchen renovations top the list of the most 'worthwhile' interior projects and bring homeowners the greatest joy, according to a new survey. Photo: Courtesy of Omega Cabinetry

WASHINGTON, DC — Homeowners who decide to undergo a home improvement project often find that the task was worth the investment and time, with complete kitchen renovations topping the list of the most worthwhile interior projects.

That’s the key finding of the 2019 Remodeling Impact Report, based on an online survey conducted this summer by the National Association of Realtors and the National Association of the Remodeling Industry. The report, which surveyed realtors, NARI members and homeowners, examines a variety of remodeling projects, ranking the appeal of a project, its value in terms of resale and its overall functionality. The findings also reveal the reasons for remodeling, the success of taking on the project and the increased happiness upon completion of the job.

After completing a remodeling project, 74% of surveyed homeowners have a greater desire to be in their home, 65% say they experience increased enjoyment and 77% feel a major sense of accomplishment, according to the survey. In addition, 58% report a feeling of happiness when they see their completed projects, while 38% say they have a feeling of satisfaction. 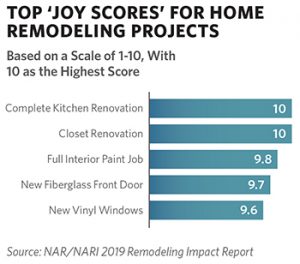 NAR calculated what it referred to as a “Joy Score” for each project. The score, based on a scale from 1-10, gauges the happiness homeowners reported with their renovations. Interior projects that received the highest “Joy Scores” included complete kitchen renovations, closet renovations, full interior and individual room paint jobs, kitchen upgrades and basement conversions to living areas (see graph at left).

A complete kitchen renovation received a top Joy Score of 10. Ninety-three percent of those polled said they have a greater desire to be at home since the completion of their kitchen, and 95% said they have an increased sense of enjoyment when at home, the survey found.

The most important result of a kitchen renovation is improved functionality and livability, according to 46% of those polled. As to the reasons why they decided to take on the project, 24% said they wanted to upgrade worn-out surfaces and materials. Another 20% reported they had recently moved into their home and had a desire to customize the kitchen to their personal tastes.

“The kitchen is a space that homeowners frequent regularly throughout the course of the day,” said Lawrence Yun, chief economist for the Washington, DC-based NAR. “When that area is remodeled to owners’ exact preferences, they continually experience the satisfaction of a job well done.”

“Kitchens serve as the ‘heart of the home’ for many, and whether you like to entertain or cook, updating a kitchen ensures greater access and use as homeowners age, especially when the upgrades take accessibility into account,” noted NARI President Robert Kirsic.

“Realtors and homeowners alike recognize the value of taking on a major home remodeling project,” said NAR President John Smaby. “While these tasks can be time-consuming and costly, the projects are well worth the temporary inconveniences and the final products ultimately reward us with feelings of accomplishment, satisfaction and higher home values.”

“The report shows us that people often remodel for resale purposes, but it also reminds us that homeowners remodel, too, with the desire to make a home their own,” Yun added. ▪