Smart appliances continue to change the way even simple tasks are completed in the kitchen.

Nicole Sirek has noticed a trend toward speed ovens and steam/convection ovens, such as these Wolf units in the Partners 4, Design showroom, which are paired with a paneled Sub-Zero refrigerator and freezer and a Wolf flush-installed gas cooktop. She classifies speed and steam ovens as smart given their ability to multi-task as well as speed up and/or change the cooking process.

A conversation with designers about smart kitchen appliances can divert rather quickly into a number of different directions, considering the many different ways to define them. For some, it’s about appliances that can ‘talk’ to each other, without any human interaction, such as the communication that happens between a cooktop and a ventilation hood to automatically control functions of the latter. For others, it’s about appliances that are controlled remotely via an app on a smart device, for instance, allowing the user to preheat an oven before heading home after a long day at the office.

Yet another definition relates to appliances that have the ability to learn via complex algorithms, such as an oven that recognizes that its bacon baking program needs to be adjusted when someone starts baking thicker slices of bacon. Additionally, smart technology can be used for remote diagnostics and monitoring, for example, to send alerts if the dishwasher has sprung a leak or a refrigerator door is left open. Some designers also consider multi-tasking appliances, such as steam/convection ovens and speed ovens, to be ‘smart.’ Ultimately, for many, being smart is a combination of any and/or all of these examples. 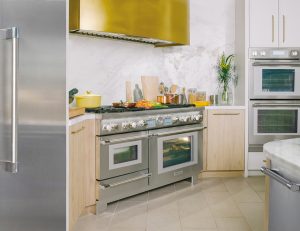 Because of their relatively remote location in Juneau, AK, Jeremy Bauer and Jason Clifton often discuss smart features with their clients, including those that can be found in products such as this Thermador 60″ Pro Grand dual-fuel steam range.
Photos: Courtesy of Thermador

“None of these definitions are wrong,” adds Scott Koehler, owner/designer of Dream Kitchen Builders in Whispering Pines, NC. “The word ‘smart’ means so many different things these days. It’s more of a blanket term.”

What does seem to be shared is an agreement that smart appliances can do some pretty amazing and extraordinary things. There also seems to be a consensus that, despite the high level of technology that many consumers enjoy in their lives, they are usually not the first to broach the subject when it comes to smart cooking, cleaning and cooling.

“Unless someone is going out and looking for it, they really don’t know about what’s available, so it’s usually up to us as designers to ask questions and educate clients about how smart appliances can benefit their lives,” says Gallagher.

Even so, there is a growing expectation that appliances will be smart, led, in part, by the trend toward smart homes.

“For the last few years, one of nation’s top 10 home builders has been including smart lighting, security, HVAC and locks as standard features,” says Koehler. “When a company of that size starts doing ‘smart’ as standard, that says something.” 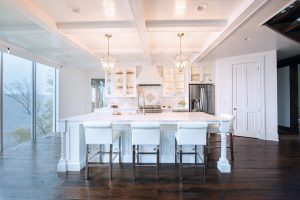 There is a growing expectation and acceptance from consumers that kitchen appliances will be smart, led, in part, by the trend toward homes with other smart features, including lighting, security, HVAC and locks, according to Scott Koehler, who designed these kitchens with smart LED lighting.
Photos: Jonathan McCardell, McCardell Photography

Jeremy Bauer concurs: “The smart kitchen is following suit to the smart home where it gets to know you and your likes and dislikes,” says the designer, who founded Bauer/Clifton Interiors in Juneau, AK with fellow principal designer Jason Clifton. “We’re finding that almost all major kitchen appliances are migrating and evolving into the smart category, even small appliances. It has really opened up the market for consumers to find which exact appliance best fits their needs and overall lifestyles.”

“Initially smart technology may sound like a lot of bells and whistles,” adds Clifton who, with Bauer, is a member of Thermador’s Design Council. “But it can be very beneficial to people’s lives and it shouldn’t just be overlooked.”

However, several designers indicate that, at this point in time, many of their clients seem to be most interested in relatively practical levels of smart.

“We seem to be moving away from gadgetry and into more real-use cases,” Koehler says, adding that he feels consumers are nearing the tipping point where smart technology is progressing from the early adopters phase and into more mainstream acceptance.

Remote diagnostics and monitoring are great examples, Koehler adds. “We are all busy,” he continues. “People are looking for anything that can save time as well money. In the case of remote diagnostics, they can save both because a problem can be identified remotely and a new part ordered before a repairman ever makes a service call.”

Matt Wolf, DCI Home Resource in Charlotte, NC, agrees. “The culture of smart technology is ever-changing,” he believes. “Everyone is racing to push the limits and see what they can offer next.

“However, our clients don’t necessarily want a smart refrigerator that has a screen for entertainment or that tracks what’s inside,” he continues. “Instead, they are more appreciative of a smart appliance with remote monitoring that can give an early warning of a service issue before an appliance actually breaks or needs a repair, since it’s always best if something can be addressed prior to an appliance going down.”

Monitoring is done seamlessly in the background using the home’s WiFi to communicate with the manufacturer, he explains.

“For example, a smart Miele refrigerator in a client’s home can communicate with the company and, if it isn’t operating optimally, or if it needs service, someone at Miele can then call the homeowner,” Wolf adds.

Matt Wolf’s clients are appreciative of smart appliances with remote monitoring, such as this Miele smart refrigerator that can provide homeowners with an early warning of any service issues so they can be addressed quickly.
Photo: Courtesy of Miele

Nicole Sirek, NCIDQ/ASID/senior project manager, Partners 4, Design, in Minneapolis, MN, concurs. “We have clients who have multiple homes,” she says. “Having smart technology that can tell them the refrigerator in their home in California isn’t working or if a waterline is disconnected can be useful, if, for example, a client has guests staying at the home, ahead of their arrival. Also, getting alerts about a temperature drop or an open oven door can be helpful. We do find homeowners using these types of functions.”

Similarly, Bauer and Clifton find that their relatively remote location is the perfect reason to consider the benefits of remote diagnostics and monitoring.

“Our clients don’t always have ready access to service techs, so when we bring up features such as remote diagnostics and how a company can dial right into an appliance to diagnose problems offsite, we often get the ‘eyebrow raise’ from clients who want to learn more,” says Bauer.

“We are currently working with a client who is building a luxury lodge in a very remote area of Alaska,” adds Clifton. “The only way in is by float plane, and there are no service techs. When we first talked about an appliance package, they wanted the most basic units possible. But when we brought up the benefits of remote diagnostics and educated them about the technology, they were fully on board and we set them up with an entire Thermador package.”

“People spend so much time in the kitchen and they are looking to do more interesting, different and sophisticated things, especially with something like an oven,” says Koehler. “Smart appliances allow them to automate basic tasks so they can spend time doing things they like to do, rather than simply repetitive tasks.”

Gallagher references smart microwaves that can scan packaging and adjust cooking time and temperature according to package directions.

“We live in such a fast-paced environment that anything that can speed up the cooking process but still allow us to eat well and healthy…that’s huge,” she continues. “We’re always running, running, running and relying on fast food. But that isn’t necessarily conducive to a healthy lifestyle, especially for people who might have certain dietary requirements, such as gluten-free eating.”

Sirek has noticed a trend toward speed ovens and steam/convection ovens, which she classifies as smart given their ability to multi-task as well as speed up and/or change the cooking process.

“These appliances can do multiple functions, which means you can remove a microwave or second oven from the appliance list,” she says. “That is particularly beneficial in smaller kitchens where clients are interested in maximizing space.”

Ultimately, they also allow clients to eat healthier, she indicates.

“The interest here is about health and wellness,” she explains. “Speed ovens and steam ovens do cook food faster, but they also make certain foods like leftovers taste more like they did when they were originally cooked.”

Many manufacturers also offer app-driven remote control of appliances, giving people power over everything from their dishwashers and ovens to their coffee makers…all from beyond the confines of the kitchen.

“Maybe someone has kids who are involved in different sports activities that take them in multiple directions at multiple times,” says Gallagher. “A huge benefit to them could be an app for their oven so that when they are on their way home from soccer practice, they can preheat the oven from their phone so it’s ready when they get home.”

While Gallagher notes that it’s typically younger clients, as well as those who are interested in energy efficiency, who are top of mind when it comes to smart appliances, the designer indicates that clients with disabilities or those who want to age in place are often an overlooked segment of the population that can benefit from app-controlled features.

“If someone is older or is in a wheelchair, they may not be very mobile,” she explains. “Being able to preheat an oven or start a dishwasher from the couch can be a great benefit to them.”

Bauer and Clifton are also proponents of the convenience, as well as the precision, that can be achieved via an app and smart appliance.

“It’s also about convenience,” adds Clifton. “Say, for example, you have a busy morning and rush out the door to get to the office. When you sit down, you recall that you forgot to turn on the dishwasher. Or, at the end of the day, in the rush to get the kids to bed, you find yourself finally in bed yourself and realize that you forgot to turn on the dishwasher. With either scenario, you can simply operate the appliance directly from your smart device, without any inconvenience or even having to get out of bed.

“Likewise, with Thermador’s built-in coffee machine, you can be in another part of the house and have the perfect cup of cappuccino or espresso ready and waiting for you when you come into the kitchen,” he continues. “The machine also allows multiple people to have their favorite, set to their individual preference. Or, with the Home Connect app, you can discover different coffee drinks from around the world and create them yourself using the app. Sometimes, it’s the little touches that make life easier.” ▪