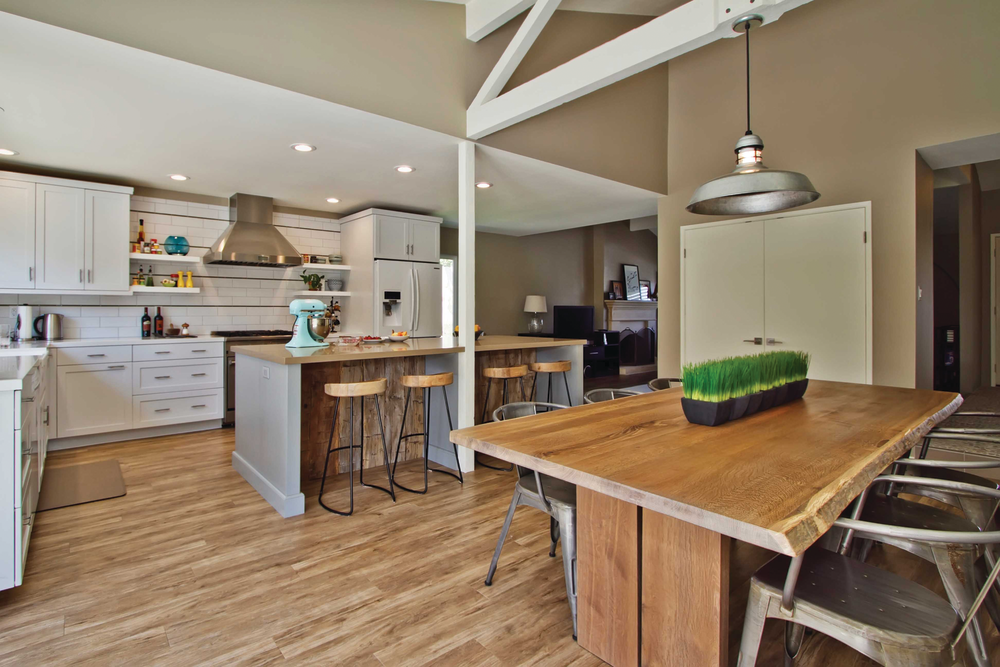 This kitchen’s imaginative union of modern and rustic perspectives was achieved by blending natural elements, such as the warm texture of the island’s reclaimed-wood backdrop, with clean lines, neutral colors and an open floor plan. Wood vinyl flooring is the ideal choice for a home with an active pet. A pantry wall in the old kitchen was removed to gain more space. The ceiling was opened up and beams were left exposed. A generous island seats four and contains display space, functionality and storage, including rollouts in every cabinet.

The clients now love coming home to a kitchen that has become their oasis, which they often share with friends and family. Structural changes created more visual harmony with the outdoors and with the living and dining areas. Using glass in the cabinetry amplifies the sense of light and air. Cherry hardwood floors used elsewhere in the home were added to the kitchen for visual unity. The new open layout was carefully planned for efficiency and ease while cooking and entertaining.

This professional couple was somewhat embarrassed by a tiny, compartmentalized kitchen with dated finishes. The wall between the kitchen and living room was removed and a new pantry now takes the place of the original wet bar and sink under the stairs. The steep stairs, which were in violation of code, were reworked and extended into the entry hallway with an extra riser and tread for comfort and safety. New open stairs, railings and newel posts lend an elegant air to the entry hall.

To meet the client’s goals, the galley kitchen walls were removed to integrate the space into the living area. Moving the range, sink and dishwasher locations to the other side of the kitchen and maintaining a work triangle in a tight space proved challenging. The solution was to create banquette benches with a two-part assembly. The table has a routed groove design to fit on the “wall insert hardware” with a cleat that supports the top, which is the solid cherry tabletop.