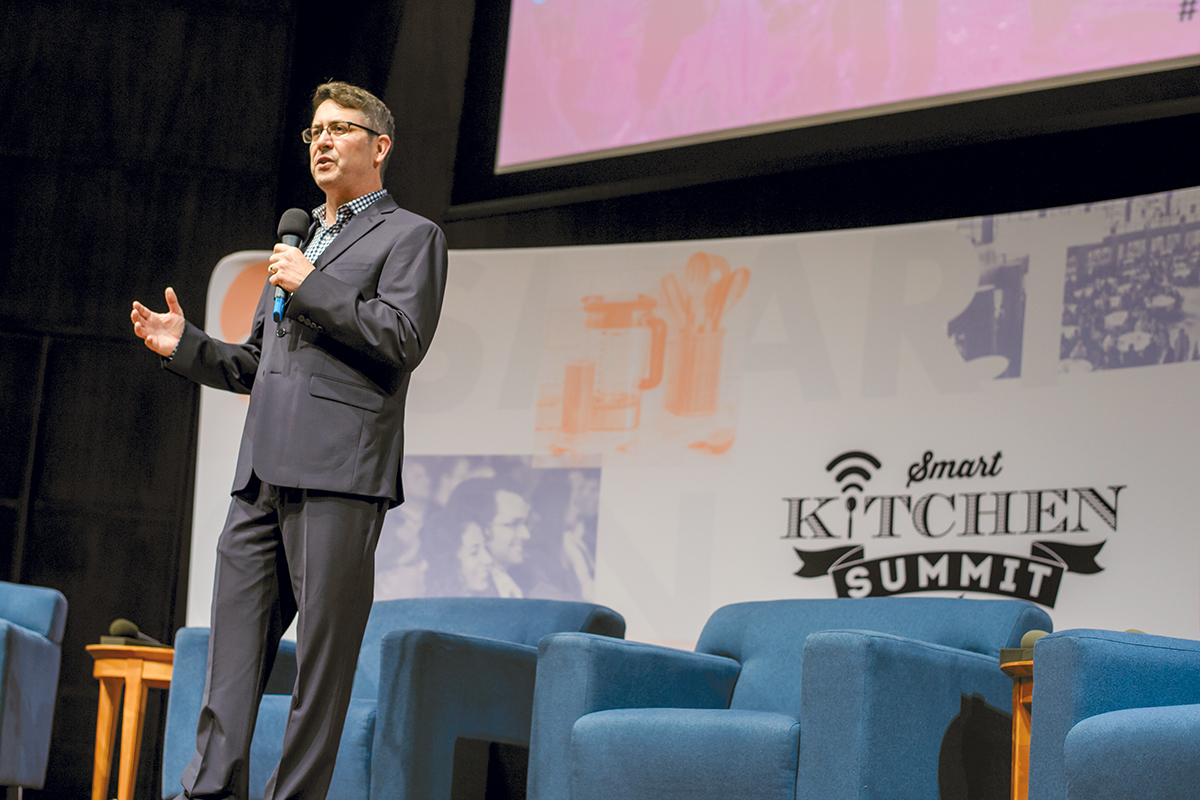 If you thought the kitchen of the future was all about connection, you might be in for a surprise. While the connected kitchen remains a hot trend, the future is moving beyond simple connectedness into the realm of artificial intelligence – where everything from appliances to coffee mugs may not only connect, but also think, negotiate and act.

The kitchen – and the food industry at large – continues to get smarter all the time, with the future promising a plethora of innovations that will ultimately change how people buy, store, cook and consume food – which will, in turn, impact how kitchens are planned and designed.

This is the concept behind the recent Smart Kitchen Summit, which offers a platform each year for some of the leading visionaries from the culinary, packaged food, appliance and delivery arenas to discuss how they are reinventing themselves and their industries. Startup companies, inventors, kitchen designers, technology experts, appliance manufacturers, chefs, and other cooking and food professionals were all on hand to get a glimpse of the future of the smart kitchen, and what this might mean to the industry as a whole.

Launched in 2015, the Smart Kitchen Summit was designed to bring together those interested in how technology and innovation are helping people to rethink old approaches in the world of food and cooking.

Since its inception, the event has doubled in size and expanded to two days, according to event creator and curator Michael Wolf, with this year’s event in Seattle drawing 600+ attendees, 20 sponsors (including names ranging from Amazon to Whirlpool and Kenmore), and a startup demo event that brought in 15 of the newest startups across the kitchen and food tech space.

But while technology is a hot market, technology for technology’s sake alone is destined to fail, Wolf believes. Rather, he said, the companies and products that find success do so “not only by having enthusiastic communities around their products, but because they’ve solved a problem a lot of people have strong interest in.”

One such example was seen in the winner of the Startup Showcase, sponsored by Campbell Soup Co. – an indoor food cultivation platform from Verdical that garnered the top prize of $10,000. The company’s mission is “to simplify the produce growing process to bring indoor food cultivation to the kitchen” – an idea that could have a huge impact on kitchen design, giving a whole new meaning to “bringing the outdoors in.”

The product allows users to grow fresh ingredients in hydroponic columns in their kitchens using horticultural LEDs and various sensors.

Speakers at the event included a wide cross section of the food and kitchen industry, from chefs and technology experts to product manufacturers and media. One such speaker, Richard Gunther, director of client experience at the Denver, CO-based Universal Mind, and editor of “The Digital Media Zone,” acknowledged that new technology is redefining not just how products are made, but how the industry will have to evolve to stay connected.

Unlike products of the past, in which upgrades might happen to future models, with connected appliances, upgrades are a continuous process and require creating and maintaining back-end software services, and possibly maintaining and updating device firmware and customer-facing apps, he added.

THE KITCHEN OF THE FUTURE

A key focus of the summit was to look at where technology is taking the industry, and what it will mean for the kitchen of the future. And for that, it’s impossible to ignore the huge trend toward connectedness. Indeed, in her talk, “Imagining a Smart Kitchen Future,” Rebeca Chesney, research director of Institute for the Future, noted that there are currently 8.4 billion connected devices in use in 2017 – yet the entire global population is only 7.6 billion people.

And, as she pointed out, “For many people, the kitchen is one of the first places we see the adoption of technology in the home.” From crockpots and waffle makers, to connected refrigerators that become an active part of the information ecology, internet connectivity has completely changed the face of the appliance industry, she stated.

That trend is only expected to grow, from refrigerators that allow users to check the weather and listen to music to trash disposals with sensors that track what’s being thrown away, everything is getting more connected. As Chesney noted, “Basically this [connected technology] is turning everything in our physical environments into information capture tools and information sharing tools.”

And, she added, “These devices are no longer just being connected. We’re creating entirely new capabilities and roles that these devices are playing in our lives. Ovens aren’t just connected; they’re intelligently engineered. They’re adaptive. So the next thing we’re going to be seeing in the next few years is that we are going from ‘the internet of things’ to ‘the internet of intelligent things.’”

As an example, she referenced the June oven, which “automatically updates as it’s cooking; it knows what’s in the oven, and you don’t have to do anything to cook something very well.” She sees a combination of sensing technology and digital recipes being used to create these intelligent devices.

She continued, “With Alexa and Google Home, we’re actually creating these new actors in our kitchens, we’re talking to them and they’re talking back to us…and this is going to continue to proliferate in the next decade. We’re not just connecting more things to the internet, we’re connecting them to artificial intelligence (AI), so they’re becoming virtual assistants in our life.”

With more patents for AI, prices are expected to come down as well, which will fuel the growing interest in products that just keep getting smarter.

As such, she believes, “What we’re going to see in the next five or seven to 10 years is that these are going to become much more powerful; it’s not just the oven that will be embedded with intelligence, it will be lots of things. It might be the package the blueberries come in, it might the coffee mug – all of these things are going to be connected, and intelligent. And this gets us into the third wave of the internet, the ‘internet of actions’ – creating a distributed global network of autonomous robots and intelligent systems.”

She sees these advances across technology leading to a world in which inanimate objects can speak, bots can work on our behalf and networked machines can negotiate with each other on our behalf. As an example, she cited the idea of a washing machine and a TV negotiating which appliance gets more power at any given time in order to save energy in the home, or a washing machine ordering its own detergent, and negotiating with services to order its own maintenance or downloads and updates.

So what’s the downside to all of this? For one thing, as she pointed out, just because you can automate something doesn’t necessarily mean you should. Some people want to cook for their families; it’s part of the experience of sharing their home and their life and their love. Some fear privacy concerns. And while efficiency and convenience are certainly valuable, they aren’t the only thing that matters – and for some people, they may not be what matters most.

Ultimately, she said, it’s important to look at values. For some, values might be connecting with a culinary heritage, or cooking with friends or family, or recreating childhood memories. And no matter how futuristic, the kitchen experience needs to take this into consideration. ▪