PALO ALTO, CA — An ongoing construction labor shortage is affecting the speed and cost of home renovation projects, although the impact on project quality and customer satisfaction is apparently minimal. 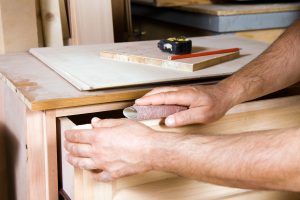 That’s the key finding of the latest in a quarterly series of “Renovation Barometers” conducted by Houzz, the Palo Alto, CA-based online community focused on architecture, interior design, home improvement and related topics. The barometer, released in late November, covered the third quarter of 2016 and provided feedback from more than 2,500 architects, designers, residential remodelers, design-build firms and related professionals.

According to Houzz, 78% of the general contractors, remodelers and design-build firms surveyed reported labor shortages in the third quarter of 2016. Carpenters were reported in shortest supply. And among those firms reporting moderate to severe shortages, 42% said finish carpenters were especially hard to find. Thirty-five percent reported difficulty hiring general laborers, and 26% reported problems finding qualified framers.

Among the building professionals who reported moderate to severe shortages of workers in the specialized trades, as well as among general laborers, 59% said the lack is having an impact on project cost (see related graph, below). Half said the problem is affecting project length. However, despite its economic impact, comparatively few firms reported that the labor force squeeze is affecting project quality (10%) or customer satisfaction (11%). 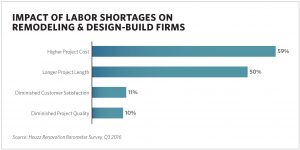 “The sustained growth in consumer demand for residential remodeling services is naturally driving prices for remodeling services up. Yet, with systematic labor shortages and no major shift in labor conditions expected in the near-term, consumers will continue to experience significant increases in project costs and difficulty finding qualified remodelers,” said Nino Sitchinava, principal economist at Houzz.

Sitchinava noted that residential remodelers, including kitchen and bath design professionals, “will continue to be squeezed to do more with less, be more selective about the nature of projects they take on, and be more cautious about committing to project cost and timeline estimates.”

Other findings from the Houzz survey were as follows: